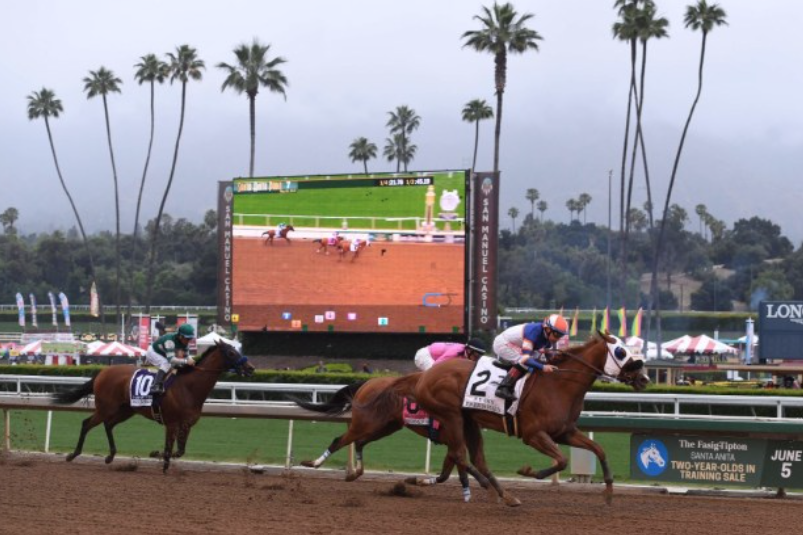 ANIMAL WATCH-On January 9, Commissioner Roger Wolfson of the Los Angeles Animal Services Commission requested discussion of a horse racing ban in the City of Los Angeles be agendized soon, in view of the recent deaths of horses at nearby Santa Anita.

General Manager Brenda Barnette initially suggested that the department doesn’t have sufficient staffing to write a report, but she could talk to a Councilmember to try to speed up the process by having the proposal introduced directly in Council.

Undoubtedly, she was referring to Personnel and Animal Welfare Committee chairman Paul Koretz, who is one of the nation's “ban leaders” and was the power behind outlawing cat declawing, use of bull hooks on elephants, selling puppies, kittens and bunnies in pet shops, and the sale of fur in Los Angeles.

Wolfson passionately rejected that idea, stating he believes approval of a motion for the first city in America to ban horseracing should be "considered and finished here” -- in other words, introduced and approved by the Commission -- and then forwarded to Council.

He, or other supporters, apparently followed up with disclosures to the news media. and notices of his intended "ban" appeared as far away as the NY Post, which announced, "Commissioner of the Board of Animal Services, Roger Wolfson, who initiated the motion, told City News Service, ‘This wasn’t a political calculation. Look, 30 horses have died at Santa Anita, that’s a nearby city.’"

The Post pointed out, "Santa Anita Park, though a short drive from Los Angeles, would not be affected by the potential ban since it’s in the city of Arcadia."

But that's not the way the item appeared on the Commission agenda for January 23, which read, "Opposition to Horse Racing in the State of California. (Action Item)."

An opponent at the January 23 Commission meeting, where "Opposition to Horse Racing in the State of California" was formally agendized, suggested a more self-serving reason for Wolfson's insistence on introducing this motion.

Karen Norton, speaking as a horse owner and supporter of horse racing, finished a passionate and pointed statement at the meeting, "The action item to ban horse racing in the city of Los Angeles would be solving a problem you don’t have and staging a public event designed to further someone’s person agenda and political career in order to get a headline.”

Indeed, the presence of a packed room of proponents and major TV cameras at the evening South Los Angeles animal shelter hearing--without an official media release by the Department--appeared to support her contention and was reminiscent of Wolfson's failed publicity efforts to gain support for forcing dogs in all of the City's shelters to be fed only vegan (non-meat) food, which whimpered into silence under strong management and public opposition. (See: LA Animal Services' Vegan Dog Food Fight Gets Ugly ...)

THE SETTING FOR OPPOSING HORSE RACING IN CA

The South Los Angeles Chesterfield Square Animal Center, at which the hearing was scheduled at 7:00 p.m., is in one of the city's most ethnically diverse and economically challenged areas, which the L.A. Times Crime Map ranks #1 in per capita violent crimes in the entire city, including the period ending in June 2019.

The small hearing room was packed with many faces not seen before, and evoked a caustic public comment by one of LA City Hall's gadflies who assumed a southern accent and thanked attendees for coming this far "south," implying that the poverty, depression, roaming hungry stray and abandoned pets, and sense of hopelessness in much of the bleak community surrounding the animal shelter is a stark contrast to the opulence and pageantry of the horse racing industry.

It was agreed that each side would have three minutes to be represented by a selected speaker(s) and, thereafter, each of the 35 individuals signed up would have one minute. (The following are excerpts, not a transcript. The audio of the entire meeting may be heard here.)

Only three members of the five-member Commission were present: President Larry Gross and Commissioners Roger Wolfson and Jose Sandoval. Although a majority of the Commissioners is sufficient for an official meeting, the three-vote rule for passage still applies. Therefore, this motion would require all three who were present to vote "Aye" for passage of any item.

Commissioner Wolfson made an introduction of his motion with a personal proclamation:

“This is the kind of evening that makes me proud, when democracy can flourish on the local and national level. . . It may be somewhat symbolic because Los Angeles doesn’t have a racetrack but for me and many in this forum, it is not symbolic. With so many horses dying, it is not symbolic."

He stressed that the current practices of mistreatment of racehorses are inhumane and causing injury, suffering and death, and stressed that one of the reasons for this being brought as a motion to the Commission is that "animals cannot make informed consent."

Gross thanked Commissioner Wolfson for his commitment and caring and acknowledged, "Everyone in this room is concerned about the welfare of horses, but this issue is a more complex."

"I am not involved and have never been to a horse race," he said. However, he explained that he heads one of the largest local tenants' rights organizations and has serious concerns for those who work at the lower-level support jobs for this industry who would lose their jobs, which he called "an eviction notice."

"Horse racing in California provides 77,000 jobs, including 3,000 to families with low-paying positions," he stated, adding that, "the horse racing industry provides housing and medical insurance for many of its employees and educational opportunities for families.

Most of these will have very few job options if the track closes. Losing their jobs would be an eviction notice because they cannot pay their rent. We already have thousands of homeless individuals and families on the streets of Los Angeles."

He emphasized that, as a Commission, "While we have a commitment to insure [sic] the safety of animals, one of our priorities in also addressing homeless people.  We need to be very careful and thoughtful. We have an obligation to assure that every one of these 77,000 people has a job waiting.

DISCOVERY-THERE WAS NO MOTION TO CONSIDER

After Wolfson acknowledged Gross' concerns, he suggested support might be expressed as, "We are proponents of banning..." And that the Commission approve the motion before it.

They then acknowledged with surprise, "There is no motion."

Wolfson, a professional screenwriter, turned to his omnipresent laptop to write one. After stumbling through various renditions, which included:

It is the consensus of this Commission as the largest Animal Rights Department on the West Coast that horse racing in its current form should not be allowed within the city limits and requests that the City Council explore and support this policy.

They finally agreed on:

“It is the consensus of this Commission that horse racing in its current form is not humane and should not be allowed in the City limits and that the City Council explore and confirm this policy.”

SPEAKERS IN SUPPORT AND OPPOSITION

Veterinarian Heather Wilson of Horseracing Wrongs spoke for the proponents, stating that racehorses live a lifetime of abuse and cruelty and isolation.

She stressed that the animals are deprived of normal activity such as grazing and socialization; they are not allowed to have a family. They have no autonomy and get two hours of exercise a day while the rest is spent in a stall in isolation. They begin training at 18 months and race at 24 months…while they are still babies. Many will end up at auction after a very short life. When nobody buys them or adopts them, they are sold to the highest bidder, known as a “kill buyer.”

She added that 130,000 horses are shipped to slaughter in Mexico and Canada annually, and 15,000 are thoroughbreds.

She concluded by reminding the Commission that there are four major racetracks in California, not just Santa Anita and that this "sport" should be abolished--there is no reason for it.

Oscar de la Torre, who represents Santa Anita's Backstretch Workers, stated that, "The compassion that we have for the horses should also transfer to the individuals who take care of the horses and whose livelihood is at stake. There are more than 3,000 backstretch workers at Santa Anita, who do everything from grooming horses to feeding and cleaning up after them. Most workers are originally from Central America and 80% live at the track, and, if Santa Anita were to be closed, most of the workers would be homeless...and being homeless in Los Angeles is a death sentence."

Karen Norton, who described herself as a "horse owner," thanked the Commission for its service to animals, and stated,

Los Angeles does not have a horse racing track and there never will be one in the City.

Because your jurisdiction is Los Angeles, not Cypress or Arcadia, to pass a motion to ban horse racing would be solving a problem you don’t have ... and staging a public event designed  to further someone’s personal agenda and political career in order to get headlines".[Emph. added.]

Approximately 35 speakers were allowed to speak, with the largest number in support of the opposition/ban of horse racing in California. Others were representatives of the horse racing industry who assured that the horses are given care and are not mistreated.

VIOLATION OF THE BROWN ACT

Approximately half way through the speakers for and against, it was brought to the Commission's attention that they were in violation of the Brown Act, because the agenda stated that the item is "Opposition to horse racing in the State of California," but the motion being considered only addressed horse racing in the City of Los Angeles.

The motion was then changed, with the approval of Assistant City Attorney Dov Lesel.

Wolfson moved "to oppose horse racing in the State of California and request that the City Council explore and confirm this policy." It was seconded by Commissioner Sandoval.

Aside from Commissioner Wolfson suggesting that California racetracks could be turned into "sanctuaries," as was done in Asia for retired elephants, an idea which President Gross dismissed as "good on paper or in our dreams," further discussion was uneventful and a vote was taken.

Commissioners Wolfson and Sandoval approved the motion; President Gross voted against it. Therefore, the motion failed.

Wolfson requested that this be put on the agenda again when there was a full board in attendance.

If this was a publicity stunt, the outcome (benefit or failure) remains in the eyes of the beholder.

According to, The Sport of Kings in the City of Angels, there has not been a racetrack in Los Angeles since the Agricultural Park was transformed into Exposition Park, and replaced with museums and gardens in the early 1900s.