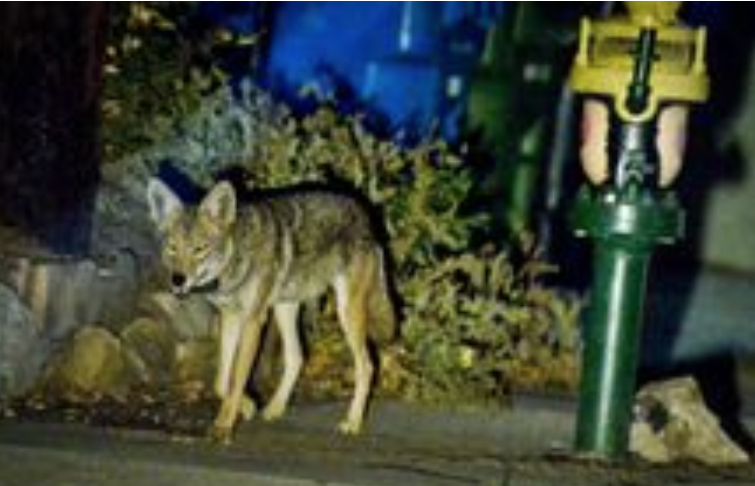 ANIMAL WATCH-Los Angeles Animal Services' General Manager Brenda Barnette states on the LAAS website “Coyote page” that the department's goal is "to educate the public by fostering a relationship of mutual respect between wildlife and the community so we can live together safely," but apparently Southern California coyotes have a much different definition of respect and safety...AND they are known vectors for rabies.

"Any warm-blooded mammal can carry or contract rabies, but the primary carriers in North America are raccoons, skunks, bats, foxes and coyotes. Thanks to an increase in pet vaccinations, wildlife now account for more than 90 percent of all reported rabies cases, states the Humane Society of the United States.

COYOTES NOT RESPECTERS OF PROPERTY OR PETS

On June 22, 2019, Los Angeles-area residents expressed shock and fear when a coyote forced its way through a five-inch opening in a glass-door into a San Dimas home (30 miles east of downtown LA) and ripped apart their tiny, defenseless “rescued” Yorkshire terrier, Noah. They learned later that an earlier similar entry and attack in a neighboring home had killed another dog. Noah's collar and remains were found on the opposite side of the complex.

The family's veterinarian stated that the reason for the bold entry into a home was because there are hungry pups to feed this time of year. However, that would not explain the following daytime leap into a well-secured yard in January 2019.

A longtime resident of Valencia (31 miles northwest of downtown LA) alerted FOX News on January 19, that a coyote jumped or climbed over their high block wall into the backyard during the morning and attacked their 9-year-old dog. However, the dog's piercing cries brought her husband outside, causing the coyote to escape. The owner told Fox11 she's lived there for five years and has seen coyotes, but "never one this close -- jumping her back fence and preying on her two dogs."

Although most attacks are not reported, she wanted other Los Angeles County residents to be aware and guard their pets carefully, even in their own fenced yards.

NOBODY HAS AN ANSWER THAT THE COYOTE UNDERSTANDS

In a March 15, 2018, KPCC discussion, Emily Guerin explored, "Why California officials are killing coyote, after coyote, after coyote? Here are important excerpts explaining why Los Angeles seems to be totally unsure why the coyote attacks are seemingly increasing, and experts don't have an answer as to why.

In March 2018, a 5-year-old boy and his father were walking on the campus of Cal State Los Angeles, a very urban area, when a coyote came up from behind and bit the boy on the leg. The boy was taken to the hospital for rabies-prevention treatment. A university police officer shot his rifle at the coyote when it was later seen stalking a woman but escaped.

Wildlife Services, a federal agency whose mandate is to "resolve wildlife conflicts to allow people and wildlife to coexist," says they'll use animal calls to lure coyotes in. Because they're so difficult to trap, officials often end up shooting them instead.

People vehemently disagree about whether this is the best approach to deal with aggressive coyotes. In an interview with KPCC last April, "Niamh Quinn, coyote expert at the University of California, said killing coyotes does not reduce their overall number, because it creates a vacuum that other coyotes move in to fill. Rather, she said, the aim is to eliminate problem coyotes, and hope that whatever coyotes move into an area next won’t be as aggressive."

A local humane group stated that "people can eliminate the reasons why coyotes are hanging around populated areas in the first place: open garbage cans, food that is left out or even intentional feeding. “We need to start ticketing people when they leave food out for wildlife. We need to fine people when they have a picnic and leave their trash out,” she told KPCC last May.

Nextdoor and Facebook posts seem to indicate the conflict with coyotes is getting worse, but officials are not keeping track. Los Angeles Animal Services GM Brenda Barnette removed Gregory Randall, the veteran Wildlife Officer from his position and, according to Randall, his many years of statistical analysis of sightings and attacks "disappeared." It is likely Barnette does not want records on this problem.

California Department of Fish and Wildlife only keeps track of when the agency is called in to kill aggressive animals. And Los Angeles County Department of Public Health has a database of the number of county residents who received rabies shots for coyote bites. But, anecdotally, public health experts say coyotes appear to be getting more aggressive, KPPC reported.

“The way they’re interacting with people is just not the way we used to see things occurring,” Karen Ehnert, the chief veterinarian for county public health, told KPCC in May 2016, "...before, it seemed like coyote attacks on people happened when a coyote was going after a pet, and the person intervened to try to save the pet."

"Now we have people being attacked, and there’s no pet around. There’s no food. There’s really no reason for the coyote to attack the human. So, it’s disturbing.” "Don't be afraid to fight back," she advised.

ARE WE KILLING COYOTES WITH KINDNESS?

Are coyotes emboldened because they are losing their fear of humans or because their numbers are making them more desperate for food? They have no natural predators in the city areas, and they have learned that humans (of which they used to be afraid) are merely passive opponents who wave their arms and make noise, but no harm comes from stealing their pets for dinner.

SOME CITIES FIGHTING BACK

This article evoked lively discussion because neighbors stated they are afraid to walk their dogs during the day on busy streets because of roaming coyotes.

It is common in communities like Beverlywood, though, to contract with a professional trapper. “I euthanize them,” states Mike Flick who runs a local trapping company. "After my own dog and several others were eaten in 2005, I refuse to let another Coyote walk away alive.

It’s hard to say no to killing when small, cute pets and children are at risk. Senior Emily Schoen said she saw one walking down Roxbury Drive while driving in the early evening.

All-City Trapping & Removal in Los Angeles warns, "Coyotes commonly have rabies, so it is very important to keep your distance when you come across a coyote."

COYOTE ATTACKS ON THE RISE -- this is not an endorsement but a reportedly effective fence for protecting a yard. A San Diego company also makes spiked vests for dogs -- with coyote whiskers on top to stop a grab-and-run.

In a very information article, "8 THINGS YOU MAY NOT KNOW ABOUT RABIES – BUT SHOULD," two experts share less-known facts about rabies in humans and animals and how to prevent it.

FOLLOWING IS JUST A SHORT EXCERPT:

Rabies is a virus that ultimately is fatal in humans but affects the central nervous system of just about any warm-blooded animals. Transmission occurs when saliva containing the rabies virus is introduced into an opening in the skin, usually via the bite of a rabid animal.

Transmission can also occur through infected saliva contacting mucous membranes (such as, touching your nose, mouth, eyes with saliva on your hand) or by infected saliva entering a scratch or other break in the skin.

POST-EXPOSURE PROPHYLAXIS (PEP) TREATMENT NOT AS BAD AS IT USED TO BE.

Rabies is always fatal in humans without PEP before symptoms start!

Note that the PEP regime no longer features the much-feared extensive treatment of vaccinations in the stomach but consists of a dose of human rabies immune globulin (based on weight) and a series of 4 vaccinations (5 vaccinations for immunocompromised individuals) in the deltoid area over a month period.

You can also prevent rabies by getting pre-exposure rabies vaccinations (3 doses of vaccine given in the deltoid area over the course of 3 to 4 weeks) if you work in an occupation with a high risk for exposure (ask your medical consultant.)

A study by the American Veterinary Medical Association, Rabies surveillance in the United States during 2017 indicated that showed the trend of rabid coyote attacks was already increasing.

Cats were the most frequently reported rabid domestic animal in the United States during 2017 and have been so since 1992. The percentage of tested cats found to be rabid in 2017 was the highest (1.3%) it has been since 2008.

During 2017, samples from 21 human patients in 14 states suspected to have rabies were submitted to the CDC for diagnostic testing, of which 2 (9.5%) were confirmed to be positive.

The first case involved a 65-year-old woman who died of rabies in Virginia after being bitten by a dog while traveling in India.

The second case involved a 56-year-old woman in Florida who died of rabies after being bitten by a bat.

(Note:  In January 2018 a six-year-boy died from rabies in Orlando, Fla. He did not receive PEP.)

For the fourth time since the United States declared freedom from the canine RVV (in 2007), a rabid dog was imported in 2017 from a country in which the canine RVV was endemic.

Mar 3, 2019 - One dog brought to Johnson County from Egypt was euthanized after testing positive for rabies, according to the Kansas Department of Health ...)

All 4 of these dogs were imported by animal rescue organizations; the 2 most recent importation events were due to proven (2015) or suspected (2017) falsification of rabies vaccination certificates.28

The 2017 case resulted in 2 human exposures, which necessitated PEP.2

LA CANNOT RISK RABIES IN PETS OF THE HOMELESS

Our growing population now includes the ubiquitous homeless humans and their pets which line our streets and do not adhere to many of our health/safety laws. Although a non-profit organization and LA Animal Services claim to be providing them with vaccinations and legal services, here is no way to force them to get shots, including rabies vaccine, and they often dump or "lose" their pets.

They have been either the victims or contributors to the recent typhus epidemic in downtown LA. And police detectives in the Central Division (downtown LA.) have tested positive for SalmonellaTyphi — the bacteria that causes typhoid fever, but LAPD declined to say if it was related to the conditions of the people and their pets living in the streets in the area.

Jonathan Fielding, former director the County Department of Public Health and now a professor at UCLA's Fielding School of Public Health, told the LAist on May 30, 2019, "Certainly when you have problems with hygiene — and that's a common problem with the homeless — you are at increased risk of a number of things."

One of these risks could be the spread of rabies, and, since coyotes are now migrating throughout the city and are definitely living in the Elysian Park area and other parks near downtown, is it just a matter of time until there is the perfect storm of a coyote contracting rabies and potentially spreading it to the large number of unvaccinated dogs (and cats) downtown.

Will Los Angeles admit this could become a problem and act by demanding that the homeless CANNOT own pets that are maintained on open public property without rabies vaccinations?

Or, will the response of Mayor Eric Garcetti and Council Paul Koretz be to join LAAS GM Brenda Barnette to merely continue to "educate the public by fostering a relationship of mutual respect between wildlife and the community so we can live together safely?"