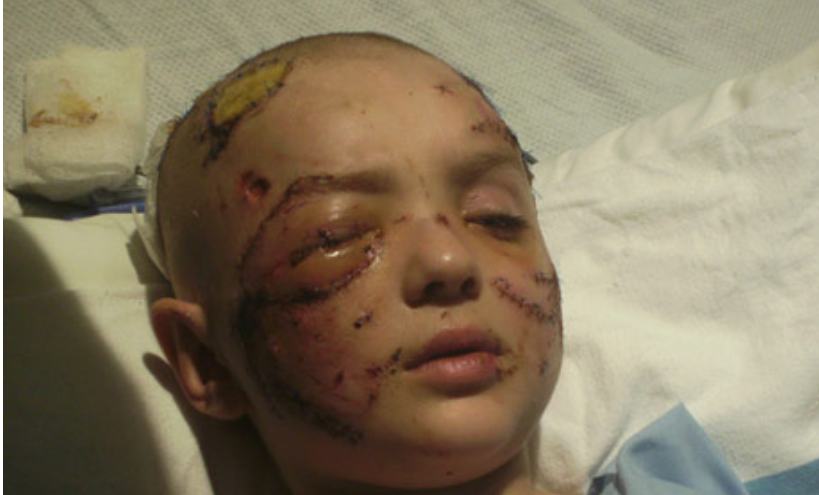 ANIMAL WATCH-Pit Bull attacks continue to ravage the lives of animal and human victims across the U.S. and Canada at an epidemic level, as officials directly responsible for public safety, including Los Angeles Animal Services' GM Brenda Barnette, manipulate policies and release unsafe animals to reach a nebulous goal set by Best Friends Animal Society to "save them all" and achieve "no kill."

Best Friends openly admits its political lobbying efforts to assure that no breed-specific legislation (BSL) interferes with or restricts Pit Bull ownership, and even those dogs confiscated during dog-fighting raids are adopted into homes.

Yet the growing group of victims who have been attacked by Pit Bull-types -- including American Pit Bull Terriers, Bull Terriers, AmStaffs and Staffordshire Terriers, et al -- have little voice or influence in most legislation.

Why isn't the safety of law-abiding humans and their pets equally, or more, important to politicians?

Why is one organization with a religious background, the Process Church of the Final Judgment, which is not obligated to the strict public-safety mandates of municipal animal sheltering, allowed to set a national goal of "saving" all Pit Bulls, regardless of their known transgressions?

RECENT ATTACKS IN U.S. AND CANADA

A Manitoba family is warning others after their son was attacked by a dog they had just adopted from a rescue group — an animal they later learned had a history of aggression.

Paul and Arlene McDonald said they first saw the dog, Griz, described as a "brindle-mastiff" in an online ad from the Homeless and Injured Animal Rescue of Canada. "He was described as, "submissive and very friendly, he is great with kids and dogs, not tested with cats." The dog was en route from the United States with another volunteer.

They paid the HIARC volunteer $400 and took Griz home without incident. The next morning, her 11-year-old son reached out to pet "Griz" goodbye and he growled and lunched forward, grabbing his neck and knocking him down the stairs." Records obtained later showed a history of aggression.

Chris Chodkowski was at Central Park with his wife Erica, their nine-month-old daughter, and pet labradoodle, on June 12, when a Pit Bull came up from behind. “We didn’t hear him barking; we didn’t know another dog was near us,” Erica Chodkowski told PIX11.

The dog jumped onto the bench and her husband put his arm out to shield their infant. That’s when the pit bull sank its teeth into the man’s forearm. “The dog really latched onto his arm,” she said. He lost consciousness twice due to blood loss and had to get 30 stitches. Erica frantically tried to help him and call 911 with the help of several caring bystanders.”

She told NBC that immediately after the attack, the Pit Bull’s owner grabbed his dog and said, “I don’t know why he did this” -- and then left. The Pit Bull is described as weighing 60-70 pounds, white with reddish spots. Neither the owner nor the dog has been found.

(Sadly, there is no way to gather accurate records on the number of pets or other animals injured or killed, because most are not reported.)

Merritt Clifton of Animals 24-7, who tracks statistics on Pit Bull-types and all other breeds of dogs, explains that:

From 1858, when the first U.S. animal shelter to do adoptions opened, to 1988, no re-homed dog is known to have killed anyone, earning shelters a reputation as the safest place for families to get a dog.

From 1988 to the Michael Vick dogfighting bust in April 2007, five shelter dogs killed people. Since then, at least 60 re-homed shelter dogs have participated in killing at least 35 people (and the toll may be much higher, since the source of dogs who kill people is not always known or disclosed.)

Among the killer dogs from shelters have been 44 pit bulls, four Presa Canarios or bullmastiffs, four Rottweilers, three English bulldogs (in just one pack attack), two German shepherds, two wolf hybrids, and one each of seven other breeds. (Research on these statistics is posted here.)

Click on locations to bring up information about the attack, including a link to the original source. Click “Show” to view attacks by month.

THE NATURE OF PIT BULL ATTACKS

Severe Pit Bull attacks are increasing at an alarming rate and the victim of this type of attack is likely to incur permanently debilitating injuries (both physically and emotionally) if they survive.

While all dogs can bite and all bites must be taken seriously, the common “grab-and-release” bite of most dogs will result in punctures and bruising, but not necessarily permanent or lethal injury. The dog's goal is usually is to get an intruder to leave.

The lack of warning by Pit Bull-types (fighting dogs do not growl or otherwise signal before attacking) and their speed and tenacity leave most victims unable to escape or protect themselves.

A Pit Bull does not have to be provoked to attack; however, it is responding to a perceived challenge. The problem is there is no way to determine what will constitute a "challenge" at any given time. The uniquely powerful neck and head structure of this historic bull-baiting/fighting dog is designed to allow it to bite, hold and grind its jaws and teeth, and/or rip and tear flesh, muscles and tendons while it shakes its victim violently. This results in an immense amount of tissue damage and blood loss, added to its bone-crushing strength. And it is intended to be fatal.

After the dog has stopped its opponent (the challenge), it may return quickly to a state of relaxation and friendliness and allow itself to be approached and removed by an animal control officer without incident and with its tail wagging -- or it may just be warming up for a kill.

THE NATURE OF PIT BULLS

The foregoing is why behavioral assessment is often totally unreliable in a shelter or other environment where the dog realizes it must please the individual testing it or where there may be nothing in that particular environment that is even remotely "challenging."

Pit Bulls are, by nature, masters of manipulation. It is a breed that was always kept chained during its early evolution because it would kill any other animal and sometimes humans. The only dogs that survived were the ones that adapted to the human who fed it. It learned that loyalty and obedience were rewarded. Those that did not learn this starved to death or were killed and did not reproduce their personal genetics or bloodline.

NOT ALL PIT BULLS ARE BAD DOGS

This does not mean there are not some very friendly and affectionate Pit Bulls which have never attacked, but the difference is in the genetics and bloodlines -- and opportunity -- none of which is instantly or absolutely determinable.

Any dog (of any breed) that shows aggression toward children, adults or animals should be humanely euthanized to avoid a tragedy for both the victim and the dog.

Best Friends is not secretive about its advocacy efforts for Pit Bulls. One click on Google brings up ALL of the following, including a paid ad:

The organization's goal is stated clearly:  "Animal advocacy is one of our priorities: end pit bull and other dog breed discrimination..."

And this invitation appears: "Take legislative action for animals by joining Best Friends ... to pass important animal welfare legislation and oppose ill-conceived legislation."  There is also a section teaching "advocacy."

WHO SPEAKS FOR VICTIMS?

A Google search for "Pit Bull Victims" brought up good information but NO INVITATION TO BECOME AN ADVOCATE:

ARE WE DOING ENOUGH TO WARN ADOPTERS/OWNERS OF PIT BULLS OF THE DANGER?

There are many individuals who write about their tragic experience on Pit Bull Attack Victims groups on Facebook and their stories are heartbreaking.

There is also some tremendously sophisticated and effective advocacy by small groups of individuals to stop the effort by Best Friends to prohibit or remove all Breed Specific Laws (BSL).

Some Facebook sites concentrate on banning the breed; some focus on supporting other victims; some post the latest attacks.

There are constant intelligent and compassionate conversations going on between victims in the groups, but the public and politicians do not hear their pain. Unfortunately, they rarely tell the raw details of the event that almost cost their life on public sites, where the unknowing reader could become enlightened. There are few comments by anyone identifying him/herself as a victim and directing readers to these groups. (Some of this is caused by their fear of being verbally attacked by Pit Bull activists.)

MADD AS AN EXAMPLE

Mothers Against Drunk Drivers (a 50l(c)3 organization), known as, MADD, was started by one woman whose daughter was killed by a drunk driver, but is well-known and provides a powerful influence nationwide.

Candy Lightner, the founder of MADD, uses the "kitchen table" approach in helping the families of victims of drunk-driver incidents, stating, "It’s more than a place to share food...after a tragedy, the table also serves as an all too painful reminder of those no longer seated around it."

"The table has grown, but we remain just as grassroots as we were in the beginning. Powered by hundreds of thousands of passionate advocates and supporters, MADD remains focused on one number – zero."

Dog-bite victim advocates also seek: No deaths. No injuries. And, no families impacted by dog attacks. It is necessary to start with the breed-type that causes the most serious harm and the most fatalities.

The public often innocently takes the advice of "experts" and shelter management in selecting a family pet; and statistics show that attacks by Pit Bulls (and other breeds to a much lesser degree) are occurring far too often.

The burden of advocacy for Pit Bull victims is falling on a few who willingly and very effectively work with very limited resources to protect a growing number of victims. There is a realistic fear of being assaulted and insulted verbally by Pit Bull activists who can be as vicious as their dogs.

CAN A PIT BULL ATTACK VICTIMS' LOBBY BE FORMED?

Is it time to unite victims, reach out for financial support through donations and/or grants, and -- following the model of MADD -- unabashedly bring the reality of Pit Bull attacks to the eyes, ears and hearts of the public, potential adopters, and current Pit Bull owners who may not be aware of signals their dog may/will attack? And, perhaps, more importantly could this coalition get the attention and interest of politicians who have the power to make changes that will protect thousands of people and countless pets?