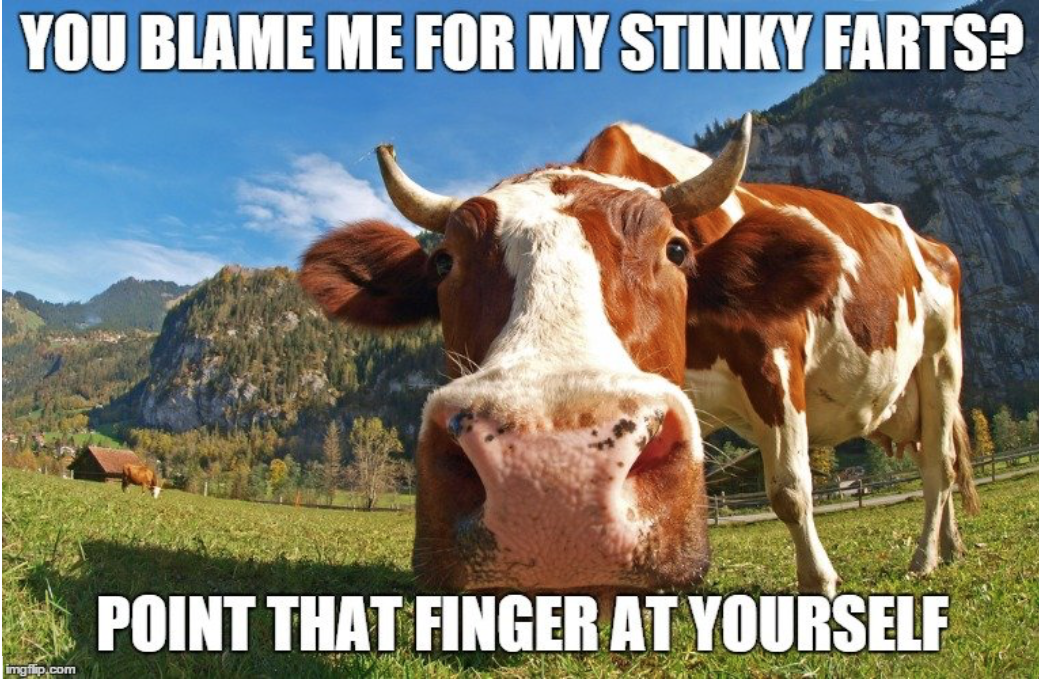 ANIMAL WATCH-Los Angeles Councilman Paul Koretz discussed cow farts on KFI radio earlier this week to justify his December 5 motion that, among other City venues, all movie theaters and major entertainment centers in the city of Los Angeles be required to have "at a minimum one vegan protein entree food option on their menus."

Koretz' circuitous rationale is that eating vegan protein offerings will reduce meat or meat-product consumption, result in a decline in cattle production and, thus, cow farts. This will, in turn, slow global warming which contributes to wildfires and destroy homes and communities.

The LA Fire Chief announced yesterday, also on KFI, that he is proposing controlled burns and better brush clearance.

Here are a few of Koretz arguments in his lengthy Motion (CF 11-1678-S3), seconded by Councilmembers David Ryu, Mitch O'Farrell and Mike Bonin:

"The popularity of vegan food is exploding worldwide for a variety of reasons including greenhouse gas emission reduction, animal welfare, and air and water quality issues associated with mdustriaS/agricultural [sic] meat production."

"Even the “lowest impact” beef, such as that from grass-fed cows, is still responsible for six times more greenhouse-gas emissions and 36 times more land use than raising legumes. According to the United Nations, a global shift toward vegan eating is necessary to combat the worst effects of climate change."

"Nearly 85 million travelers passed through LAX last year. Conservati vely, [sic] if 6% of people are vegan, then up to 5 million people passing through LAX are seeking high-quality plant-based food options."

Although he alluded to growing demand for plant-based snacks, Koretz provided no evidence or statistics that LA moviegoers will seek protein at a movie theater in a sufficient amount to have any impact on the global environment. He also failed to elucidate on the noxious effects of bullsh*t.

If we mandated the vegan option for the City Council, how much could we reduce global warming if LA?

Koretz hasn’t looked this foolish publicly since the 2014 L.A. Political Roast  when an LA Weekly article, Paul Koretz Dons Giant Lion Penis, But Can't Save His Own Political Roast, describes him on stage as part of a musical riff on Cats, wearing a lion suit backwards, with the tail positioned as an elongated portion of his anatomy, and later announcing, “For the record, I didn’t agree to this.”

A LEGAL PERSPECTIVE -- WHY THE NEED FOR A MANDATE?

Approaching this from a demurrer standpoint and assuming everything Koretz says is accurate--that the de minimis reduction in meat consumption which occurs while Angelenos are at movie theaters in the city will have such a dramatic impact--questions still remain: How many vegans eat meat in movie theaters now due to a lack of that option? And, how many meat eaters will decide to top off a night of entertainment with a vegan hot dog?

Just offering a vegan option does not guarantee it will sell in a quantity nor in a predictable amount to offset the lost revenue from spoilage and loss of space for more salable items. Does the profit margin allow for providing a separate preparation area guaranteed to have no contact with animal products and for carefully perusing every label to assure no product is misrepresented and a lawsuit follows?

People will eat what they want, and prices will undoubtedly have to be raised to cover the cost of maintaining this little-used option. However, if he area is heavily concentrated with vegans and there is sufficient demand, then the business should already be offering--and advertising--it.

As for making vegan options available at all City food-vending locations (airports, parks, employee tamale sales and the Homeboy Dinner in City Hall), the City doesn't mind wasting tax dollars, and covering costs is not a consideration when the option is potentially gaining favor within an expanding voter group.

A growing sector of the Los Angeles economy not included in the required vegan option are the soon-to-be permitted street vendors, who pull slabs of beef and pork and handfuls of chicken parts from black plastic bags or bins piled on the street, cooking and preparing it, without gloves or hair constraint, over varying types of open pits.

Flames, smoke and the odor of burning flesh billow into the faces of the eager, hungry clientele which crowds dangerously close (often blocking traffic) and waft through the surrounding community. They are frequently located near and in competition with existing restaurants but are prohibited from the protected high-revenue/political-donor districts; e.g., Staples Center, or the Los Angeles Coliseum.

These city mini-businesses so far lack the restrictions and benefits of public health/safety laws or inspection, as dripping grease permeates sidewalks and used paper plates are deposited in overflowing trash cans or discarded near sewers and storm drains.

These locations could truly benefit from Koretz concern over the environment and their customers deserve the same vegan options as businesses which have to comply with City and County regulations.

The penalty of failure to delineate exactly what constitutes a "vegan protein" operation, the suggested penalty for noncompliance, and who will enforce the new ordinance he is requesting are not mentioned by Koretz, who has publicly said when he banned pet shops and later fur sales that he doesn't mind putting owners out of business or people losing jobs if he believes it benefits animals. Barnette has supported all such efforts in LA, except curtailing breeders.

A LOOK AT THEATER PROFIT MARGINS

"The agreements between theaters and distributors can vary, Quora states, but usually the theater pays 55 percent of the gross ticket sales to studio distributor and keeps the other 45 percent [from which costs are deducted]. Theaters really make more money from concession sales than selling tickets."

"While concessions account for only about 20 percent of gross revenues, they represent some 40 percent of theaters' profits. Even with $10 tubs of popcorn, and profit margins on concessions of 85 percent, profit margins for a whole theater average around 4.3 percent for the industry," according to Ibis World. (Aug 4, 2014)
BTW, much of theater popcorn is vegan. Yes, that seductive buttery flavor may be vegan oil. BE VEGANTASTIC writes, "While the buttery topping at Cinemark and AMC Theatres are vegan, their salt is not.   Cinemark was the least interested in interacting with me, simply directing me to their Nutritional and Allergen Information Page."

Mayor Eric Garcetti has directed a major portion of his political career wooing Hollywood and the film industry to Los Angeles. Koretz has been happy to benefit from that. Why this sudden economic attack ONLY on local movie theaters, many of which are struggling economically.

According to the LA Times, "Movie attendance in the United States and Canada fell even more than expected in 2017, as the average ticket price hit a record high, according to new data from the National Assn. of Theatre Owners.  The number of tickets sold was down 6% from 2016...That's steeper than the 4% decline studio executives projected in December, and marks a 22-year low for the industry."

Is Koretz hiding behind veganism to punish Hollywood? Is this connected to major humane organizations' efforts to stop the use of animals in films? Then let's increase our efforts to do that and not put one more sector of the economy out of business or drive them out of LA.

The article reminds us that since the global-warming law in 2006 was enacted, "California has been reducing carbon emissions from cars, trucks, homes and factories."

California is the largest milk-producing state in the U.S., so more regulations are planned to reduce methane emissions from dairies and livestock operations to 40% below 2013 levels by 2030.

Due to the increased cost of new regulations, low milk prices, rising labor costs and drought, dairies are moving out of state, said Paul Sousa, director of environmental services for Western United Dairymen.

"The dairy industry could be forced to move production to states and countries with fewer regulations, leading to higher emissions globally," Sousa said.

ANOTHER SIDE OF THE METHANE STORY

Councilman Koretz may want to be careful what he mandates.

An October 25, 2017, Reducing the Environmental Impact of Cows', explains that researchers at the College of Food, Agricultural, and Environmental Sciences (CFAES) at Ohio State University are also studying how to cut methane gas produced by cows and reduce the phosphorus and nitrogen that end up in their manure — and potentially waterways.

"Reducing the methane gas cattle generate not only cuts greenhouse gas emissions but potentially allows more of the feed cattle consume to be directed to their body and production. That can lead to larger, stronger cows and steers, more milk and beef," Yu said, “Methane is bad because not only is it a greenhouse gas...between 4 and 12 percent of the feed cattle eat is wasted through the methane gas they produce."

So, if cows burp and fart less, “they may be able to grow faster, have more meat and produce more milk,” he said.

IT'S TIME FOR LEADERSHIP, NOT THREATS, IN LA

I am a lifelong vegetarian and highly support and commend anyone who decides to reduce his or her personal meat consumption even fractionally--for health or humane reasons.

However, we pay Los Angeles City officials to be "leaders” which implies "leading," not forcing or threatening law-abiding businesses. Adding vegan protein snacks at theaters that are packaged and have a reasonable shelf life is great--if the theater finds it profitable.

If the public wants vegan protein entrees, they will cause this to happen by frequenting those locations where they are available and by consistent requests to management of certain venues to make them available. If it is profitable, it will happen.

But City Hall politicians forcing an added economic burden on a struggling business will merely close its doors and reduce city revenue. In this case, it also risks creating animosity and antagonism toward those seriously concerned with stopping the suffering of animals, which we hope will become the goal of the nation, not just Los Angeles.

Growing our city business climate requires reason and incentives, not threats. Councilmember Paul Koretz is not the right person for the job!