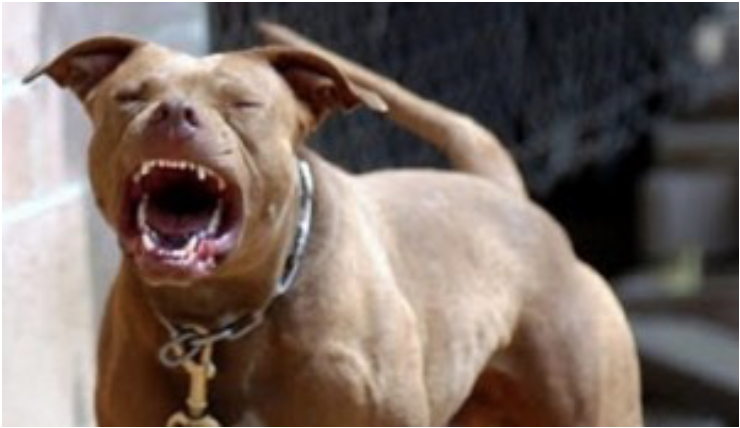 ANIMAL WATCH-A homeless man and his two small dogs were attacked on Wednesday afternoon, November 28, in downtown Los Angeles -- the heart of Mayor Eric Garcetti’s “city of angels” -- by a loose Pit Bull.

According to a local resident, the victim had picked up one of his dogs and was trying to shelter it in his arms when he fell, and both were savagely mauled.

The male Pit Bull, named “Beast," attacked the victim’s face and appeared to bite him in the eye, explained one witness who shared pictures and a short video. He added that the Pit Bull was one of two (the other is a female) which the owner, Brandon, said he got “free” at the LA [Animal Services] city shelter.

Sponsored 'free' giveaways are a prominent part of GM Brenda Barnette’s “No Kill” program, and she is currently promoting changing the LA Municipal Code to allow licensing dogs to homeless people without addresses.

Residents said both Pit Bulls live in a tent with the owner on Crocker Street in Skid Row and were allowed to roam and threaten people and pets. They said many complaints were made to L.A. Animal Services.

LAPD officers reported they received the call about the attack around 3:30 p.m. and responded to the gruesome scene at 5th and Crocker Street. LAPD mounted unit officers on horseback, who patrol the area, had responded initially and called for backup.

An officer shot and killed the Pit Bull because the animal was biting the victim on the face and hand and was dangerously out of control, according to eyewitnesses, who said they feared for their own safety.  Lt. Chris Ramirez described the attack as "vicious," according to KTLA-5.

A Skid Row resident called the incident "terrifying" and told reporters the Pit Bull had locked its mouth around the small dog's head after it bit the owner.

LAPD is investigating the shooting as a lethal use of force, Lt. Ramirez said, but witnesses said the officer saved the man and his dog and possibly others. Both victims were taken for medical (and veterinary) care and expected to recover, LAPD stated.

On January 17, 2018, Minister Veronica Hare, a Skid Row resident, appeared at the LA Police Commission meeting to plead for control of aggressive Pit Bulls in the downtown area, after she and her dog, Moses, were attacked.

"People come here to go to the Flower Mart and all of the different businesses down here. We are not going to take these dogs harassing and attacking anymore. We have to come up with something," she said.

Malcolm Stewart told KABC he mostly carries his dog around now. "You got to carry them. And that don't mean nothing if a pit bull attack you too, to get to him," he said.

At that time LA Animal Services said it encouraged reports of aggressive dogs and would "determine how to move forward on a dangerous animal investigation."

On May 17, 2017, ABC News reported three Pit Bulls attacked a man in his 50s while he was walking his dog at Stanford Avenue and 5th Street in downtown LA, two blocks from last week's attack. Graphic video taken by a bystander showed the dogs on top of the man biting him, after they killed his dog.

LAPD officers tried to get the Pit Bulls off the man, but finally had to shoot them to stop the attack and save his life.

On November 17, 2018, a loose Pit Bull entered the schoolyard of Fillmore Elementary School in Oklahoma City and attacked children playing during recess. Reports first said 15 children were involved in the attack but, later, emergency crews said 12 children suffered minor injuries from bites and were taken to local hospitals. Five were serious enough to be taken by emergency responders and others were transported by parents. Twenty-eight students and three teachers were on the playground.

Oklahoma City police released bodycam footage this week of the aftermath of the attack that started at the school playground and ended in a hallway where special-education teacher Lee Hughes tackled the dog as it entered the school building and held it down with a police officer assisting him.

Teachers rushed students into locked classrooms or outside, while Hughes laid on top of the brown and white Pit Bull until animal control officers arrived.

The dog is estimated to be about a year old by animal control.  This is young for a Pit Bull to begin attacks. Most dogs would enter a schoolyard to play with the children, not bite them.  Fighting-dog breeds learn by repetition and practice. As the dog becomes more focused, any future victims might not be as fortunate in escaping serious injury.

The dog was held by Oklahoma City Animal Welfare, according to KFOR, Officials believe it is owned because of its good physical condition and it probably lived nearby. It did not have a microchip or tags. No one has claimed the Pit Bull, possibly because the owner could face dangerous dog charges.

If this were a shooter or a person with a gun, would media outlets, parents and officials have treated it so lightly? Or would the demand for stricter gun controls have rung out across the U.S.?

ARE PIT BULLS A "LOADED GUN?"

If these tragic incidents had involved a shooter—rather than a Pit Bull—it would have evoked nationwide front-page media coverage and immediate outcry for more gun-ownership controls.

Why aren’t the same politicians who rant about the unfairness of gun violence to innocent victims also considering legislation that controls ownership of a dog with an ancestry of being bred and used for killing other animals. Since the Michael Vick dog fighting arrest, the Pit Bull lobby is insisting it is the ideal pet and "nanny dog," ignoring increasing reports of maiming and killing humans, including helpless infants.

Elected officials are paid to investigate facts--not accept hyperbole. Shooting kills and injures innocent people but so do Pit Bulls, at a rate too high to ignore.

Once they have engaged in an attack, it is likely that others will follow (dog fighters count on this) and they become more proficient in inflicting serious injuries and killing each time.

In a 2017 analysis and 13-year summary by DogsBite.org, which uses media reporting and tedious fact-checking, there were 49 canine fatalities in the U.S. in 2017. Thirty-two of these (or 82%) involved Pit Bulls or their 'close cousins.'

While making up only 6.5% of the total U.S. canine population, Pit Bulls were directly responsible for 29 (or 76%) of these deaths.

During the past 13 years, 433 Americans have been killed by dog attacks. Pit Bulls contributed directly to 284 of these deaths.

Pit Bulls are regulated in Military Housing areas (and over 900 U.S. cities), according to DogsBite.org, evidence that the federal government acknowledges keeping them as pets and/or in close proximity to other dogs and humans is too high a risk to take.

WHY DO PIT BULLS NEED A LOBBY?

Animals 24-7 delves deeply into Pit bull advocacy exposed by the CBC Fifth Estate (CBC), and discusses, "Pit Bulls Unleashed:  Should They  Be Banned?

The hour-long documentary,  produced by the investigative news magazine program The Fifth Estate,  the Canadian counterpart of the CBS news series 60 Minutes,  amounts to the first major mass media exposé ever of what host Mark Kelley sums up as “a multi-million-dollar lobbying effort to rebrand the pit bull as a family-friendly dog so that more will be adopted out.

"The focal question, asked repeatedly by Kelley of Best Friends Animal Society pit bull lobbyist Ledy van Kavage,  is “Why do pit bulls need  lobbying?  Why do they need an organization?  Why do they need a network fighting for them?” Cornered,  Van Kavage describes the ever-escalating numbers of fatal and disfiguring pit bull attacks as “fake news"... (read more)

OWNING A DOG IS A PRIVILEGE, NOT A RIGHT

Dogs are not a "protected class" thus, there is no deprivation or interference with 'rights' in singling out the breed to assure Pit Bulls receive attention/care and are not being used for illegal purposes or released to potentially cause harm. Not all Pit Bulls are aggressive, but even the most docile often have unprepared or unknowledgeable owners.

Because Pit Bulls are statistically the most euthanized breed in many states, there is a valid basis for limiting breeding and requiring spay/neuter of dogs to be kept in a jurisdiction, until the numbers decrease. Such a state law exists in California.

Insurance companies already make their own conclusions, based upon appearance and behavior records, as to whether a dog is a Pit Bull or other statistically aggressive breed and whether to insure them.

SPECIAL PERMITS AS PROTECTION, NOT PUNISHMENT

Here are just some random suggestions:

You cannot own and operate a car in the U.S. without a vehicle registration, insurance and a visible license plate. If you drive, you must study the vehicle manual and pass a test and get a license.

If you own a gun in CA, you must register it and adhere to numerous severe restrictions on its transport or use.

Since 76 percent of dog-bite fatalities nationally were attributed to Pit Bulls (or pit-bull type dogs) last year alone, isn’t it time governments started protecting people in regard to a lethal weapon living next door?

As with a gun not doing harm without a shooter, advocates say it is the owner, not the dog that is at fault for attacks and bites. Thus, it is time to assure that the owners of dogs that have demonstrated a higher rate of harm are held to a higher standard of responsibility for public, community and family safety.

A special-protection permit would not designate the dog as bad -- thus ending that dispute -- but require that the owner is knowledgeable about its care and conduct and provide safety for the public and other innocent victims, avoiding “unfortunate accidents.”

Why would there be a problem designating legal conditions under which a Pit Bull -- like a gun -- can be owned, used or allowed in public, with a severe legal consequence for violation?

This last week alone, demonstrated that owners are not capable of controlling Pit Bulls and shelters may be responsible for releasing dangerous dogs. The homeless, school children or beloved pets--should not become the helpless victims of abdication responsibility for Pit Bull ownership--neither should anyone else.