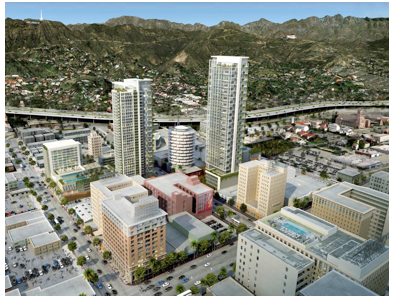 PLANNING POLITICS--To those of you who've not picked up a newspaper or checked out CityWatch these past six months, there's a quiet revolution going on.

As with the Democratic and GOP Establishments, we've got a "Downtown LA Establishment" that is happy to take apathetic and/or unempowered Angelenos and use their soft corruption to skirt those inconvenient things called "laws" or "city charter" or "general plans" or "bylaws".

And unless there's the mega-cash to afford big lawyers, we've got no choice other than to just "take it" or be relegated as being dismissed as NIMBY's, racists, regressives, or whatever pejorative terms the rich and empowered can throw at us.  I mean ... silly folks are we who want to adhere to the rules, right?  It's the "progressive" thing to do to move past these constraining and cruel laws, right?

1) There's an economy to restore, right?  Unless, of course, you recognize how companies and small business owners are leaving LA for other cities or even states where they can fiscally survive while attracting executives and employees who are self-respecting.  Oh, and did you hear how our pension crisis and related Downtown fiscal irresponsibilities have lost us $7.6 billion of equity.

I know, I know, I know ... that "math stuff" is soooooo boring.  Besides, the sun is still rising each day, right?  What could really go wrong?  So we should stop this "Chicken Little" stuff.

Because affordable housing is good, and parking is bad, so we should be nice to those benevolent developers who would neeeeeever skirt or use the law to hurt our City in order to make some extra big bucks, don't cha know?

3) There's a mobility crisis to restore, right?  Unless, of course, your recognize that the overdevelopment encouraged and enabled by City Hall and their politically-appointed Planning "leaders" makes transit inaccessible because "transit-oriented" projects are anything but, and are built for car owners, and will create one big and extended Downtown to thwart any logical traffic/mobility fixes.

And for those educated, hard-working, taxpaying Angelenos who say, "Wait a minute, here...", well, you're just a hateful, bigoted, regressive, mean-spirited, NIMBY jerk who must be overcome at any cost!  Can't you find it in your miniscule, cold-hearted, cruel hearts to let others in to the City of Los Angeles who are less fortunate than you?

So there you have it ... and for those of us who fight for a better economy, more affordable housing, and more mobility, we're either "useful idiots" if we go along with the Downtown LA Establishment who got us into this mess, or heartless monsters to be politically or financially destroyed if we go against L.A.'s own version of "Big Brother"--who clearly is smarter than the rest of us who analyze this, deal with this, and live this every day of our waking lives.

I certainly "get" those who fear that the Neighborhood Integrity Initiative might throw the baby out with the bath water, but for those who proclaim that those promoting it are evil and regressive and mean and bigoted, and ... (you get the picture) ...

... perhaps those doing the protesting doth protest too much.

Telling Downtown that its citizens, not the "1% types" who want to make lot$ and lot$ and lot$ of money at the expense of our Economy, Environment and Quality of Life isn't inappropriate--in fact, it's Democracy at its very finest!

Unless, of course, you consider the movements behind those fighting the Democratic Party and Republican Party Establishments are inappropriate.

Unless, of course, you conclude that things are getting better and better in the City of Los Angeles.

Unless, of course, you have a financial conflict of interest in seeing the City of Los Angeles obey its laws.

Until then, as a pro-growth, pro-affordable housing, pro-common sense Angeleno, I entirely support the Neighborhood Integrity Initiative, and agree with virtually every other true Planning and Transportation advocate that we're at such a horrific juncture that our backs are against the wall.

To be concerned that the Neighborhood Integrity Initiative is too much is understandable--and an aggressive and results-oriented effort should be passed NOW by City Hall leaders and developers who believe that such an initiative is no longer necessary.  Show everyone that the initiative is moot by enacting REAL change.

And for those of you who dismiss Angelenos and their Neighborhood Council/grassroots leaders, it's time to call you out as the cold and cruel tyrants who use propaganda to belittle and smash Angelenos in a manner to which George Orwell warned us many years ago.

Please support the Neighborhood Integrity Initiative, and respect the principle of government "Of the People, By the People, and For the People".

It's OUR City, and OUR Laws.  Asking everyone to abide by them is NOT unreasonable or unfair.

(Ken Alpern is a Westside Village Zone Director and Board member of the Mar Vista Community Council (MVCC), previously co-chaired its Planning and Outreach Committees, and currently is Co-Chair of its MVCC Transportation/Infrastructure Committee.  He is co-chair of the CD11Transportation Advisory Committee and chairs the nonprofit Transit Coalition, and can be reached at  [email protected].   He also co-chairs the grassroots Friends of the Green Line at www.fogl.us. The views expressed in this article are solely those of Mr. Alpern.)