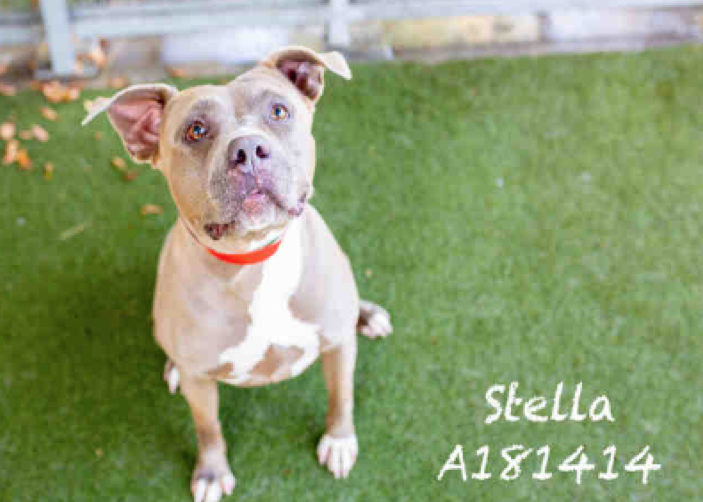 ANIMAL WATCH--Another brutal dog attack on an adopter by a Pit Bull from a Los Angles Animal Services shelter received no public expression of concern or sympathy by GM Brenda Barnette.

Nor did she express any alarm about a vicious multiple-dog fight that broke out during a "play group" and endangered the lives and safety of employees, one of whom had to jump on a table and over a fence to escape. Barnette's e-mail comment is contained below.

But, Brenda Barnette boasts profusely about her "life-saving" programs on social media and at Animal Services Commission meetings, and she is knowingly releasing dogs with bite histories to the public to appear to be a "No Kill" shelter.

This is done by a direct plea for adoptions or 'fostering' animals or by designating that dogs with the most egregious bite-records must be taken only by "rescues," which do not have the City's deep pockets, nor does the public necessarily hear about the past history of the dog---or its victims.

She seems to forget the lives of her employees and the public matter also.

Dogsbite.org reports that, "In 2019, 88% (29 of 33) of pit bull-inflicted fatalities had some form of a breed identification photograph, the highest percentage in our records, and that "Pit bulls and their mixes represent 74% of all images collected in 2019."

You can also read the actual media accounts of Pit Bull attacks in 2020 and previous years in the U.S. and Canada on the National Pit Bull Victims Awareness Database.

ATTACK, DOG FIGHT AND ANOTHER ATTACK AT LAAS

A recent violent Pit Bull attack by Stella, on a long-time Animal Care Technician at an LAAS shelter sent shockwaves through friends and colleagues who have taken for granted his valued and valid expertise in assessing and handling difficult animals. (Name and location are withheld for the employees' privacy.)

Here's some history on STELLA, according to LAAS records, leading up to that attack on the employee:

On 4/25/20 - STELLA, a grey and white Pit Bull (listed as "mixed-breed" by LAAS) was surrendered back to the shelter by a recent adopter for aggressive behavior (OBS). She was placed under quarantine because of the bite--which was an attack on an adopter--with a future available (for adoption) date of 5/05/20.

The Los Angeles County Public Health Department lists this attack as the 2nd reported bite by this 75-pound dog.

Here's the bite report by the victim's wife on 4/26/20 - BITE:  Jumped up at husband's face then bit both of his front arms.  He had to climb on the kitchen counter to get away...and that is when the dog bit both of his feet and punctured them through his shoes.  Puncture wounds on both arms and both feet.  Puncture wounds on forearms and punctured his feet through the shoes.  Husband was walking to the table, stepped backwards near dog, dog was startled and bit.

THE PUBLIC HEALTH DEPT. REPORT - The dog attacked, biting the victim’s arm and foot.  Dog will not let go of the foot.   VICTIM STILL AT HOSPITAL  5/26  0010  HOURS.  Adopted on 4/15/20.  Has displayed aggressive behavior since adoption.

GOING BACK - STELLA'S HISTORY AT THE SHELTER PRIOR TO ADOPTION

An 11/4/2019 Medical History note reads, she was "Injured." after she "attacked dog in play group; multiple dogs involved. This dog started the fight."  The injury was described as "limping, right rear leg, wounds to left ear, eyes red.  "Dog is still worked up, not able to handle safely at this time."

THE REAL DANGERS OF "PLAY GROUPS" FOR PIT BULLS

It appears there was a total of five dogs, involved in this incident, but staff lists three as in the fight:  (STELLA (PIT Bull), BRUNO (Pit Bull)  AND CHLOE (not Pit Bull, who was first attacked by STELLA)

ACT N. -  “While play group was in play, Stella attacked Chloe while Chloe was playing with Grace. While myself and ACT. C. were trying to break up the fight, more dogs started to join in.

Bruno then proceeded toward ACT J., who was in the yard helping break up the fight.  Bruno tried attacking J, getting ahold of the front of his leg.  ACT C. was able to get J. out of the yard and Bruno stayed at the gate barking and lunging, making it hard for us to go back into the yard to help get the dogs off of Chloe.

I ran and pulled a water hose because I remembered Bruno was scared of water and sprayed Bruno back so me and ACT J. were able to reenter the yard.  Once in, we were able to lock Bruno on the other side of the yard and eventually get the other dogs off of Chloe with the help of other staff members and supervision.

Bruno was a dog I would usually not bring into the yard but with much request from volunteers because of him being red listed and them wanting to save him, I did.  (Emph.  added.)

Yesterday there was no problem and the same dogs were in today minus a few who had not been called in yet.

(Author's note:  How many Pit Bulls can you put in a play group?)

ACT J.A. (Playgroup Runner) brought in a female dog for playgroup, witnessed the eruption of a major dogfight. {Author's note: These are called “scuffles” by former- AGM Melissa Webber and GM Brenda Barnette.)

The Animal Care Technicians insider (2 Male ACTS) began to intervene, attempting to break up the fight.  ACT C. used a rubber truncheon while ACT N. grasped a dog collar.  Being outside of the yard at the gate position, I saw the severity of the situation and entered the yard to assist.

As I entered, I watched ACT N. running from a grey and white Pit Bull.  With the dog close behind, Newman had to leap onto a table and over the yard fence to escape the animal‘s open attempt to get to him.  I, myself, went right after the aggressor dog’s rear legs [STELLA], attempting to unlatch her from its victim but was unsuccessful.  At this time I heard both N. and C. hollering for me to “Watch out for “Bruno,” (the dog that chased N. out of the yard.)  By this time Bruno was already walking straight for me.

In no time, this dog cornered me between the yard fence and a light pole and began lunging and snapping at my lower legs, at one point taking my trouser leg, which I managed to get away from.  I felt ACT C. attempting to pull me out of the yard, but I could not work my way out of the corner without coming closer to the dog.

When I was able to extricate myself from the trap, ACT C. pulled me out of the yard.  Now all three of us were safely out of the yard, but inside, the fight raged on.

At this point ACTS (SUPERVISOR) W, RVT K and ACT L. arrived on the scene to assist, so I found myself assisting Supervisor W. at still attempting to break up the fight, which eventually, was.

We had a very serious dog fight break out today in Playgroups.  Thankfully, no employee was seriously injured due to their quick thinking.  One of the dogs (Bruno) will be quarantined.

OTHER KENNEL NOTES ABOUT STELLA

"After the fight," a kennel note states, "Stella was impounded without incident. Once returned to the shelter, while pass other dogs, Stella wanted to fence fight. While kenneling, she tried to quickly turn around and snapped at the ground---possibly my foot --and continued to struggle to kennel.  Recommend seasoned employee to handle ONLY!!!!!!!! USE caution, unpredictable."

There was another warning given by Stella on 4/4/20, where the kennel note reads (BAD BEHAVIOR) "Took this dog out for DFL [Dog play group] and was able to go inside kennel and leash without incident, but upon returning to the kennel she resisted going in and then grabbed my pant leg down by my shoe and would not let go until she got outside of the kennel.  I then walked into the kennel again and threw treats to distract her in order to exit the kennel."

ANOTHER ATTACK BY STELLA ON A VETERAN EMPLOYEE

Bite report – 5/13/20  (Employee, right leg puncture.)  Employee was bitten when putting the dog back into the kennel.  Dog bit onto his pant leg when exiting kennel.  Would not let go, got loose and when employee tried to get the dog under control, the dog lunged and attacked his leg.

(Note:  Eyewitnesses at the shelter reported that the dog also bit at his hands and groin area. However, the bite is officially reported only as “puncture” to his leg.)

The dog was not euthanized, according to the Public Health Report.

BRENDA BARNETTE’S  RESPONSE -  ONLY ONE E-MAIL AFTER DOG FIGHT:

This was GM Brenda Barnette's only response to my CPRA on all of Stella's records:

"Unless I missed something, I don't see mention of barrier boards or other safety devices."

Apparently GM Barnette has never broken up a Pit Bull fight (you don't use barrier boards), and there was no indication of concern about her employees.

Was her comment merely a way to try to place blame on the employees for this horrendous and terrifying experience?

Dog attacks (and increasingly Pit Bull attacks) at L.A.--and other-- shelters have been considered important enough to capture headlines for years, but GM Brenda Barnette's attitude has been insultingly and irresponsibly dismissive.

The only recently reported incident where there was an e-mail exchange between her and her "life-saving" management staff about sending flowers after a shelter attack was for a volunteer, but this was dropped because there was no City account which would pay for them.

There have been  few mentions by Barnette of bites/attacks at the L.A. Animal Services Commission meetings--a group of Mayor Eric Garcetti appointees who also express only casual, if any, concern about the conditions in the shelters and attacks on employees and the public--but Barnette has quickly glossed over the most severe and ignores (or perhaps privately reports) any others.  (See:  LA Animal Services' Employee Mauled by Pit Bull ... Who Cares?)

HISTORY OF PUBLIC INTEREST AND SUPPORT FOR LAAS EMPLOYEES

Much criticized former-LAAS GM Ed Boks appeared at the City Council voluntarily and with urgency to report in detail the two attacks on shelter workers during his entire tenure, as well as giving detailed descriptions of injuries and care for these employees.

The Chief of both L.A. Fire Department and LAPD immediately express public concern about any incident resulting in injury to their employees. The Animal Control Officers and Animal Care Technicians at L.A. Animal Services also do very dangerous work. Are they considered dispensable?

The public that comes to shelters to "save a life" deserves to be able to count on their own and the safety of their children and pets after adopting (regardless of any disclaimer the shelter has them sign about being made aware of prior dangerous behavior).

Without the competence and dedication of L.A. Animal Services' employees in the shelter and in the field historically, none of the progress for animals would have been possible in this City.  They are the invisible heroes who deal with dangerous animals and dangerous people and are rarely recognized. They deserve far more credit and thanks then they receive and a reminder to General Manager Brenda Barnette:  Their lives matter!