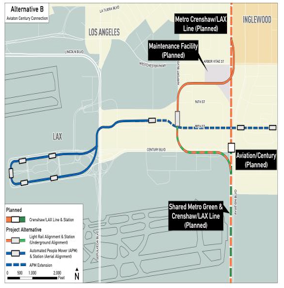 ALPERN AT LARGE-After delineating the history and opportunities behind the exciting LAX Connect proposal to link Metro Rail with LAX in my recent CityWatch articles, I figured a recap and summary was in order.  The LAX Connect option is the ultimate "betterment" for a Metro Crenshaw/LAX Light Rail Line that has so far fulfilled the first part of its namesake (Crenshaw) much better than the second part (LAX). The map below shows both the currently-proposed Crenshaw/LAX Light Rail Line (orange dotted line) and the LAX Connect proposal which veers slightly to the west (solid orange line) to allow it to link to the central airport terminals via an Automated People Mover running along 98th or 96th Street at a connecting Intermodal Transportation Facility (ITF).

Departing passengers could check on their bags at the ITF, then proceed to their desired terminal and through the TSA checkpoint en route to boarding their flights.  A Consolidated Rental Car Facility (CONRAC) at Century/Aviation is being planned that might have direct 405 freeway on/off-ramp access, as well as a bus terminal station that would allow both bus and car commuters with adjacent/People Mover access to the ITF. Arriving passengers would retrieve their luggage at the central airline terminals, and then have the options of being picked up outside the terminals (as they do now), being picked up at the ITF or a connected/remote Metro Rail station throughout the county, or renting a car at the CONRAC.

1) It has LA World Airports "on board" and as a willing partner with Metro to pay for the Automated People Mover to the tune of approximately $1 billion.

3) Although other options are being explored to have Metro Rail directly connect to the central airport terminals (see below), it will cost Metro up to $1-3 billion that it just does not have at this time, and won't have for years or even decades to come. 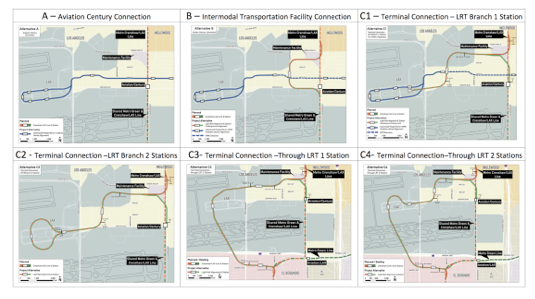 4) Operationally, Metro trains can only access the airport terminals with intervals ("headways") of 5-10 minutes at best, as compared to Automated People Mover trains that can access the airport terminals with headways of 2-5 minutes, so that the direct Metro train approach almost certainly will have a lower total number of daily passengers ("lower capacity") than the Automated People Mover approach.

5) The direct Metro train approach may operationally be insufficient to meet passenger and commuter needs, in that the ability to ensure 24-7 Automated People Mover service operated by LA World Airports is by far more likely than from Metro Rail, which does not have 24-hour operational service for any of its lines.

6) The choice of passenger and commuter options to be picked up or dropped off in the central parking lots, by the terminal drop-off points, at the ITF or remote Metro stations, and the CONRAC allows an enormous amount of options as well as a first-rate method to disperse airport-related traffic.

7) LA World Airports has a new land use plan (see below) that includes three potential MetroRail/LAX connections.  The underground option west of Sepulveda may not be allowed by the Federal Aviation Administration and does not disperse airport-related traffic, the Century/Aviation option is too far to the east, but the ITF is the "Goldilocks" option that is just right (to quote CD11 Councilmember Mike Bonin).

8) Significant unresolved concerns exist for linking the Century/Aviation station with the CONRAC and People Mover (still being planned by LAWA and the car rental companies, which are about 1-2 years behind Metro in their legal and planning efforts), so that any People Mover extension to the CONRAC at Century/Aviation is NOT finalized and ready.  Focusing on an ITF connection removes this problem.

9a) The Metro Rail/LAX link involves both north/south and east/west rail, car and bus transportation considerations--by placing the ITF between the central airport terminals (too far west) and Century/Aviation (too far east), the north/south non-airport-bound Crenshaw/LAX passengers are minimally affected.

9b) Furthermore, future Green Line extensions to the Westside and San Fernando Valley (such as up Lincoln and/or Sepulveda Blvds.) will avoid the scenario of a Century/Aviation station location that forces Westside and Valley commuters to swing to the east in order to double-back west on an Automated People Mover connection to the central airline terminals.

10) The comprehensive east-west Century Blvd. corridor Automated People Mover Line with an ITF connection virtually creates its own transit corridor, with the potential for enormous upside economic opportunities for local hotels, businesses and the creation of outlet mall or other retail venues to create a new business district and spruce up the economy of the city and county of Los Angeles.

It's not hard to come up with other reasons, but clearly the LAX Connect Plan is the "betterment" needed not only for the Crenshaw/LAX and Green Lines, but for the growing countywide Metro Rail system we are counting on to help bring Los Angeles into the 21st Century.

(Ken Alpern is a Westside Village Zone Director and Boardmember of the Mar Vista Community Council (MVCC), previously co-chaired its Planning and Outreach Committees, and currently is Co-Chair of its MVCC Transportation/Infrastructure Committee. He is co-chair of the CD11 Transportation Advisory Committee and chairs the nonprofit Transit Coalition, and can be reached at Alpern@MarVista.org This email address is being protected from spambots. You need JavaScript enabled to view it. . He also co-chairs the grassroots Friends of the Green Line at www.fogl.us . The views expressed in this article are solely those of Mr. Alpern.)