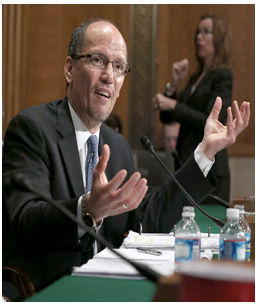 ALPERN AT LARGE - One of the main reasons I've always adhered to transportation issues is that its advocates are generally moderate and stick to the facts.  However, human nature being what it is, there are constant distractions from both the Left and the Right.  Our latest threat?  Newly-appointed Secretary of Labor Thomas Perez, who is holding billions of transit dollars hostage until some very unrealistic transit union demands are met.

For those geeks and news-junkies who pay attention to national politics, Thomas Perez was delayed for quite some time for confirmation in the Senate by those eeeeevil Republicans who were concerned that his politics were too far to the left, were too biased to liberal extremes, and too caught up with racial pot-stirring that was too divisive and unhelpful for our ideally-unified country.

But those eeeeevil Republicans, being the minority party in the Senate--and because only Republicans are considered to be "open season" targets for being racist and divisive in our current, politically-correct environment--caved in to the threat of losing their filibuster rights and allowed a party-line 54-46 vote to appoint Mr. Perez as new Labor Secretary.

That was less than a month ago.  Now new Labor Secretary Perez has held up billions of transit dollars to our state for its "temerity" in addressing pension reform--even changing pension contribution/benefit rules for as-of-yet unhired transit workers.  From BART to LA Metro, transit unions (kind of like our LADWP) have fought back against any fair or realistic reform, and really don't care what happens to taxpaying commuters.

Even the LA Times has supported past efforts, and called for future efforts, of Governor Brown and the state to oppose Secretary Perez's radical views--and actions that have already cost Metro $250 million, and risks losing $3.6 billion in federal grants--including funds for the Wilshire Subway and the Downtown Light Rail Connector.

Of course, the Times has an amazing short-term amnesia of Perez's aforementioned controversial nomination and approval by a partisan Senate, which was more obsessed with his Democratic, labor-biased and race-immersed politics than with his ability to display taxpayer-focused, labor-respectful, business-friendly skills.

Maybe the eeeeevil Republicans had a point on this one.

And contrast this party-line vote in the Senate with the 100-0, truly bipartisan and unanimous vote for newly-confirmed Anthony Foxx, a good (no, great) man beloved and respected by both parties, by both urban and rural citizens alike, and a heckuva good pickup for the Obama Administration.

(Certainly Foxx was a better acquisition for the Obama Presidential Administration than one former mayor of Los Angeles who got caught up with wining, dining and skirt-chasing over the needs of transportation, but I digress.)

I know there are some reading this who just loooooove to see the eeeeevil Republicans get slammed and knocked aside, and probably gave a few loud Tarzan yells when Perez was appointed, but perhaps the unpleasant, unhelpful and inappropriate results of partisan politics is best viewed negatively when BOTH sides do it.

So we've got our Governor Brown, hardly a right-winger, fighting Perez as well as a few judges who have inappropriately demanded our prisons be emptied--and to hell with the taxpayers, and to hell with public safety.  Brown and our own Mayor Garcetti (hardly a right-winger, either) are demanding pension and other public sector reform not out of ideology but out of a simple respect for math...which is entirely non-partisan.

I don't want to lose funding for our Subway or Downtown Connector (also a subway, by the way), and I don't think that the transit reforms being pursued at the city, county or state level are draconian or unfair.  Neither does the Times nor any other pro-labor entity.

And I don't want to let the Republicans, libertarians, conservatives or what have you off the hook, either.  Transportation--be it trains, freeways or bicycle lanes--deserve a first shot at all budgets, and the need to prioritize infrastructure and transportation is something that current Republican leaders all too frequently decry.

There are some very reasonable concerns that right-wingers have with respect to our transportation priorities (more on that in a moment), but if they had the guts to INCREASE our annual transportation budget while coming up with bold, cost-saving efficiencies in other portions of government that's clearly bloated, then a cost-neutral approach to government could be achieved.

And when good revenue-raising measures are needed, it's not anti-conservative to pursue them.  Measure R is still supported by most LA County residents, including Republicans.

But the moral of our story here is that if EITHER side--Democrats or Republicans are all screaming "NO!" to someone or some policy (by the way, this includes Health Care Reform, which most labor unions and businesses are now freaking out as they learn more about it), then perhaps the need to collectively cool our jets and come up with a compromise to please most, but not all, parties is the least likely approach to cause horrific blowback.

Because the Perfect really IS the Enemy of the Good.

And if Republicans want credibility for rail transportation, then they should focus on INCREASING funding for cost-effective Metrolink, Caltrain and Amtrak lines in the Sacramento/Bay Area, Central Valley and Southern California regions if they want to make points while trying to defund a High-Speed Rail project that keeps hitting more legal, funding and environmental roadblocks each week.

Secretary of Labor Perez clearly has no respect for legitimate transportation needs and legitimate labor reform.  There ARE battles to fight against employers who underpay and disrespect their employees in this country--and the middle class has seriously suffered as a result.

But the next time the entire Republican Party, or the entire Democratic Party, all scream, "NO!"...then maybe it's a good idea to listen to, and not dismiss or even demonize that group.

They may, after all, have something to teach you, and may prevent you from making a horrible mistake.

(Ken Alpern is a Westside Village Zone Director and Boardmember of the Mar Vista Community Council (MVCC), previously co-chaired its Planning and Outreach Committees, and currently is Co-Chair of its MVCC Transportation/Infrastructure Committee. He is co-chair of the CD11 Transportation Advisory Committee and chairs the nonprofit Transit Coalition, and can be reached at [email protected] This email address is being protected from spambots. You need JavaScript enabled to view it. He also co-chairs the grassroots Friends of the Green Line at www.fogl.us. The views expressed in this article are solely those of Mr. Alpern.)