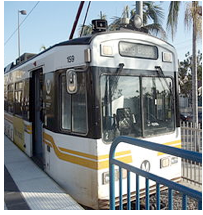 LEANING RIGHT - Most of the great cities of the world developed with access to rivers, oceans, and bays.  This allowed easier travel and communication with the rest of the world and cut down isolation. Other factors influencing development were weather and security but these are prominent in only a few of the world great cities.

The great cities of Europe share one other feature due to the era of their development and growth – they are compact. That is because they were developed before the advent of the car.

New York City is based on the great cities of Europe in that it is compact and surrounded by waterway access. It was influenced by European cities because it was developed by people with European background and exposure. It was also one of the first great American cities and therefore depended on easy access to European cities.

The development of public transportation for these cities therefore was most feasible underground because other right of way access either did not exist or was much too expensive to develop when their time came because the above the ground terrain was compact and saturated.

Los Angeles is an anomaly, unprecedented in human history, in that it is not adjacent to the waterway access of a great river, ocean, or bay. It developed 15 miles from the ocean because that’s where the fresh water was. One of your first clues is that there is even a street downtown named “Spring Street.” Development and growth of Los Angeles was not as directly influenced by European features.

A lot of wide open lands existed and compactness was not as much a factor as the development of European and eastern American cities. Los Angeles grew in an outward direction rather than upward. Growth of Los Angeles also paralleled the growth of the automobile. It grew to the ocean where there is waterway and a Mediterranean climate existed, to the valley where farming and a more leisure lifestyle was located, and to the deserts where adventure and solitude was found. The automobile also ‘fit like a glove’ and complimented this development.

This helps explain the fabulous freeway system that spans the Southland. The automobile and the freeway system provide one of the greatest transportation systems ever in the world. It resembles a spider web with its hub downtown and its tentacles reaching out to the ocean, the valley, and the desert.

The freeway system either provided the impetus for our home versus work locations or, in the case of older developed neighborhoods, the new system served them.

In developing the network of public transportation all the correct steps were taken in capitalizing on the success of the freeway system and using the same routes. The freeway provided right of way access, the challenging engineering obstacles had been overcome, and the train routes supported our life style patterns.

The developers got it right with the public transportation rail system that includes the Blue Line, the Red Line, the Purple Line,  the Green Line,  the Gold Line, the Exposition Line, and the Crenshaw Line.

The developers got it right except for their failure to connect with LAX thereby amplifying our access to the rest of the world.

They also dropped the ball in failing to provide public transportation that connects the coastal communities with each other and with downtown Los Angeles. After all isn’t the coast pretty much what Southern California is all about?

Whatever happened to the Polka Dot Line - the rail that runs along the 405 Freeway. It will connect the coastal communities and capitalize on the existing right of way access and on the existing engineering achievements.

It will interface with the Green, Blue, Crenshaw, Exposition, Purple, and Red Lines thereby providing connection to downtown Los Angeles in addition to connecting the coastal communities with each other. It will span San Fernando to Long Beach hitting the coast at Santa Monica/Brentwood.

Regardless of the reasons it is imperative that the needs of these communities also be served by the greatest city in the world. The Polka Dot Line should be developed.

Contact your representative and impress upon them the need for this new line.

Imagine the relief this will also provide to the occasional 405 Carmageddon Conditions.

He can be reached at [email protected])