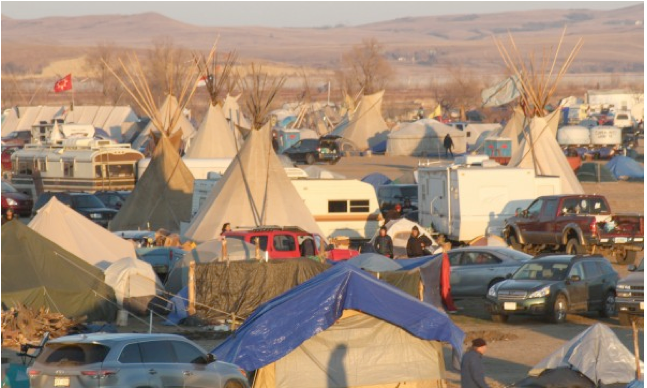 ON THE GROUND IN STANDING ROCK-Beyond the protests, police crackdowns, and pipeline drama, what’s it really like at Standing Rock, North Dakota? This October, I went to see for myself.

Like many other Native and non-Native visitors, I went to support the Standing Rock Sioux’s effort to keep the Dakota Access oil pipeline away from the Missouri River, which supplies water to an estimated 18 million people.

The tribe wasn’t meaningfully consulted before the pipeline slashed through its sacred lands. And even though pipelines are notoriously accident-prone, a full environmental impact study was never conducted.

Finally, on December 4, the Obama administration halted the construction of the pipeline and called for that assessment.

But in the preceding months, as the Sioux tried to protect their water, they faced surveillance, tear gas, arrests, water hoses, and attack dogs. Police were acting as the company’s protectors rather than the people’s.

Outrage and solidarity motivated my trip, but I also was eager to see the incredible multi-tribe community beside the river — Oceti Sakowin, the largest of the encampments created to sustain this difficult struggle.

After driving in from Bismarck, I stopped first at the security booth, a small shed overlooking the terrain filled with tents, tepees, RVs, trailers, repurposed school buses, and yurts. A young man directed me to the media tent atop “Facebook Hill,” the only place you could get decent phone reception — at least when law enforcement wasn’t scrambling the signal.

The media tent was a hive of activity powered by portable solar and wind generators. Someone checked my ID and issued a media pass, along with strict guidelines for respectful and secure photography and recording.

Along the main avenue to my campsite, I walked under hundreds of tribal flags waving in the breeze. Everywhere people were chatting, sorting clothes, bustling around the collective kitchens, and chopping wood. Children were roaming about, with adults or on their own.

Before I got far, a Peruvian woman named Claudia called me over to help her husk the mountain of corn somebody had just dropped off. As we chatted, she roped in new helpers with cheerful cajoling.

In the days I was there, I ran errands for the children’s school and kitchen, drove people to actions and from jail, helped build a wigwam, and assisted a disabled elder. I attended meetings, made friends, and got my hurt foot treated at the medic tent and my migraine at the herbalist tent. No money, no appointments — just a pervasive spirit of mutual aid.

It was the same story with food. Besides the main kitchen, with its large army-style tents, tribes set up other kitchens. Each had its own specialties and personality lent by the cooks, who created fabulous meals on wood stoves and campfires with whatever donations came in.

Many recommended “Grandma’s Kitchen,” where Grandma Diane, a Paiute from California, starts each meal by honoring the ancestors and always adds abundant servings of love. No need to call for volunteers, she said. Folks “jump up to help.” Hundreds of hungry folks came in for elk stew, quinoa casserole, cabbage salad, sweet potato fritters, and fried bread — a favorite at every kitchen.

Despite the risk, Diane moved her kitchen a mile north to the front-line camp set up across the path of the pipeline. A few days later, police destroyed it.

I worried about Diane, until I heard she was okay and still calling for supplies to keep cooking for the folks in the struggle, who were then hunkering down to resist the ferocious winter — and the even more ferocious repression.

I didn’t just find a protest camp at Standing Rock — I found a model community. As Natives there celebrate their recent victory, how can anyone not celebrate with them?

(Juliana Barnet is an activist and anthropologist who studies communities that arise out of social movements. Posted first at OtherWords.org.) Photo: Dark Sevier / Flickr