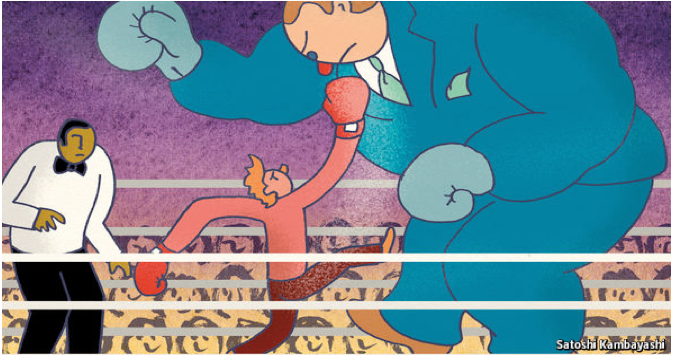 EASTSIDER-I am old enough to have grown up in and around labor unions and the union-management collective bargaining system, a system that today is largely broken, even as the 1/2 of 1% grow obscenely rich and the rest of us are beggared into a two class system. In fact, most people alive today have never experienced labor unions since manufacturing, American companies with roots in America, and the concept of full time employment of our citizens have all been supplanted by a new system of global financial manipulation masking as “Free Trade.”

I mention all this because there was a method for conflict resolution that came out of those days called “arbitration.” Born out of World War II and the War Labor Board, the idea was to establish a relatively efficient, bilateral system to quickly resolve disputes without the necessity of spending zillions of dollars and decades of time playing with lawyers and the court system. It was well understood then, as now, that the American civil court system is essentially run for the exclusive benefit of those who can afford to use it.

Anyhow, back in the day, arbitration presumed that there were two institutional parties -- labor and management -- who came to the table as relative equals interested in the resolution of their disputes. The idea was that they would agree upon a neutral third party, called an arbitrator, to hear their disputes, cogitate, and render timely, final and binding decisions as to the outcome.

Of course, this system, which worked quite well as an alternative to the courts, flourished in a time when America actually built things in the U.S., and where a significant part of the labor force was unionized and covered by collective bargaining agreements. It also assumed that employees could work for most of their careers for the same employer or industry.

Over time, the concept of lifetime employment relationships with employers was systematically destroyed and unions went into decline. Company CEOs were transformed into financial drones, managing debt rather than actually looking out for the long term health of the companies they ran. I can still recall President Bill Clinton proudly announcing that we should get over the idea of working for one employer, and begin to spend our lives constant retraining for whatever jobs the ‘new economy’ might require. Unmentioned was the implied destruction of pensions, employer-paid medical care, and most of the middle class. Welcome to the new “shared” or “gig” economy.

Arbitration continued, of course, but it was and is largely a niche market for those who still work in a collective bargaining environment -- employees in the public sector and what remains of private sector unions in areas like health care, education and a few other industries who are still the beneficiaries of this system.

But a funny thing happened on the way to the forum. As unions went into decline, those pesky personal injury attorneys started to replace the arbitration of collective bargaining with civil litigation in the court system. Given that there is no real check and balance governing the behavior of companies anymore, it is not surprising that they often engaged in behaviors which did not pass muster in court.

Actually, as a young hot dog union organizer, I used to just love nonunion companies. You could quietly organize a key group of employees, hook up with an attorney, and start filing a bunch of tort claims in court to make them realize a contract was a lot cheaper than a bunch of expensive lawsuits resulting in damage awards, not to mention attorney fees.

While companies hated those “shyster” plaintiff attorneys, even worse from their standpoint was the rise of class action firms who became rich in their own right, jet-setting around the country in search of raw group litigation meat. You know, like John Edwards used to do prior to his presidential dreams.

Ultimately, companies began to feel the economic sting of all of these lawsuits. As firms like Littler, Mendelson and Jackson Lewis managed to destroy the unions, they became the victims of their very success and were putting themselves out of business. The solution was to quickly reinvent themselves as ‘employment law’ specialists to union-free employers.

Of course, never underestimate the ability of a lawyer to turn rules on their head and make up look like down. Finally, the companies and their law firms hit upon a brilliant scheme: Bring back arbitration -- but in a rigged system that they could totally control. This brainstorm morphed into what we call today “mandatory arbitration” agreements.

Here’s how it works: Companies and their high-priced lawyers figured out a long time ago that their worst fear is someone finding a lawyer, going to court, and suing the bejesus out of them for unlawful acts. While the plaintiffs’ attorneys might get the bulk of any award, there was still enough left over for aggrieved citizens to find that lawyer and avail themselves of their constitutional rights. And in the case of class action lawsuits, there was enough money involved that, suddenly, millions of dollars could be at risk just waiting for a hungry attorney.

Just to give this new system the appearance of propriety, along came a whole class of retired or retiring judges eager to make the big bucks they believed that they were denied when working for the public. You know, in relatively low-paying jobs like superior court judges.

It worked like a charm. Agencies like JAMS & the American Arbitration Association were perfect vehicles to provide the appearance of authority and neutrality for such a system, and served as a shield between the corporate attorneys and the arbitrators themselves. Even better, the arbitrators loved the system, because they could charge hundreds of dollars an hour for their labors without fear of pushback. After all, the attorneys representing the companies were charging more than that, times the number of attorneys involved, so the arbitration fees looked reasonable. Everyone wins except the innocents sucked into the system.

Wow! This worked so well that if you read the fine print in almost any commercial transaction agreement, you will discover (usually too late) that you have given up your right to sue the rascals for any transgressions or misdeeds against you. Instead, you will be subject to a mandatory arbitration clause in lieu of being able to go to court.

If you listen to the people who cooked up these deals, they will proudly declare that this is a fast and efficient way of resolving disputes without clogging up the court system. Just like the tooth fairy is real.

What they won’t tell you is that the corporate attorneys control virtually all of the so-called arbitrators, and you the innocent consumer/employee can be on the hook for 1/2 of the thousands and thousands of dollars that the arbitrators will charge for your little case. In my humble opinion, we have successfully transformed the one dollar one vote of Citizens United into a unilaterally controlled private justice system by this technique.

If you’re not living under a rock, most of us watched or read about the recent grilling of Wells Fargo’s CEO John Stumpf regarding the millions of fake accounts they made their employees create under threat of termination. Well, buried in the testimony, there is a reference to mandatory arbitration by Mr. Stumpf himself:

“Brad Sherman asked if consumers who had forced arbitration clauses who wanted their day in court would get one. Stumpf tried to pass off the idea that having Wells pay for mediation was just as good but finally admitted, ‘no’.”

Another favorite Wall Street firm of the Great Recession, JP Morgan Chase, is also a great fan of mandatory arbitration. In an article called “Wall Street’s Protection Racket: Mandatory Arbitration,” Pam and Russ Martens point out the huge differences between mandatory arbitration and a court, where the public and the press can actually observe the proceedings, and even write about it.

In point of fact, this issue has become so pervasive that the New York Times recently described the process as “In Arbitration, a Privatization of the Justice System.”

The Times article describes a whole litany of horror stories, including how an ER doctor in Philadelphia brought a sex discrimination suit, was forced into private arbitration, had an ‘in the bag’ arbitrator, and is still paying off some $200,000 that the experience cost her even after she lost the case. The article is part two of a three part report - it’s a good read, and you can follow the links.

It does look like the government has started to figure out that mandatory arbitration clauses are popping up in almost every kind of contract between consumer and corporation. The Consumer Financial Protection Bureau is actually in the process of adopting a rule that will simply bar mandatory arbitration clauses in consumer financial products (read banksters). Chalk one up to Dodd-Frank.

Also, in a recent 7th Circuit Court of Appeals case  in Chicago, the court threw out an arbitration clause which banned employees from joining together as a class to fight their employer.

I mention this case because in many ways it draws my story full circle. In less than a century we have gone from meaningful labor management relations with honest and cost effective arbitration, to attempts to turn arbitration on its head and make unionization as well as group action illegal. Gee, where did that pesky idea of freedom of assembly and association come from? Oh yeah, the First Amendment of the Constitution of the United States.

Moral of the story: read the fine print, and don’t believe the spin doctors.