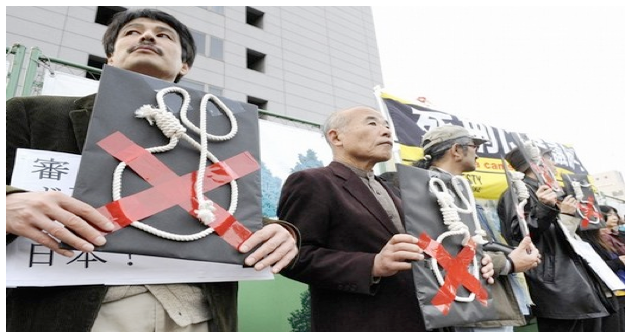 DEATH PENALTY EXPOSED-Speaking in favor of Proposition 66, the ballot initiative that seeks to speed up executions in California to Texas-like levels of lethality, Los Angeles deputy district attorney Michele Hanisee told legislators during testimony before the Public Safety Committee in May: “The suggestion that civilized societies don’t support the death penalty is inaccurate. Many countries such as Japan (photo above), Thailand, Taiwan, and Singapore have the death penalty.”

Ms. Hanisee is President of the Association of Los Angeles Deputy District Attorneys. She is being sued for lying in a declaration she made under oath during a murder prosecution and, just recently, her claims of “absolute immunity” for that egregious conduct were rejected by the Ninth Circuit Court of Appeals. While this alone clouds Hanisee’s credibility on the death penalty debate in California (whether the punishment should be ended forever or be “speeded up”), the countries whose justice systems Hanisee extols are even more troubling. Perhaps, in addition to remedial ethics courses on an attorney’s duty of candor to the court, Ms. Hanisee should also take a closer look at the countries she is suggesting Californians emulate with their vote on the death penalty this fall.

For example, in Japan, it has been documented that death sentences are “implemented with disregard for international law, including denying the right of prisoners to seek appeal.” The condemned are subject to “degrading and inhuman treatment” which includes “prolonged solitary confinement.” Japan even executed an 89-year-old man last year who spent 46 years on death row protesting his innocence – all the way to his long-awaited, abominable end.

In Thailand, Taiwan and Singapore, death sentences can be meted out for drug crimes alone. Furthermore, in Thailand, allegations of the torture of suspects charged with capital offenses have been substantiated by the Thai National Human Rights Commission. Taiwan, which is moving toward abolishing the death penalty, has a record of executing “psychologically or mentally impaired prisoners,” and failing to have “a clear and complete procedure for appeals for clemency.” Last fall, in an article for Slate called, “Singapore’s harsh death penalty: Inside the fight to save one man from the city-state’s death row,” Kirsten Han wrote about, “Singapore’s mandatory death penalty regime” where, under Singapore law, “anyone convicted of murder must be sentenced to death, with no chance for mitigating factors to be taken into account.”

(In Singapore, prisoners convicted of low-level property crimes can even be caned, a punishment Berkeley Law Professor Jerome H. Skolnick called “brutal,” describing how a “martial artist strikes the offenders” with “a half-inch rattan cane moistened to break the skin and inflict severe pain” often causing significant “loss of blood” and “shock.”)

Like Ms. Hanisee, Ms. Bethany Webb, who lost her sister in the 2011 mass shooting at a hair salon in Seal Beach, also got a chance to address the Public Safety Committee this past May. In her courageous testimony, Ms. Webb explained her support for Proposition 62 (which would, among other things, replace the death penalty in California with a sentence of life without the possibility of parole.) In voicing her opposition to the countervailing initiative, Proposition 66, Ms. Webb told lawmakers: “We could be more like Texas. We could start mass producing murder. Well, I’m sorry, California is better than Texas . . . We’re better than Texas.”

Ms. Webb is right. When it comes to respecting human rights, California is better than Texas, where the lust for speedy executions has led to the execution of a panoply of potentially innocent men. And, despite what Ms. Hanisee thinks, we are also better than Japan, Thailand, Taiwan, and Singapore. Or, at least, we will be – as soon as we vote for Proposition 62 and against Proposition 66 – ending capital punishment forever in California.

(Stephen Cooper is a former D.C. public defender who worked as an assistant federal public defender in Alabama between 2012 and 2015. He has contributed to numerous magazines and newspapers in the United States and overseas. He writes full-time and lives in Woodland Hills, California. This column was first published by JURIST and is being reprinted with the author’s permission. stevecooper7214@gmail.com) Prepped for CityWatch by Linda Abrams.