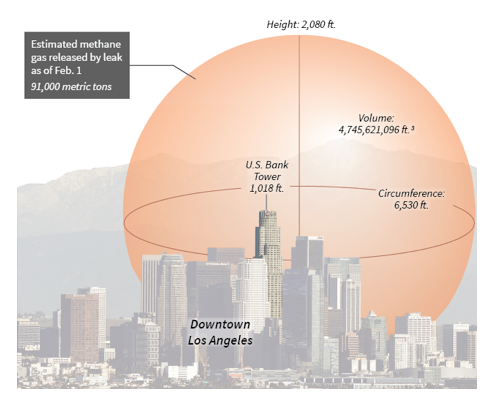 EDITOR’S PICK--The “invisible tsunami” of natural gas that has been spewing from a broken well in the backyard of an affluent Los Angeles suburb has caused illness and losses to businesses, and driven thousands from their homes. With their lives turned upside down for more than three months, residents continue to wait for the gas company to stop the leak once and for all.

The rotten-smelling air in and around the Porter Ranch community will begin to clear when the well is permanently sealed. And Southern California Gas Company, which operates the Aliso Canyon gas storage facility where the leak originated, says it expects to have the leak stopped this month. But the effect that the natural gas’s main component -- methane -- has had on the atmosphere doesn’t simply vanish when the well ceases operation.

The well has released more than 91,000 metric tons of methane gas into the air, according to Environmental Defense Fund, but the exact toll it has taken on the environment isn’t immediately clear. In part, that’s because the gas can only be seen with a special infrared camera, making this an invisible catastrophe in California -- there are no oil slicks in the clouds above Los Angeles, no wildlife covered in crude. But make no mistake: The volume of methane that has been ejected into the air is massive, and its effect on global warming is real. (Now, click here. We’ll help you visualize it.)