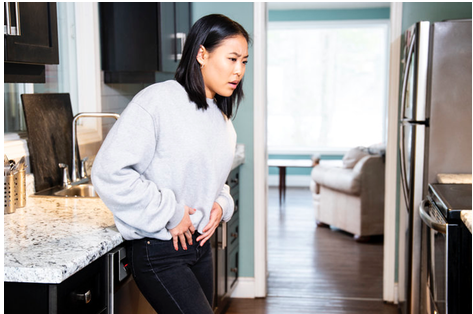 WELLNESS--For most people, stomach aches are a regular part of life. But beyond the acute, temporary discomfort that we’ve all experienced, there are also several forms of abdominal pain that can be a sign of a serious health issue and shouldn’t be ignored.

That said, it can be pretty tricky to figure out if your stomach pain is the type that will resolve on its own or if you need to see your doctor. Here’s the lowdown on six types of stomach pain you don’t want to brush aside:

Any chronic stomach discomfort ― that is, persistent or recurrent pain that lasts three months or longer ― warrants a visit to a doctor or nutritionist, said Liz McMahon, a Philadelphia-based registered dietitian. This sort of discomfort includes symptoms like ongoing diarrhea, constipation, pain after eating, feeling full after just a few bites of food, bloating and gas.

These conditions could be caused by anything from irritable bowel syndrome or lactose intolerance to something more severe like gastroparesis, a condition where the stomach doesn’t empty properly, she said.

“It’s important to see a GI doctor to rule out anything more serious like inflammatory bowel disease or celiac disease, as well as just to get a proper diagnosis,” McMahon said. “Once we know what the issue is, then the registered dietitian can provide the right diet recommendations.”

Stomach discomfort that comes along with nausea and vomiting can happen for a number of reasons, said Elena Ivanina, a gastroenterologist at Lenox Hill Hospital. This includes intestinal or bowel obstruction, gastrointestinal infection, inflammation, kidney stones, a ruptured ovarian cyst, an ulcer or even a heart attack.

“There are many other diagnoses to consider so it is important to speak with a physician if you have abdominal pain with nausea and vomiting,” Ivanina said.

Of course, some cases of nausea are due to overeating and food poisoning and usually pass within a day or two.

“Most people have suffered from the occasional stomach bug that lasts around 24 hours and know how that feels,” Ivanina said. But it’s time to see a doctor if the pain is unfamiliar, getting worse, isn’t going away, or is associated with symptoms like a fever or blood in the stool, she said.

“Any blood coming from the mouth or anus needs to be evaluated by a doctor,” said Samantha Nazareth, a New York City-based gastroenterologist.

Keep in mind that blood in the stool won’t always be red ― it can also be black and tar-like, which is often indicative of bleeding from somewhere higher up in the digestive tract, such as the stomach. Gastrointestinal bleeding can come from a number of sources including colitis, diverticulosis, hemorrhoids, a bleeding gastric ulcer and gastrointestinal cancers, Nazareth said.

But certain foods and medications can also cause tarry stools, so it’s important to think about what you’re taking and eating, said Niket Sonpal, adjunct assistant professor at Touro College of Osteopathic Medicine. These include foods like blueberries, beets, black licorice and more and medications like iron pills and bismuth medicines like Pepto-Bismol.

If you’re experiencing strong and severe stomach pain, something probably isn’t right. Specific and localized pain that involves “a sharp shooting sensation that may even take your breath away, cause you to double over or hold the area, and happens in waves,” could be from an obstruction such as gallstones or kidney stones, Sonpal said.

Appendicitis is also a consideration when you’re experiencing sharp pain, Nazareth said. Often this will be the type of pain that’s worsening, comes on suddenly or isn’t going away. Severe pain can also be due to an ulcer, pancreatitis or a bile duct blockage.

“The key is to really zero in on the kind of pain that is being felt because they are indicative of different things,” Sonpal said, adding that it’s important not to delay getting help when sharp pains are involved.

“Unexpected or unintentional weight loss is always concerning and must be evaluated by a doctor whether it accompanies stomach pain or any other symptom,” Ivanina said, adding that this could be a sign of a risk for cancer, chronic pancreatitis, Crohn’s disease or other illnesses.

If you’re experiencing stomach discomfort and also have a higher body temperature than usual, this could indicate the presence of an infection. In cases like this, you’ll want to see a doctor, Sonpal said.

Ultimately, you know your body better than anyone. If you think something is wrong ― even if you’re unsure that it’s serious ― it’s always best to check in with a physician. Don’t just stomach your stomach pain.

(Beth Krietsch writes for HuffPost … where this piece was first posted.)