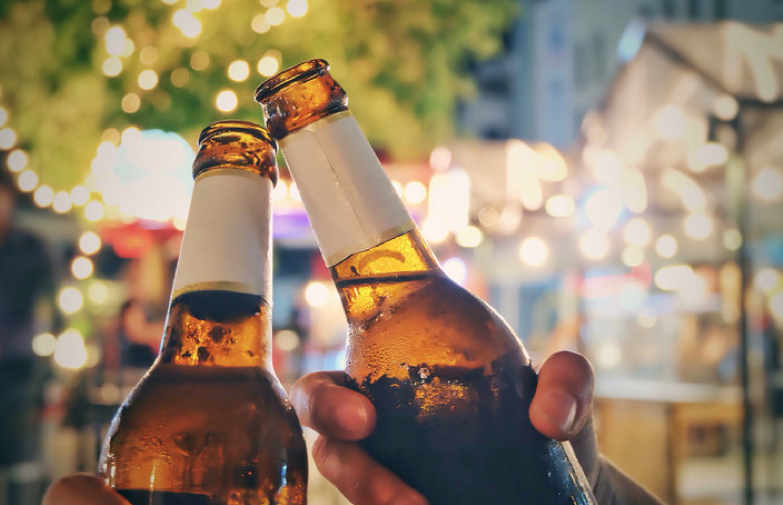 WELLNESS--It’s no surprise that enjoying several beers or gin and tonics a few times a week isn’t necessarily healthy.

But you may not be aware how much it ages you.

As you grow older, you start to metabolize alcohol at a slower rate, according to Elizabeth Trattner, a Miami-based acupuncture physician and nutritionist. The longer the booze stays in your system, the more alcohol builds up in your bloodstream, which puts you at greater risk for damaging effects.

For example, a study published in the Journal of Epidemiology & Community Health found that people who drank excessively were 33 percent more likely to have age-related gray rings around the corneas of their eyes. That condition, called arcus senilis, doesn’t typically occur until at least age 60.

Curious how else your bar nights might be affecting you? Below is a breakdown of just how alcohol takes a toll on your body and mind, making you look and feel older than you should ― plus some advice on how to cut back but still cut loose.

Alcohol can lead to wrinkles and broken blood vessels.

Just one night out drinking can dehydrate your skin to a point where wrinkles and fine lines become temporarily more noticeable, according to Carol Ann Goodman, a board-certified physician at Bella Vi Spa & Aesthetics in Indiana. It’s even worse for people who have naturally dry skin.

If heavy drinking is a regular thing, you could face some potentially irreversible skin damage.

“Alcohol also causes blood vessels at the skin’s surface to dilate,” Goodman said. “For intermittent drinkers, this causes temporary skin flushing. However, over time, the capillaries can dilate so much that they actually burst, creating visible red and purple veins, especially across the face and cheeks.”

While your skin can regain its supple and dewy complexion after several days of rehydration, broken blood vessels are a lot harder to fix.

“Once the changes of broken blood vessels have developed, those will not reverse on their own,” Goodman said. “Treatments such as laser therapy and some topical products can help to improve the appearance.”

Thankfully, it’s much easier to keep your skin hydrated in the first place. Kristin Koskinen, a registered dietitian nutritionistbased in Washington, recommends drinking at least one glass of water before you take your first sip of wine and then “alternating alcoholic beverages with non-alcoholic ones, including seltzer water, orange juice spritzers or even still water.”

Drinking water between alcoholic beverages “will combat ethanol-induced dehydration, which will help your skin to look better the next day,” Koskinen said.

It can also aggravate other skin conditions.

While those dark circles under your eyes, sometimes referred to as allergic shiners, can be caused by a lot of factors (including, obviously, allergies), your after-work wine isn’t helping. When alcohol dehydrates your body, it’s easier to see the blood vessels on that part of your face.

According to Trattner, the sugar in alcohol can also upset your microbiome ― that is, the bacteria and other microbes in your body. This disruption could make acne, rosacea and conditions like discoid eczema and psoriasisworse post-alcohol consumption.

It undermines your sleep, which is never good.

Alcohol stresses your body, which can manifest in a lot of different ways, including bloating, insomnia, other sleep problems and a lack of concentration the following day.

Despite how tired alcohol may initially make you feel — the National Sleep Foundation reportsthat 20 percent of people actually use booze to fall asleep — it can seriously disrupt your rest by reducing rapid eye movement (REM) sleep. The more you drink, the worse it will be.

“Alcohol may seem to be helping you to sleep, as it helps induce sleep, but overall it is more disruptive to sleep, particularly in the second half of the night,” Irshaad Ebrahim, medical director at The London Sleep Centre, told WebMD. “Alcohol also suppresses breathing and can precipitate sleep apnea.”

And a lack of Zs can make you look older. A clinical trial conducted by physicians at the University Hospitals Case Medical Center found that people with sleep deprivation showed more signs of aging in their skin, including fine lines, uneven pigmentation and reduced elasticity.

Drinking contributes to a host of age-related conditions.

When the liver is working hard to detoxify the body from alcohol, it creates more free radicals than the body’s antioxidants can handle, which leads to something called oxidative stress.Studies have shownthat oxidative stress is an important contributing factor in aging.

Although free radicals play their own role in protecting your health, when they’re not kept in balance by antioxidants, they begin to damage your fatty tissue, DNA and proteins. That damage can, in turn, contribute to diabetes, heart disease, neurodegenerative illnesses and other age-related conditions you want to avoid.

It can harm the overall quality of your life.

Another reason to limit your alcohol intake is that it’s one of the main culprits for those extra pounds you’ve mysteriously put on. Not only are boozy drinks often empty calories with little to no nutrients, but alcohol can cause people to eat more food.

Miami real estate agent Alina Freyre said she and her husband, Andy Freyre, stopped drinking two years ago. Alina promised Andy that if he got sober, so would she. Not only did they lose weight — 50 pounds for her and 80 pounds for him — but she said it was the “best thing that has ever happened” to them.

“We are different people inside and out, and we feel we are in a new relationship with each other and our kids,” Alina said. “I am huge on taking care of my skin and not only did drinking affect that, but it also affects how you care about how you present yourself. I feel 10 years younger.”

Joy Manning, a Philadelphia-based freelance writer and creator of the Instagram account Better Without Booze, can also attest to the life-changing effects of sobriety. She said she just celebrated her 600th day of not drinking.

Soon after giving up alcohol, Manning said her skin seemed softer and more glowing. She also lost 30 pounds and discovered that other healthy habits she had been chasing for years were finally sticking.

“I think that’s because drinking is a spiral,” she said. “Now I sleep well every night and work out vigorously, while before a couple of glasses of wine would make me want to eat pizza. Being alcohol-free really laid the foundation of a supportive lifestyle for being what I want my body to be.”

You can cut back on drinking.

A 2017 study published in JAMA Psychiatry found the number of adults in the United States who regularly consumed alcohol went from 65 percent in 2002 to 73 percent in 2013. Additionally, high-risk drinking — which is considered four or more drinks for women and five or more for men on a single occasion — went up 30 percent in the same time frame. So not only are more of us drinking, but we’re drinking more.

If you’re questioning your relationship with alcohol, Manning suggested that you first try to go 30 days without it and see how you feel. But that doesn’t mean you should also give up your social life. She said the worst thing you can do during this process is isolate yourself.

Instead, Manning encouraged people to go out with their friends, even if they’re all going to a bar. Socializing without a beer in your own hand will help to break the mental link between having fun and consuming alcohol.

“Try to find some fun, nonalcoholic beverages that taste good,” she said. “It helps to have something in your hand ― that goes a long way. The first time might feel weird but the more you do it, the less weird it is.” (Try one of these satisfying mocktails instead.)

The National Institute on Alcohol Abuse and Alcoholism also suggests keeping track of how much you’re drinking, which you can do on a piece of paper in your wallet or an app on your phone. Identify your triggers — what’s giving you the urge to drink — and find ways to avoid them.

The more you cut down on the booze, the more your body will thank you for it.

(Emily Blackwood writes for HuffPost  … where this perspective was first posted.)