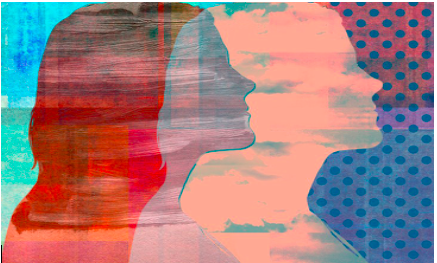 WELLNESS--In recent years, bipolar disorder has been discussed more openly. More public figures have been candid about their experience with the condition, including Demi Lovato, Mariah Carey, Russell Brand and Catherine Zeta-Jones. And the conversation around mental health only continues to grow.

Awareness is good, because the illness is not uncommon. The National Institute of Mental Health estimates 4.4% of adults will be affected by the condition at some point in their lives. It’s also one of the most misdiagnosed mental health conditions, meaning many people live with it without knowing.

Many people know that bipolar disorder is also called manic-depressive disorder, involving both high highs and low lows. But it’s not just a disorder that leads to fast mood swings or quick decision changes, as so many people often casually joke.

In fact, that characterization of the condition is pretty inaccurate.

Many people mistake bipolar disorder as being a quick and intense switch between emotions and subsequent behaviors. While the severity may be there, the change often happens slower than most realize.

“When people think of bipolar disorder, they often think of bipolar I,” said Sophie Lazarus, an assistant professor of psychiatry and behavioral health at Ohio State’s College of Medicine. “For a diagnosis of bipolar I, an individual must experience a manic episode.”

A manic episode is characterized by “a distinct period of abnormally and persistently elevated, expansive or irritable mood and abnormally and persistently increased activity or energy lasting at least one week and present most of the day, nearly every day,” Lazarus said. “The vast majority of individuals ― around 90% ― also experience a depressive episode in their lifetime, however it is not required for a diagnosis of bipolar I.”

In a manic episode, Lazarus said, the patient must exhibit three of the following: “Grandiosity of inflated self-esteem, reduced need for sleep, increased talkativeness, flight of ideas, being very easily distracted, increased activity or agitated movements and risk behaviors with potential for harmful consequences.”

Bipolar II’s hallmark symptom is depression. To be diagnosed, patients must have a major depressive episode and hypomania.

“Hypomanias are mood episodes similar to manias in that they involve disinhibition, euphoria and behaviors that are noticeably different from a person’s usual behaviors, but they do not cause the marked functional impairment seen in full manic episodes,” explained John Beyer, a psychiatrist at Duke University Medical Center’s department of psychiatry and behavioral sciences. Beyer added that depressive episodes “are 17 times more likely to occur, on average” than hypomanic episodes in bipolar II.

In a depressive episode, those with bipolar disorder report feeling “depressed” or “down,” and may experience “low energy, crying spells, lack of interest in life, or even thoughts of death,” according to Beyer. “While abnormal moods are more common for extended periods of time, rapid shifts in mood over brief periods of time may also occur.”

By comparison, mood swings are normal ups and downs relating to day-to-day life. Maybe you missed a deadline or got into a fight with your partner, and now you’re feeling upset. These lows don’t happen regularly, and it’s very rare if they occur without a reason. Mood swings also don’t last very long. Manic or depressive episodes typically last days or weeks and impair a person’s daily life ― think not being able to get out of bed or funneling excess energy into potentially bad habits like spending or partying.

Triggers for bipolar disorder episodes can range from stress to sleep, too much sensory input or travel that breaks someone from their typical routine. People usually begin experiencing the symptoms in young adulthood.

“The median age of onset for bipolar I and II ranges from 17 to 31, but the disorder can occur in teens and children,” Lazarus said. “Unlike depression, which is more common in women, bipolar disorder affects men and women equally.”

There are other differentiators for bipolar disorder, too, even though there’s overlap with other mental health conditions.

Beyer said about 40% of patients with bipolar disorder may at some point experience psychotic thoughts, like paranoia or hallucinations, during an episode.

There are many options available once a person receives a bipolar disorder diagnosis, but Lazarus said there are typically three elements involved.

First, medications are the “standard” in any course of treatment. “Mood stabilizers, anticonvulsants and atypical antipsychotics” are hugely beneficial for many patients, Lazarus explained. “In addition to controlling acute episodes, these drugs may also help prevent future episodes, or minimize their intensity and duration,” she said.

Recently, lifestyle factors have also been emphasized in treatment. “There is increasing recognition that psychological and lifestyle factors like sleep, stress and substance use affect the onset and course of the disorder,” Lazarus said.

“Psychosocial treatment” ― in other words, a combination of counseling and coordinated care by multiple doctors ― also helps patients manage the condition and adhere to a prescribed course of medication.

“The most widely studied and supported treatments for bipolar disorder are cognitive behavioral therapy, family-focused therapy, and interpersonal and social rhythm therapy,” Lazarus said. The latter is a process that focuses on getting good sleep, reducing stress and minimizing the effects of life disruptions on the disorder.

“We now better understand the causes of bipolar episodes, and how life stress can exacerbate the problems; because of this and treatment, people can learn to manage their disease.”

Lazarus also emphasized the need for patients to become more educated on the condition itself. “These treatments have strong research support, and have proven value for speeding recovery, reducing relapse, improving medication adherence, functioning and quality of life,” she said.

Sticking to treatment is an ongoing need for patients with bipolar disorder. “Ninety percent of people who have one episode will have at least one more episode, or multiple episodes, in their lifetime,” Beyer said. “Therefore, medications are prescribed with the understanding that they will most often require lifelong management.”

That said, with the right treatment, people living with bipolar disorder have a good outlook.

“The overall prognosis in bipolar disorder is good,” Beyer said. “We now better understand the causes of bipolar episodes, and how life stress can exacerbate the problems; because of this and treatment, people can learn to manage their disease.”

Bipolar disorder does not have to prevent a person from living a meaningful life. And it’s certainly not a punchline or a way to explain someone’s quick change of mind or mood.

(Jenna Birch writes for HuffPost … where this piece originated.)