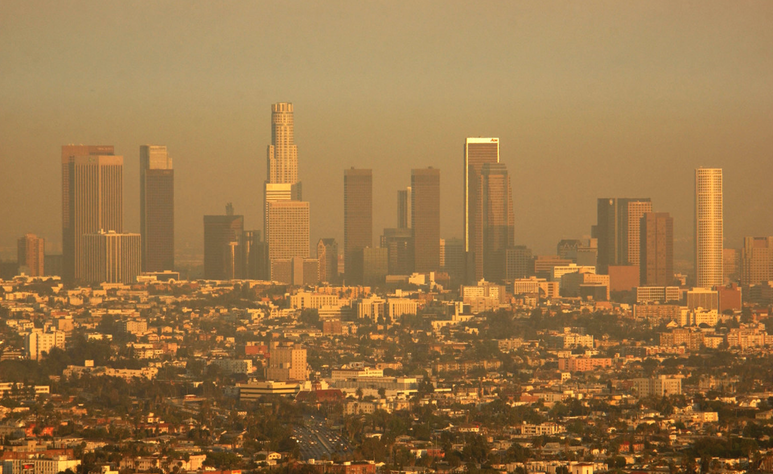 WELLNESS--Los Angeles used to have some of the worst air quality in not just the country, but the world. One smog event in 1943 was so thick and toxic that Californians worried it was a chemical attack.

By the 1980s, residents in the region were still dealing with well over 200 days of unhealthy air per year, per the Environmental Protection Agency's standards. The air is much cleaner today, after regulators cracked down on emissions from industrial plants and vehicles, and residents are much healthier for it: A new study finds that the rate of childhood asthma would have been nearly 20 percent higher had pollution levels not declined between 1993 and 2006.

Asthma is the number one chronic disease in children throughout the world; one in 12 American children have asthma, according to the Centers for Disease Control, and around one in 10 do in Los Angeles County. Researchers have known for some time that there is a strong relationship between exposure to air pollution and respiratory illnesses such as asthma. As far back as 1956, L.A. doctors were diagnosing patients with a suite of symptoms including irritated eyes, respiratory inflammation, chest pains, cough, nausea, and headache with the "smog complex." In the 1980s, autopsies of some 1,100 young Californians who died in accidents revealed that more than a quarter had severely damaged lungs. But it's harder to quantify the benefits of reducing pollution.

In the new paper, published Monday in Proceedings of the National Academy of Sciences, researchers at the University of Southern California used data from the Children’s Health Study, one of the largest and longest-running studies of the effects of air pollution on childhood development. The CHS began tracking children's health in the Los Angeles Basin in 1992, and since then researchers have found that, among other things, children living near busy roads or who play multiple outdoor sports have an increased risk of asthma. As air quality has improved over the last two decades, children's lung function has improved in tandem and the asthma incident rate has declined, which researchers linked with concurrent declines in nitrogen dioxide and particulate matter pollution—both common and harmful byproducts of burning fossil fuels.

Building on those previous findings, here the authors used a statistical tool called the G-computation algorithm, which allowed the team to estimate the causal relationship between asthma incidence and air pollution. The method allowed the researchers to estimate not just how much higher asthma rates would have been if air pollution had not been reduced, but how much lower the incident rate would be if emissions of nitrogen dioxide and particulate matter continue to decline. If nitrogen dioxide levels were 30 percent lower, for example, the asthma rate would have been more than 27 percent lower.

The effect sizes in this study are not necessarily generalizable beyond the Los Angeles communities where the data was collected, because the numbers are based on the actual pollution exposure levels that the communities experienced. But according to Erika Garcia, a researcher in the department of preventive medicine at USC's Keck School of Medicine, and lead author on the new study, it still "tells you the overall story that with cleaner air, you have less asthma incidence."

"There are public health benefits of reducing air pollution levels [even] lower than what they currently are," Garcia says. "And it's important to note that all the communities that were included in this analysis are well below the current U.S. [Environmental Protection Agency] standard for nitrogen dioxide."

The findings were published on the heels of an EPA report showing that the number of days with dangerously unhealthy air in the country's largest 35 cities is increasing.

"We've actually seen the air pollution concentrations for nitrogen dioxide tick up a little bit in the last few years," Garcia says. "Although there's been great, great improvements in air quality in Los Angeles in the last several decades, it's still, unfortunately, one of the highest polluted areas in the United States."

"We know that this can lead to both long term health impacts for the child. But it also has an impact on their families, and on society," she adds. Asthma can keep children from school, but it can also keep their parents from work when they have to stay home to care for their kids.

"We're all exposed to air pollution," says Garcia. "It's something that's ubiquitous in our environment, and it's important to identify these health risks that are associated with air pollution so that we can adequately take action to improve the public's health—particularly for something that's the number one chronic disease in children in this country."

(Kate Wheeling is a staff writer at Pacific Standard, where this report was first posted.)