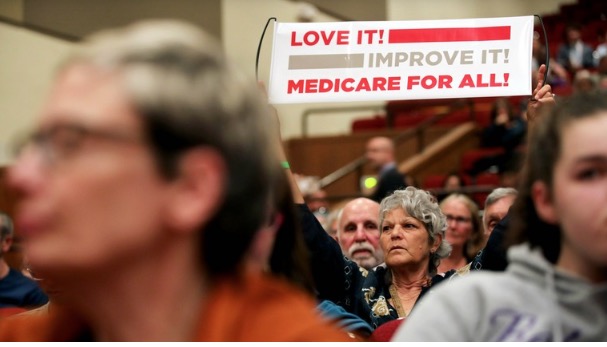 But a comprehensive new study shows we simply can’t afford not to adopt a universal healthcare system that will save California families and businesses over $100 billion per year.

After two years of careful study, a panel of healthcare experts, economists, and public health leaders appointed by Governor Gavin Newsom, the assembly speaker, and the senate pro tem has completed a comprehensive study on how to make California’s healthcare system work better for everyone. Known as the Healthy California Commission for All, they concluded that a "unified financing" system would not only save thousands of lives, it would save Californians up to half a trillion dollars over the first decade it was adopted.

"Unified Financing" is a term the commission used to describe what is also commonly called Medicare for All or single-payer healthcare. Whatever you call it, this is a reform that would cut out the enormous waste of the for-profit insurance bureaucracy, saving California's families and businesses fully $158 billion per year by 2031, with savings growing every year after that, while improving and expanding care. Let’s call $158 billion (in 2022 dollars) "the price of inaction" if the governor and legislature don’t act to make single payer happen.

A little history helps us to understand just how comprehensive this study became. Newsom ran for governor promising to implement single-payer healthcare. His campaign slogan—"Courage for a Change" amplified this promise—he was saying quite clearly that he wouldn't just talk about life-saving reforms like Medicare for All, he would have the courage to implement them.

Once in office he did act—but carefully. He appointed the commission to fully study all options going forward, including single payer. And study they did. Perhaps no major policy reform in California history has been more comprehensively studied—as we have waited nearly the entirety of Newsom's first term for the commission's conclusions.

For advocates of saving lives and saving hard-pressed California families thousands of dollars every year, the conclusions were worth waiting for. They find, definitively, that California can implement a "unified financing system" that covers all Californians, lowers costs, saves lives and allows everyone to keep their current doctor.

Of particular importance—and most certainly significant to the Governor—are the findings that this kind of quality and universal care will help close the significant gaps in health outcomes we see in California based on race and ethnicity, with Black and Brown Californians in particular suffering dramatically higher death rates from Covid-19 and many other diseases. Newsom has said more times than we can count that equity will be his "North Star," so the finding of his own hand-picked commission that "unified financing" will finally bring health equity to all Californians should be a particularly strong pull for Newsom to act on the Commission's conclusions.

The study is done. Now we will finally see if our political leaders display "courage for a change" and take the steps necessary to implement it.

Those steps include 1) assign staff to immediately engage with the Biden administration to set the terms of federal support for single payer in California; 2) secure legislative support for the new system of guaranteed healthcare; 3) enact foundational reforms for equity, affordability and coverage.

The door to quality, universal and affordable care is open. On the other side is a California where we save lives and save money by cutting out waste and bureaucracy and putting quality healthcare before private insurance company profits.

(Michael Lighty is president of Healthy California Now and a consultant with National Union of Healthcare Workers. He is a founding Fellow of the Sanders Institute, and worked for 25 years at California Nurses Association/NNU. This article was featured in Common Dreams.)