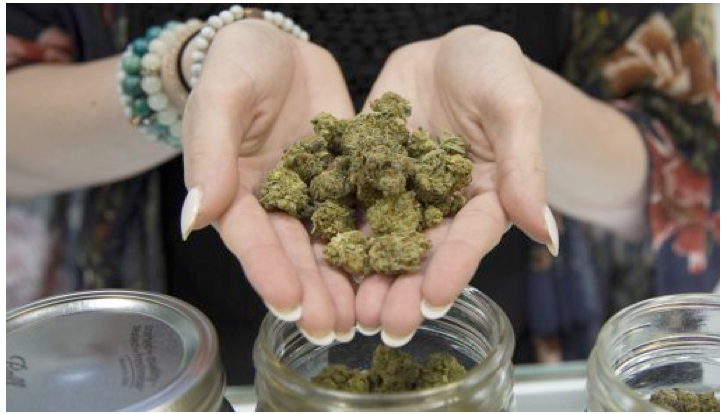 In California, where Proposition 64 passed with 56 percent of the electorate, voters had not only legalized marijuana but, in the words of the organization’s California State Director, Lynne Lyman, “eliminated nearly every marijuana violation on the books.”

As of midnight election night, everything from transporting to selling pot had been decriminalized, reducing not just future convictions but triggering retroactive sentencing reform.

“Over a million Californians will have the opportunity to have their record cleared reduced and expunged,” Lyman said. “We won this. And we won it in a big way.”

An undercurrent of worry, however, ran through the celebratory mood, owing to the ascension of Donald Trump in the presidential race and the Republican lock on both houses of Congress and soon, the U.S. Supreme Court. As recently as August, the U.S. Drug Enforcement Agency affirmed marijuana’s classification as a Schedule I drug, prohibited for all purposes, including medical need and most research. And no one knows for sure whether the self-described “law and order candidate” who becomes president in January will tolerate state-by-state legalization.

“I’m very worried about this,” said the DPA’s executive director, Ethan Nadelmann, noting that only a 2013 Justice Department memo stands between federal law enforcement and state marijuana markets. That document “really helped to provide a qualified light for states to proceed with implementation in the states that legalized,” Nadelmann continued. “I don’t think we’re going to have the same green light with the new administration.”

Even in states where marijuana has been legal several years running, the marijuana economy still occupies a shadowy place in the law enforcement landscape. Thanks to Treasury Department guidance issued in 2014, banks can legally handle money for businesses that truck in cannabis, but only if they collect intelligence on those businesses and file reports on their activities. (Many banks still don’t trust the law, and a credit union for marijuana sellers has been blocked by the Federal Reserve.) The National Labor Relations Board will intervene in labor disputes and protect organizing efforts within the marijuana industry, but only because an advice memorandum in 2013 declared such involvement was appropriate.

And while the Justice Department, in that 2013 “Cole Memo,” officially agreed to stand down in the face of robust state regulations that keep cannabis out of the hands of minors and prohibit stoned driving, like all the other advice and guidance from the federal government, such tolerance is by no means binding. If future Justice Department officials want to enforce federal law, they can start raiding cannabis shops on January 21, 2017.

Whether or not they will however, remains a subject of tortured speculation among legal experts, advocates and academics. “Donald Trump has been totally unpredictable on this issue,” Nadelmann said during the conference call. “There was a moment years ago when he said he wanted to legalize all drugs, but he was also heard using drug-war rhetoric in the debates with Hillary Clinton.”

Trump has also served up various word salads during his raucous campaign, statements that could be interpreted almost infinitely. “In Colorado,” Trump told Fox News host Bill O’Reilly last February, “the book isn’t written on it yet, but there is a lot of difficulty in terms of illness and what’s going on with the brain and the mind and what it’s doing. So, you know, it’s coming out probably over the next year or so. It’s going to come out.”

It’s also possible that Trump won’t be the one making the decisions. “What’s more important than what Trump says is who the new U.S. Attorney General is, and whether that person will abide by Obama enforcement priorities,” says Hilary Bricken, a cannabis law specialist at Harris Moure in Seattle. Trump’s initial short list did not augur well: New Jersey Governor Christie has promised strict enforcement of federal laws on marijuana; Rudy Giuliani oversaw a tenfold increase in marijuana arrests during his tenure as mayor of New York.

Now Christie seems to be out of the running, and Giuliani prefers a position as the nation’s chief diplomat. But if they’re indicators of where Trump’s headed on justice, “we could definitely see a rollback,” Bricken says. “If the Trump administration decides to revive the drug war, we could see increased enforcement in the states that have liberalization. We could start to see more raids and indictments from the DOJ.”

When that happens, industry momentum will likely stall out. “People will not take the risk. That could stymie all of our democratic experiments.”

Upending those experiments, however, would no doubt prove to be a recklessly unpopular move. “You now have more than half the states in the country that have some kind of marijuana legalization,” says Sam Kamin, a criminal justice professor at the University of Denver. “That’s a pretty big cadre of states where people have decided that marijuana is not something that should be treated as a criminal matter.”

There’s also the question of states’ rights, presumably a fundamental conservative tenet. “I’ve written that I don’t believe the federal government can enjoin the states from doing what they’re doing,” Kamin says. “It’s the basic principle of federalism. They can’t make them keep those laws on the books.”

Nor can the federal government force state law enforcement to go after people for exclusively federal crimes. “The Printz case says that with regard to gun laws,” Kamin says. In Printz v. U.S., the U.S. Supreme Court determined that states were not required to perform background checks on gun buyers on behalf of the federal government. “The federal government can enforce its own laws, but can’t force the states to enforce on its behalf.”

Where a new administration could cause trouble, however, is in the realm of regulation. “It could take the form of a lawsuit in federal court arguing that state regulatory rules are pre-empted by federal drug laws.” People worried about that happening after Colorado legalized marijuana in 2012, but it didn’t, Kamin says, “because it’s hard to see how that would serve federal goals.” If a substance is going to be freely available, it’s better to have it taxed and regulated.

Bricken says she and other lawyers with clients in the marijuana business are paying close attention to the trend in federal law, but they aren’t slowing down in anticipation of a new administration. “If the federal government goes around arresting attorneys, then we have a constitutional crisis on our hands. But for us, it’s business as usual until we get some dramatic turnaround.” And even in that event, she says, “I wouldn’t be afraid to take up the fight.”

(Judith Lewis Mernit writes for CapitalandMain.com … where this piece was first posted.) Prepped for CityWatch by Linda Abrams.