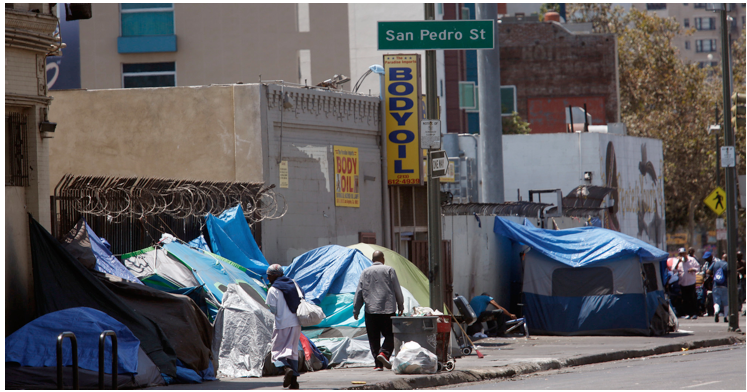 SKID ROW- “Bad math,” “bad leadership” and “bad direction” or “BBB” is how Angelenos should respond to Measure HHH.

“Bad math” because with Los Angeles Homeless Services Authority’s Homeless Count of almost 50,000 homeless individuals in LA County, why would voters generate 1.2 billion dollars to house only 10,000, leaving a whopping 40,000 all over our streets and still visibly present throughout our communities? Over a billion dollars to support a so-called solution that only accounts for one fifth of all the homeless, leaving four fifths stranded on the street? All this with no follow-up solutions in place? Wow.

“Bad leadership” because both our City and County leaders have failed to convince “We, the People” that this is the best option; instead they seem to be attempting to push HHH through quickly, a move that would buy them more time to figure out something else. The problem with that logic is, we the taxpayers would be giving them over a billion dollars for a “photo-op,” so they can pat themselves on the back and advance their political careers while the only happy beneficiaries of HHH would be the low-income housing developers and construction-related workers. “Look at all the jobs we created” (with your money) local politician will say if HHH passes, while 40,000 homeless men, women and children struggle to survive and countless others from all over the nation migrate here after learning that “LA’s got a billion dollars to spend on homelessness.” This will cause LA’s homeless numbers to further skyrocket!

“Bad direction” because no specific details have been publicly shared through a Citywide outreach process that would allow every “concerned citizen” to ask questions about exactly where their money is going. For a billion dollars, I’d have outreach Town Hall meetings all over town.

The lack of outreach and lack of inclusion (keep in mind that it’s less than 30 days to the November election) suggest a few things: With all government officials only pointing to their “Comprehensive Homeless Strategic Plans,” no new “partnerships” will be formed, thereby suggesting that only the same old “partners” will be invited to the party -- as in, the same old partners who let homelessness get this far out of hand in the first place. Common sense tells me that new solutions also need new partners if a different result is desired.

Homelessness in Los Angeles includes Skid Row, which is commonly known as “The Homeless Capital of America.” The Skid Row non-profits (there are a reported 107 in this 50-block community) have a combined annual budget in the hundreds of millions of dollars. That said, funding is not the problem. The decades old lack of oversight, transparency and accountability is what allowed Skid Row to get out of hand.

A “look the other way” strategy has greatly benefited the higher-ups at all the non-profits connected to homelessness in Los Angeles. Led by the politically created “Skid Row Containment Zone Policy” (established in the mid-1970s,) this current and long-existing culture dictated by the non-profits, supported and/or “allowed” by the politicians (and ultimately controlled on the streets by the Los Angeles Police Department) is the very problematic infrastructure that has failed every chronically homeless person (including homeless vets, the mentally ill and victims of rape and domestic violence.) At the same time, these are the exact same entities who are already lined up, licking their chops like savage wolves, at more than a billion dollars in brand new funding, fueling their hearts’ desires under the guise of housing a few homeless people.

It’s not even guaranteed that 10,000 homeless folks will be housed. Other estimates have suggested a much lower number, only 7,000 low-income units to be built…and for a billion dollars?

As a formerly homeless person still residing in Skid Row, and a volunteer homeless community activist for the last 10 years, I am deeply troubled by the lack of “realistic openness” coming out of City Hall regarding Measure HHH.

For instance, where is the additional funding to house the remaining tens of thousands of homeless individuals and families left on the streets after HHH going to come from? What is the “Plan B” if HHH fails to pass? These and many more questions need to be publicly answered before the vote is cast in less than 30 days. And for those of us who understand the slow pace of City Hall, we can easily predict that the answers that all Angelenos need (and should not stop seeking) will not appear magically prior to November 8.

Please think before you vote! The future of our great City and the future of homelessness people depend on you!

(General Jeff is a homelessness activist and leader in Downtown Los Angeles. Jeff’s views are his own.) Edited for CityWatch by Linda Abrams.