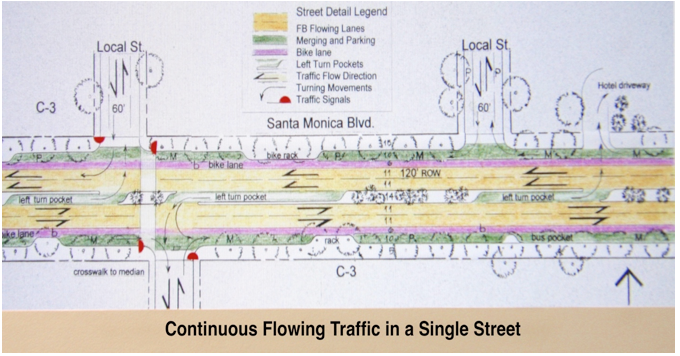 TRANSPORTATION BREAKTHROUGHS-With all the technological improvements coming along with vehicles it is fitting that an advanced roadway architecture should be developed as well. This is so they work together and make even greater transportation service and efficiencies regarding congestion elimination and GHG reduction.

These improvements would be very affordable and integral with what exits today and would continue the desirable characteristics of travel that we want into the future while bringing about efficiency to the overall roadway network.

In addition to capacity related problem solving, the continuous flowing traffic can be managed to provide safer speeds for drivers, bikers and considerations for pedestrians as well while making the significant reductions in GHG emissions. These are extra benefits beyond giving shorter travel times at low speeds related to the environs that are being traveled through.

The improved structuring of how communities work can give urban design “place making” opportunities as well. The innovative roadway architecture that allows continuous flowing traffic is a dramatic improvement by essentially doubling the capacity of normal street lanes that presently have stop and go driving. The LA Automatic Traffic Surveillance and Control (ATSAC) system gives the necessary signal timing and brings integration with other related existing 4400 controlled areas of the street network. What would be taking place is the “digitization of roadways’ in selected portions of the vehicular network with the new roadway architecture facilitating “continuous flowing traffic” (CFT).

Bus transit would be truly rapid with CFT and coordinated with communications to minimize first and last mile connections from origin to destination. The continuous flowing traffic boulevards would attract ridership and bring greater frequency and dependability of bus service.

An example of improvement with CFT would be the elimination of the 5 mph traffic congestion on Santa Monica Boulevard in West Hollywood. That utter traffic failure every work day, can be eliminated by an increase in capacity. Todays failing 5 mph peak period stop and go speed has a capacity of around 300 vehicles/lane/hour and is emitting GHGs at about 2.5 times the amount as when there is flowing traffic at 30 mph. A managed speed of 30 mph (not allowing slower or faster traffic), gives CFT capacity at about 1200 vehicles/lane/hour, four times as much than the 5 mph failing traffic.

What that means is a shorter peak period with uncongested flowing traffic and a much freer spacing of vehicles one to another which would be safer and have less stress on drivers. This is the result of designed and managed free flowing traffic.

As a larger case example, the I-405 bottleneck in West LA can be eliminated as well with selected roadways having continuous flowing traffic to add capacity to the I-405 corridor.

Metro suggested a solution that a tunnel under the I-405 freeway going from south of the interchange with the I-10 freeway, then north on past the West LA area while still in a tunnel and into the San Fernando Valley (likely beyond the I-101 interchange as well). Thankfully it is not a solution and such a boondoggle can easily be avoided.

The tunnel proposal comes from a view that does not recognize the travel demand which brings about the 405 bottleneck. The problem is not the amount of traffic that is exchanging between the San Fernando Valley and south of the I-10 (approximately just 8% of the Westside 405 corridor traffic). The problem is the massive amount of traffic that is exchanging with all the areas beyond the Westside, going to and from the Westside, within that short distance between Sunset to Pico Boulevards.

The I-405 corridor and its related cross streets going under it from Sunset to Pico Boulevards, essentially comprise a daily traffic volume of around 680,000 trips per day. It’s a problem that a tunnel for vehicles, or a single line of rail transit however configured, cannot address. The congestion is inherently a vehicular problem.

There are three major functions where the 405 is insufficient; 1/ backed up traffic on the 405 because the Interchange with the I-10 has been out grown, 2/ there is a lack of signal and ramping capacity to deal with the intensity of distribution and collection of commuters to the Westside which backs up traffic on the 405 and related crossing boulevards coming and going, and 3/ with the 405 failing, commuters then cut through the arterial grid such as between the Valley and the City of Santa Monica by going through Brentwood instead of using the freeways as intended. Cut-through traffic is excessive throughout the Westside because of that breakdown where the major corridors do not contain the travel demand due to inadequate capacity.

The clear evidence of that is the backed up commuter traffic, some half mile or more for hours, on all the crossing roads with which the commuters are waiting to get on the 405. A plan using a frontage road with continuous flowing traffic along with minor improvements to the 405 and 1-10, can provide good access by solving these three deficiencies.

The Santa Monica Boulevard corridor would be an included improvement for adding capacity and would have a connection to an improved 405 corridor. The result of the CFT frontage road, and related minor freeway improvements would be in effect the adding of 120,000 person trips per day capacity to the corridor. That would contain the traffic to the corridor and eliminate backed up traffic and the intrusive cut-through traffic into adjacent communities.

From a community viewpoint, future planning for the LA Basin must protect the character preserving and livable community standards by having limitations on development to keep the relationship of travel demand to land use in balance with available transportation infrastructure. This is also reasonable given the need for developing a mix of urbanizing land uses elsewhere in the County.

Limiting future growth in the congested LA Basin then would direct the majority of future job and community enhancing growth to the suburbs which they need. This secures suburban urbanizing as well as the reduction of VMT by making shorter trip length on average because jobs, shopping, institutions and services are closer to the housing in those communities. Suburbs and cities would use CFT corridors to structure growth and maintain good land use to infrastructure relationships.

With the 90 million miles currently made by vehicles each day in LA County, reducing average trip length from 15.5 miles in length to 12 miles would be a 22% reduction in VMT and GHG emissions. That is a significant approach to meeting the transportation share of GHG reduction to reach SB 32 goals and for providing good mobility.

Structuring better planning with an extensive and efficient improved roadway system makes sense, whereas the supposed increase in rail transit implied by Proposition M brings about greater concentration of development in the LA Basin. The proposed rail is directed to the LA Basin which already resists over development. And the ‘coup de grace’ is that light rail can’t be put into existing boulevards without creating greater congestion and GHG emissions. Metro’s plan would not work!

Vote NO on Proposition M so that affordable and good “bottom-up” planning can be incorporated into overall County plans to secure livable communities, towns and cities.

(Phil Brown AIA, has invented the CFT roadway system improvement by research and development that has occurred over the last twelve years analyzing the Westside traffic problems and the socio-economic needs of Greater Los Angeles. Contact is available through the website FlowBoulevardPlan.com) Prepped for CityWatch by Linda Abrams.