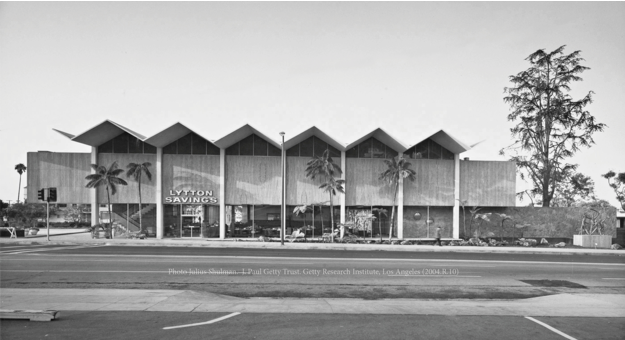 DEEGAN ON LA-Is it a tactic that will pay off or a “Hail Mary” to breathe a last breath of life into a dire situation? Whichever it turns out to be, it’s smart and that’s what anti-development activists have been showing lately: their smarts. No longer willing to automatically accept developers’ plans for incursions into their neighborhoods, or rely on threats of litigation or lawsuits, activists are “weaponizing” social media to mobilize their communities.

They are using the city’s own protection schemes, such as applying for Historic-Cultural Monument status to preserve individual buildings like the 1960’s Lytton Savings building that may have historic-cultural significance.

This unique, holistically planned building, incorporating landscaping and artworks into its design, is described by the Los Angeles Conservancy as “a 1960 Modern bank building distinguished by its zigzag folded plate roof,” that is now serving as a Chase bank branch. This building is in the line of fire between development and preservation.

On one side is the developer of mega-development 8150 Sunset featuring buildings by Frank Gehry. On the other side is an activist community group called Friends of Lytton Savings.

The problem is that the Lytton Savings building sits within the footprint of Frank Gehry’s vision -- a project that some like. He wants to create a Phoenix from the ashes of the fabled Garden of Allah Hotel, a former Hollywood celebrity hangout. Many say his new structures, rising high above the surrounding skyline, will stick a finger in the eye of flatlanders looking up at the Hollywood Hills at dusk, ruining the visual treat created by twinkling house lights on a magical hillscape. It will equally impact owners of those hillside homes who look down and across the great basin starting at the sea and spreading eastward.

From either perspective, a treasured view will be blocked, dominated by Gehry’s collection of sculptured mixed-use buildings. This will create a mass that stops the eye where there was once a clear field of vision -- a million dollar view worth paying for. Cultists who cannot get enough of Frank Gehry, may end up with lots to celebrate at the intersection of Sunset and Crescent Heights. Others think his buildings stick up in the air, looking like giant exclamation points – a reminder of what can and has gone wrong with city planning. Still others might say, “hey, great architect, but wrong location.”

Anyone visiting Grand Avenue can see how Gehry’s monumental Disney Hall integrates contextually into the architecture of adjacent icons like the Broad Museum, MOCA, the Colburn School, the Mark Taper Forum, the Dorothy Chandler Pavilion, the Ahmanson Theater, and the DWP building. The result of Disney Hall’s placement is very appropriate and satisfying. It all fits into the neighborhood.

However, placing Gehry’s towering new complex of buildings in the middle of a residential neighborhood, without escape or relief, and out of context to the Sunset Strip music and club culture that is integral to this neighborhood’s character, may create a very different experience. Any “novelty” will soon wear off. Arguing that the homeowners will have a “piece of art” to look at right outside their windows requires a homeowner to buy into the developer’s claim and that the new view trumps the old unobstructed view that was once worth paying for. Many fear this project will be only be the beginning of a wall of tall buildings, running east-west along Sunset. This would create a mass of concrete and steel blocking all views from and to the hills, transforming canyon living into a ghetto experience.

Here’s a list of some important voices joining the conversation about what to do with the Lytton Savings building:

The Office of Historic Resources http://preservation.lacity.org/commission

Frank Gehry is now part of the “ying and the yang” of these neighborhood concerns. There is resistance to his towers on Sunset as well as concern about the preservation of what could become a historic-cultural landmark. Will the Lytton building be scheduled for razing as part of his towers plan? He may get his buildings, but would he, could he, help preserve a potential landmark?

Historic preservation of the Lytton Savings building has become an issue impacted by Gehry’s proposed project at 8150 Sunset. He could become a loud and strong voice with the developers and the community for its preservation. He could work to integrate it into his building program there and use his voice to support one of two alternatives already proposed in the Environmental Impact Report.

Gehry could weigh in and say, “let’s keep this possibly cultural heritage monument in our plans, and implement one of the two defined alternatives to work around it.” That would be a mitigation unlike any other developer usually makes. Usually, developers offer something like traffic improvements to mitigate their building programs. If Gehry takes the side of preservation in this case, it would be the opposite of the usual stand taken by the architect-developer-politico class that has been tearing through the city, constructing projects in a cycle of “here today-gone tomorrow,” “bigger and better” buildings.

The Friends of Lytton Savings have used an avenue of appeal that is open to communities trying to protect themselves from unwanted development at the expense of tearing down historically significant structures. They have filed an application with the City’s five-member Cultural Heritage Commission for consideration of Historic-Cultural Monument status.

On Thursday, August 4, 2016, the Cultural Heritage Commission unanimously voted to consider the former Lytton Savings building for Historic-Cultural Monument status. Commissioner Milofsky, in the lead up to the vote, succinctly said, “I think this goes into the realm of a no brainer.”

This process and hopeful award of HCM status, will at least delay groundbreaking of the Gehry project. If, at their next commission meeting on September 15, the commissioners vote to support the application, that recommendation will go to City Council’s Planning and Land Use committee (PLUM) for a vote, followed by a vote by the full City Council. Then, it becomes politics.

Politically, and his voice is vital in any development project in his district, Councilmember David Ryu (CD4) is taking a wait and see approach to the findings of the HCM commissioners. His spokesperson told CityWatch, “Councilmember Ryu supports the Cultural Heritage Commission’s decision to consider the significance of this property. Their expertise is necessary to determine the cultural and historic status of the Lytton Savings property.”

What you need to know and what you can do.

Send email expressing your support of HCM status to these people:

As long as there is a viable option to preserve the Lytton Savings building within the overall development -- options that are proposed in Alternatives 5 or 6 of the DEIR – the preservation project may become a story of listening and accommodation, led by one of the world’s great architects who is willing to consider the alternatives and take steps to preserve a piece of the city’s cultural heritage. He could have a great impact on the neighborhood with his new buildings if he supports the preservation of the Lytton Savings building.