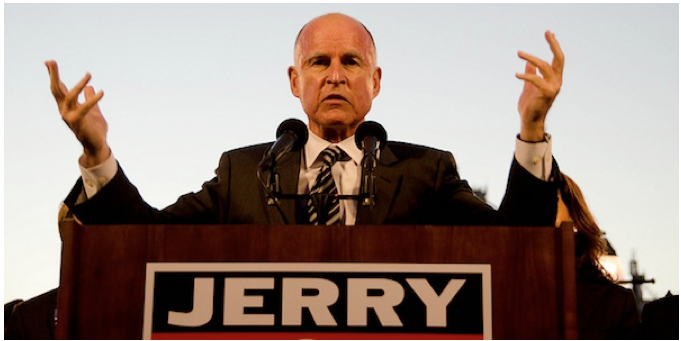 DEEGAN ON CALIFORNIA-These are big shoes to fill: a man who knew that water was California’s new gold rush and who helped create the California State Water Project in order to quench the thirst of a growing California population and power up the state’s role as America’s biggest farm. He also oversaw the building-out of the freeway system for mass transit and was a leader who expanded the university level public education system, enabling Californians to grow and develop the native brainpower of Golden Staters.

Any one of these high impact achievements which have benefited tens of millions of Californians since he was governor of the state (from 1959 to 1967,) could be considered Edmund “Pat” Brown’s legacy. Together, all of these accomplishments are more than enough to warrant calling his administration a “Golden Age” in the Golden State.

But what about his son? What does Jerry Brown -- whose 16 years in office make him the longest serving Governor in California history (1975 to 1983, and 2010 to 2018) -- have to show for himself as he gets ready to term-out in eighteen months? What will be his legacy? He will probably not be remembered as an environmentalist, one of the nobler callings in this time of global warming and environmental crises. In fact, he seems to be turning “anti-environmentalist.”

Jerry Brown has been watering down and de-powering CEQA, the state law that has a foundation in the federal environmental clean water and clean air laws enacted in the 1960’s. The California Environmental Quality Act (CEQA) is “a statute that requires state and local agencies to identify the significant environmental impacts of their actions and to avoid or mitigate those impacts, if feasible.”

The former Catholic seminarian, trained in politics at his father's knee, had to make a choice: would he serve the church or state? The prospective “Father Jerry” instead became “Governor Moonbeam” who hung out in Rock ‘n Roll breeding ground Laurel Canyon with Linda Ronstadt when she was at the top of the charts; he was ferried around town in a decrepit blue Plymouth by a CHP driver, telling us all the time how “small is beautiful.” Fun stuff to remember, but not a legacy.

Back then he seemed ashamed to wield power. According to some anecdotes, he was embarrassed as a kid when his dad, as district attorney for San Francisco and then Attorney General of California, would flash his badge to avoid paying the toll on the bay bridges. Maybe there was an imbalance: not enough humility on the part of the dad (although politicos that think big generally do have outsized egos that deliver outsized results,) and too much humility on the part of the son. It might have been a better fit if Jerry’s coin-flip had landed on “church” instead of “state.”

Even dog catchers, at the archetypical lowest rank of elected officials, project power. That’s what politics is about: taking power and using it. You “go where the power is,” as LBJ liked to say. Take something small, make it important and it will add to your power. LBJ used his power in the 1960’s to create a legacy that included the Civil Rights Act, the Clean Water Act and the Clean Air Act.

But first you have to have the power before you can create a legacy. The crucial difference between these father and son governors is that one knew how to use power to reflect his leadership and bring memorable good to the people and the state -- while the other hasn’t and may never do this.

Like LBJ, Pat Brown knew how to create big things to benefit as many Californians as possible – water which is the lifeline of the state, freeways for its mobility, and higher education to nurture the state’s intelligent workforce.

Son Jerry will leave us with his hundred-billion-dollar “bullet train” that future generations will be financing through taxes for many decades. His attempts to claim the spotlight on climate have been trumped by actor Leonardo Di Caprio. But other than these two recent initiatives, what else does he leave us to remember him by? Sadly, it’s been his downgrading of CEQA and telling developers and politicos that they can skirt the environmental laws and fast-track their building projects. Brown Junior has let the state’s residents know they need to get used to living on the wrong side of the “fast tracks” -- that their objections to the environmental impacts created by building projects don’t matter anymore.

Who will this action hurt? First of all, the communities whose voices concerning their neighborhoods have been muffled because they may no longer be able to rely on environmental safeguards – the CEQA requirements -- to mitigate the impact of building projects. Another victim is Jerry Brown himself, who may be remembered as anti-environment. Quite an image reversal for someone who once pitched environmental protections through climate control.

(Tim Deegan is a long-time resident and community leader in the Miracle Mile, who has served as board chair at the Mid City West Community Council and on the board of the Miracle Mile Civic Coalition. Tim can be reached at timdeegan2015@gmail.com.) Edited for CityWatch by Linda Abrams.