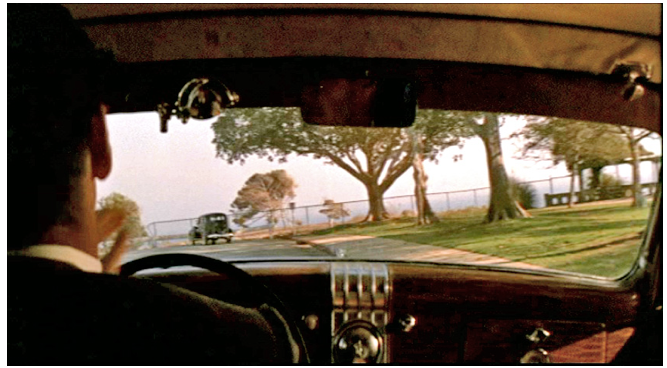 GELFAND’S WORLD--Things have calmed down a bit, but for nearly two weeks, a film production company parked rows of trucks along our San Pedro streets, took over a swathe of the local park, and for lack of a better term, generally annoyed the local residents. One of my neighbors described how a mobile bathroom truck emptied its tanks into the sewer at the crack of dawn, creating an overpowering stench that filled her house.

Others talked about the loss of street parking. What we were experiencing in microcosm was the experiences of people all over town. It's the result of political decisions creating a system that is in part justified by economic necessity, but it's a system that could be much improved. Unfortunately, our elected officials are terrified of even raising the question. (Photo above: Scene from movie classic Chinatown shot in Point Fermin Park.)

The scene: Point Fermin Park in San Pedro. This has been a popular filming location for years. Last week and the week before the movie Deported was being shot here. Deported is an independent production which is described as a romantic comedy involving a young American man and his Canadian girlfriend. I guess the writers were trying to develop a story of cultural and ethnic diversity.

Deported took over the area, as hundreds of other productions have taken over other parts of town. It wasn't as bad as a previous film shoot that had a helicopter flying right overhead emitting loud simulated gunfire, an experience that frightened quite a few local residents. In both cases, many residents did not receive advance warning.

It doesn't have to be this way. It's not hard to see that the entertainment industry could be more accommodating to local residents, but it obviously hasn't been forced to do so. The bottom line, which I'll discuss below, is that it is going to be up to us civilians to negotiate a better system if a better system can be had. We shouldn't expect the political class to get themselves involved.

Why must Angelenos put up with the strains of location filming? There are a couple of reasons. One is airplanes. The other is Joel Wachs. The airplanes are a problem because we don't manufacture them around here, at least not on the scale that we did during WWII and in the postwar years. As Los Angeles lost its role as a major site for the development and construction of passenger aircraft, it also lost a lot of high paying jobs. Some other industry needs to fill that economic role, even if it's only in part.

The city relies on film and television production to employ people at reasonable salaries. The city (like a lot of other states and countries) is willing to give up on some potential tax revenue in order to keep the industry going locally. This is straightforward macroeconomics. Well paid workers spend money on houses, clothing, food, cars, and everything else, and the city takes a cut in the form of sales taxes. The rest of us benefit through the prosperity of the local economy.

Elected officials have been worrying about runaway production for decades. It's a strange term, runaway production, because it implies a sort of entitlement enjoyed by Los Angeles. We don't complain about runaway oil drilling, or runaway agriculture, even though we once were competitive in both. But we want to stay competitive in entertainment. That's where Joel Wachs and John Ferraro come into the story. You can read about it in newspaper clippings from the mid-1970s. Previous to that time, location filming was mostly illegal in much of the city. Ferraro and Wachs got the City Council to approve changes in the law that made possible what we now are experiencing.

The regulatory system has gone through various phases. As of right now, the city and county (and several other adjacent cities) have an agreement with a nonprofit corporation called FilmLA [http://www.filmla.com/] to oversee the permit process for location filming. FilmLA is supposed to be a one-stop-shop. For the filmmaker, this is a huge improvement over a previous system which often involved getting separate permits from each of multiple districts and agencies.

Here's an example of how things used to be. Back before the single agency permitting process came into being, a friend of mine was tasked with getting a location near the harbor breakwater for a location shot. As he explained, he eventually dealt with eleven different agencies and authorities in order to achieve the proper paperwork for this one shoot. He mentioned the city, the county, the port, the Coastguard, the fire department, the port police, and so on. Each one had to sign off on the application.

FilmLA was created to cut through this kind of red tape. It is generally successful in helping film and television to get permitting in a rapid and fairly inexpensive way. But FilmLA is also supposed to be sensitive to the greater public interest. FilmLA claims that things have improved over the past few years, largely due to better communication among the public, the film companies, and FilmLA. For the residents of the Point Fermin area, this claim rang a little hollow, but apparently there are areas in the San Fernando Valley that used to be under siege by location shoots, and now have some little relief from the onslaught.

FilmLA will come out and talk to your neighborhood council about your local issues. Last week, my neighborhood council met with Guy Langman, a Community Outreach Liaison for FilmLA. He listened patiently as my neighbors complained about the Deported takeover of the streets and the park. He explained that FilmLA tries to limit the negative effects of location film shoots, and is trying to work with people around the city. Langman even suggested that I put his work email in this column so that you can contact him to set up your own neighborhood council discussion. Here it is: glangman@filmla.com

Since there was so much discussion about Deported, I wandered down to the site of the filming to find somebody to talk to. I spoke to one young staffer who explained patiently how he had done his best to limit any difficulties brought on the local community. There is one lesson that jumped out at me during this discussion. In planning their location shoot, Deported tried to get use of a large publicly owned parking lot that is right across the street from the park. As the young man described, they were denied permission to park their trucks in the parking lot because there were competing events over the July 4th weekend and the succeeding weekend. So they took over a large part of the last block on Gaffey Street, thereby denying use of that block to the locals and to coastal visitors.

This suggests a failure of the system. Point Fermin Park (as so many other parks) has a busy calendar of events. FilmLA and other city agencies should be able to coordinate their efforts. There is no reason that the Department of Recreation and Parks couldn't work with FilmLA to deal with scheduling issues. Deported should have been told that it could either reschedule to a different time or scale down its intrusion.

There are a lot of additional issues that should be discussed at another time, such as the rights of local residents to object to a location shoot happening at all. For now, we might consider the way to achieve some improvement in the current system. As I mentioned above, I don't think we can expect much help from our elected City Council. For one thing, they want to keep the industry in town. But it's also obvious that the political players are terrified of lifting a finger to help the belabored public. The industry has too much clout.

For this reason, the best chance we have is to try to have some quiet, polite chats with the entertainment industry about how to get along better. This might be a useful thing for neighborhood councils to try. I think that it might be possible for local residents and businesses to help the industry, while getting help from the industry in turn.

Here's one possibility that I've mentioned before. The downtown San Pedro area has been a popular site for location work, but due to one unfortunate incident a few years ago, there are special rules for filming in this area. I think the rules are needlessly limiting. We could develop a less restrictive set of rules and, in exchange, work out ways for the local economy to get a boost from local filming. We might sit down over coffee and simply ask them what they want, and they can ask what they might be able to do to help us a little.

A huge story that is starting to build--Major news organizations have been putting together data and connecting the dots.

The picture that emerges is still a bit tentative, but it is nevertheless damning regarding Donald Trump's judgment and even possibly his loyalties. The story involves Trump's deep economic connections to Russian money which is in turn connectable to Putin.

Josh Marshall at Talking Points Memo provided a summary of news articles that are solid and unimpeachable. Kevin Drum has further summarized. These facts and inferences could be the answer to a question that many of us asked after Trump's speech at the Republican National Convention. Why is Trump attacking NATO, and suggesting that he might not respond militarily to a Russian invasion of our easternmost NATO allies? Imagine what Richard Nixon or Ronald Reagan would have said if a Democrat had ever made such a suggestion.

The implication of the stories linked above is that Trump is beholden to Putin and to Russian money interests, and that he is doing their bidding. The linked articles reference Trump's campaign manager Paul Manafort and the fact that the Trump campaign only threw its weight around regarding one element of the Republican platform, the issue of whether the U.S. should support Ukraine against Russian meddling in its eastern region.