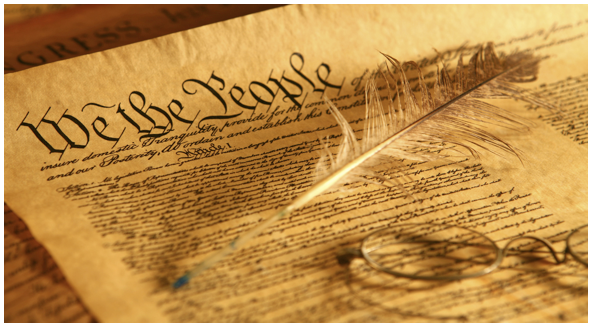 POLITICS LA--Among the British-inflicted “repeated injuries and usurpations” spelled out in the Declaration of Independence, none holds greater significance for Angelenos than does the English king’s crime of erecting “a multitude of New Offices” and sending “hither swarms of Officers to harass our people, and eat out their substance.” Could the Framers have been referring to anything other than the Enforcement Division of LA City’s Ethics Commission? While the chronology doesn’t scan, have a listen to the audio recording of the recent campaign finance “proceeding” against longtime Neighborhood Council member Kelly M. Lord, and you’ll know what we mean.

As we touched upon in an earlier CityWatch piece, Kelly Lord was last month wrongly convicted at the hands of Ethics Enforcement Director by Sergio Perez of campaign violation so tortured in design, so poorly cobbled together, and “out from left field” as to be meaningless. All for a 2011 City Council election in which Mr. Lord raised just $4,000 and got trounced by City Council member Mitch Englander. Thomas Jefferson would do back flips in his grave. The details can be found here.

But for the purposes of this piece, it suffices to underline, two bigger issues with the case, which would exist even if Mr. Lord were actually guilty of a legitimate campaign violation, which, again, he was not.  To put it simply, the four ethics commissioners, Serena Oberstein, Melinda Murray, Ana Dahan, led by chair Nathan Hochman, made mincemeat of Mr. Lord's constitutional rights by holding precisely the kind of Kangaroo court persecution which colonial Americans suffered at the hands of British thugs.

Due process requires in layman's terms, that the government can't take your possessions or prosecute you for a crime whenever they feel like it and for any reason that tickles their fancy and without a rule book for the proceedings.  The constitution makes the government jump through many hoops before they can deprive you of your property and or freedom.

One could hardly imagine a trial with less due process than the prosecution of Kelly M. Lord. First, most of us think it is important in a trial to have a judge. But apparently not the Ethics Commission.  According to their manual, the presiding officer needs to have not a single qualification including a law degree.  According to the commission's whim, the presiding officer can be anyone of the commissioners or the commissioner's as a group, or (the only sane alternative) an actual judge provided by an organization certified and experienced at conducting administrative hearings.

In other words, there is no requirement to have any idea what they are doing.  In the case of Kelly M. Lord it was the commission's whim to have its Vice President Nathan Hochman play the role of judge.  It just so happens that he is a lawyer, though not one with any experience as a Judge, the small wrinkle in the choice of Hochman as we've mentioned in these pages before is that he is a campaign donor to precisely the person Kelly M. Lord was running against, at the time of his alleged campaign violation: namely, City Council Member and recently trounced county supervisor candidate, Mitchell Englander (who, through no fault of his own, also happens to be the nephew of the single most successful lobbyist in the Los Angeles region.)

Listening to Hochman, Enforcement Director Sergio Perez and the rest of the commission fly by the seat of their pants in conducting the tribunal against Mr. Lord, will shock even the most unscrupulous lawyers. At the end of the proceeding one listens with horror and disbelief as Mr. Hochman asks if there are any volunteers among the other commissioners or Ethics Commission staff to draft the official finding of fact and application of law (ie. the official judgement against Mr. Lord).  Did that volunteer need to be a lawyer, let alone a lawyer with any experience or training in such matters?  Nope.  Did the volunteer have to have the faintest idea of what he or she would be doing?  No siree, Bob!   Could the volunteer have been the receptionist at the Ethics Commission?  Why not?  If he or she is willing to pitch in.

The friendly patter and good-natured chuckles exchanged among the commissioners during the phase of the trial at which the extent of the punishment was being mused over is sickening when one thinks about Kelly M. Lord sitting just a few feet away, twisting in the wind.  After each of the commissioners had had an opportunity to expound on his or her feelings of how much or how little to mitigate or make harsher the punishment of Mr. Lord, they satisfied themselves with an eye-popping fine of $15,900.  By comparison, Mr. Lord's campaign raised in total, barely $4,000 dollars, which brings us to the second violation of Mr. Lord's constitutional rights: Eighth amendment which prohibits the levying of "excessive fines."

This independence day is an appropriate time to call for a complete dismantling of the enforcement division of the Ethics Commission. Violations of the law including those related to elections and campaign finance should be handled by actual professionals acting in accordance with actual rules of due process and presided over by actual judges, who actually understand the Bill of Rights.  This is not at all to say that the whole of the Ethics Commission should be shut down. On the contrary, the extensive data base it provides of campaign contributions, money spent on lobbyists, and other tools of pay-to-play is an invaluable service to the public.

“And as for Mr. Lord, he should take that $15,900 judgement against him, show it to a civil rights lawyer, and then do with it what those fed-up citizens at Boston harbor did with all those crates of tea.”

(Eric Preven is a CityWatch contributor and a Studio City based writer-producer and public advocate for better transparency in local government. He was a candidate in the 2015 election for Los Angeles City Council, 2nd District, and is an elected member of the Studio City Neighborhood Council. Joshua Preven is a teacher who lives in Los Angeles.)