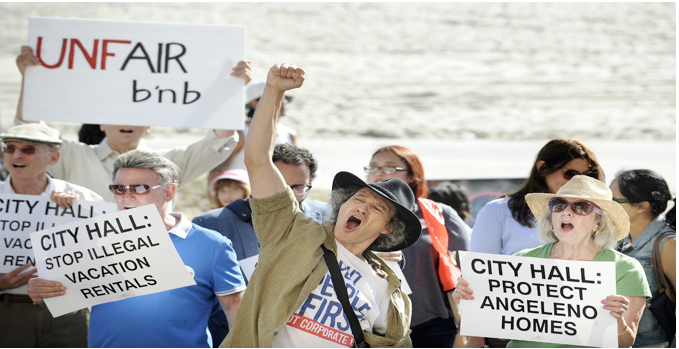 DEEGAN ON LA- Mixing and matching the needs of guests, hosts, neighbors and the City is a challenging problem being attacked and defended from all sides, as a prospective Short-Term Housing Ordinance makes its way through the review process and into law.

The huge black eye of “party houses” has only fueled the debate for those who do not want short-term rentals. These houses, many of which charge admission, often rent short-term just for the weekend, frequently beginning the party on Friday evening and not ending it until Monday morning.

Ersatz country clubs by day and dance halls at night, these hillside houses are both loud and a threat to public safety when the narrow canyon roads are clogged with double-parked cars that make it impossible for emergency vehicles to pass through. When the police arrive, responding to complaints from neighbors, it’s easier to take the ticket and pay the fine then turn down the volume. Tickets are a cost of doing business.

Help with the party house problem, though, is on the way. Councilmember David Ryu (CD4) has introduced a motion

that will regulate party houses. It’s now with the Public Safety committee, and City Council President Herb Wesson has ordered that the Planning and Land Use committee (PLUM) also review it. It’s gotten so bad that some developers are building houses in the hills with the intention of turning them into party houses. There will be public hearings and a vote by the full city council that will lead to the Mayor signing whatever ordinance is developed into law.

Party houses are the “poster children” for what can go wrong. But they are not the only objectionable elements in the booming “shared economy” paradigm – a phenomenon that has introduced the world to Uber, Airbnb, and other ways to access transportation and housing -- doing it your way.

A hearing by the Planning Commission on June 23 did little to resolve the overall short-term housing matter, except for allowing an opportunity for the commissioners to vote for extending the number of days that a host can rent short-term – extending it to 180 days annually, double what had been proposed as a 90-day limit. While some cheered that extension, others were upset that this represents an upward trend. The Commission also considered a 15-day limit on the rental of second homes. That issue is worthy of a separate hearing and review.

"We have seen hosts voice concerns about the proposed cap -- from the number of days to the fact that it applies to a person even if they are just sharing a spare bedroom in their home. Even with the proposed 180 days that is an increase from the original proposal of a 90 day annual limit -- when someone shares a spare bedroom, or the home in which they live -- these don’t represent housing units taken off the market, but rather, the homes of middle class people trying to make ends meet,” says Glenn Gritzner with Mercury, speaking for Airbnb.

Key issues of the proposed ordinance include the types of residences permitted, registration of housing units so they can be tracked, having a cap on the number of rental days (the 180-day decision), data-sharing from rental platforms (the booking agencies) to the city so there can be monitoring and enforcement, setting and collecting fines for breaking the rules, and the collection of the city’s 14% transient occupancy tax (TOT).

The pros and cons include regulating what has traditionally been a unregulated mom and pop business, and accountability and standardization that applies to hosts and “platforms” -- tech-speak for online websites where you can advertise your property if you are a “host” or find lodging if you are a “guest.”

Regulation and accountability through registration, monitoring, reporting, and taxation would go a long way to stabilizing this market before it gets really out of control.

The simple way to get the taxes collected, offers Helen Walker, who manages several properties, is to sign up with a service like Avalara at mylodgetax.avalara.com.

“They send a reminder every month and we just sign in to their website any time between the 1stt and 10th of the month, and report the income for the prior month. They calculate the taxes due and pay them to the tax collector and the money comes directly out of our bank account. They charge a small service fee for filing. No muss, no fuss. They automatically renew our business license each year, too. They take the burden off the websites having to report to the City, and puts the burden squarely on the property owner/manager, where it should be in the first place. What could be easier?”

Organization like the Short Term Rental Association have mixed feelings about the ordinance. Executive Director Robert St. Genis is concerned that the process may move underground, away from any sort of standardization or quality control or accountability which are all features of the proposed ordinance.

He adds, “There are parts of the ordinance that we like, such as TOT (transient occupancy tax) revenue payments going into affordable housing, and we support registration, and registration fees within reason, but don't agree that portals should be the policemen. The term limit of 180 nights is a job killer, completely arbitrary and accomplishing no goals whatsoever other than hurting livelihoods and killing jobs.”

“A key component is the use secondary homes as vacation home rentals. That may need to be addressed in a separate ordinance. Many, many owners own vacation residences, and generations of families have been doing this for decades.”

“At the end of day, this is such a complex issue that it cannot be dealt with by one piece of legislation. All agree it is not going away. So, how do we address it? We don’t want to drive it underground.”

With no controls, measuring the size of the short-term rental market is hard to gauge, but best estimates by independent monitors are that there are 20,000 “hosts” in LA. Ari Teman, the entrepreneur behind the Airbnb monitoring software Sublet Spy

What does the establishment say, those that are now faced with challenges to their business model? Barbara Nichols, a real estate broker, cites several concerns, including, “Long term renters are vetted, credit checked, and background checked. You know who you are dealing with. When you move into a single family neighborhood you have an expectation of knowing who your neighbors are. Strangers in and out of a neighbor’s house destroys neighborhood connections. If the argument for “home sharing” is to help a homeowner pay the mortgage, a homeowner can rent a spare bedroom for six months or a year and currently get the same benefit.”

Users of Airbnb are enthusiastic about the availability of obtaining housing for a few nights when traveling, and point out the non-financial benefits of hosting. David Mann, who has experience as a host and a guest says “When I host, I proactively engage with my guests and that way get to know people from everywhere. They sense I am interested in what life is like in their part of the world, and friendships have developed during and after their stay. It’s more of a social relationship than an economic relationship. My one bad experience as a guest was immediately remedied by Airbnb staff beyond my expectation."

A few days ago, the city stepped in, with City Attorney Mike Feuer filing charges

against apartment owners that allegedly evicted tenants, then rented out their units via Airbnb. With regulations, Airbnb would be required to flag an egregious situation like this and block the landlord from renting through them and profiting unfairly. Other platforms could do the same. Platforms can already voluntarily ask the city housing department for this information, but do not.

Attorney Randy Renick of Hadsell Stormer & Renick, who is representing some of the evicted tenants, says that “Airbnb is a co-conspirator in this scheme and needs to be taken to account. They've known landlords have been violating the RSO for some time, using the Ellis Act to wrongly evict tenants, but they’re willing participants in re-renting units. The city housing department can provide a list of Ellis Act evictions on request. Airbnb could use that to filter out properties that do not qualify for short term rental. As I understand it, the City Attorney is going to be sending the list to Airbnb, whether they like it or not.”

Legal action is a good start, but enforceable guidelines are a solution. That’s the big challenge now, with so many different perspectives from City Councilmembers, hosts, guests, platforms and the public all weighing in.