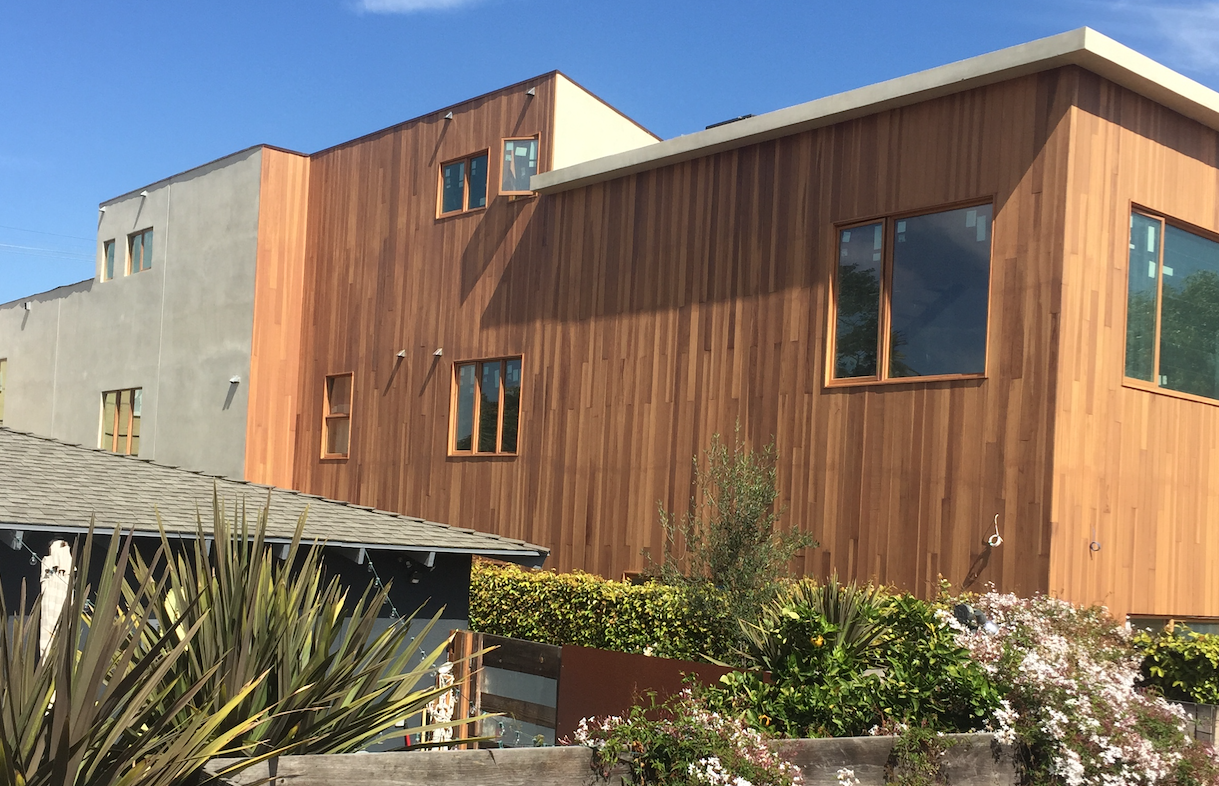 VOICES OF THE PEOPLE--The big-bucks three-story duplex looks like a boxy alien spacecraft that strayed off course and crash-landed among the row of bewildered 1940’s bungalows in Venice. Standing across the street from this monstrosity, long-time Venice resident John Galbraith tells a visitor: “This kind of construction is happening all over Venice. This isn’t even the worst of it.”

Still, this duplex in the 600 block of Broadway Street has gained a certain notoriety. (Photo above.)

A recent lawsuit cited the structure as a prime example of a dysfunctional system at City Hall. The lawsuit, filed by a Venice advocacy group, alleges Los Angeles city officials have illegally permitted hundreds of properties to be built or significantly remodeled in Venice.

“The laws are on the books to deal with projects like this but no one’s enforcing them,” Venice yoga instructor and former land-use attorney Max Sloves said as he stopped riding his bike to talk to a visitor. “Venice is so far away from City Hall. We feel disconnected. These buildings go up so fast that before anyone knows it they’re built.”

Now the Venice Coalition to Preserve Unique Community Character has filed a lawsuit to put the brakes on this frenzy. The lawsuit alleges these projects often do not comply with the area’s land-use plan and that local residents are illegally kept in the dark about these projects until the demolition crews show up.

The result is disastrous, the coalition claims. “Real estate speculators and developers threaten to irreparably alter the neighborhoods that make Venice unique,” the lawsuit alleges. “Developers are destroying Venice’s quaint, historical neighborhoods and their affordable housing at a breakneck speed….[as city officials] have engaged in a pattern and practice of unlawfully approving development projects….”

“What’s happening in Venice is outrageous,” says Jill Stewart, campaign director of the Neighborhood Integrity Initiative, a city-wide measure to put the brakes on major development projects city-wide and empower local residents so they can regain control of development trends and activities in their communities.

“Venice’s fight is the same as our fight,” Stewart said. “We’re both fighting to overturn a rigged system at City Hall that allows developers to bend the rules and work in secrecy to get their projects approved. The public is left holding the bag in the end. Our streets are overwhelmed with additional traffic, the character of our neighborhoods is disrespected, working class families are displaced and our environment becomes less hospitable and less sustainable.”

According to the Venice Coalition lawsuit, the city’s Planning Director is supposed to certify that projects being built in neighborhoods protected by the Venice Land Use Plan and regulated by the state Coastal Act are “visually compatible with the character of the surrounding areas and structures and respect the scale, massing and landscape of existing residential neighborhoods.” In fact, city planners are simply not making such findings as they issue the VOS permits. Nor, according to the lawsuit, could the planners make such findings – in many cases – if they acted in good faith.

The city also illegally fails to give adjoining property owners notice of impending VSO projects in their neighborhoods and denies them the right to oppose those projects “in writing and at a public hearing,” the lawsuit further alleges.

The duplex in the 600 block of Broadway Street is an example of City Hall’s disregard for the law, the lawsuit claims.

This block is “characterized by small, single- and two-story homes that are set back from the street and surrounded by trees,” the lawsuit states. “The proposed development [as of this writing it is still not finished] is a three-story duplex that takes up the vast majority of the lot and does not provide sufficient room to plant trees.” Despite it all, this project was green-lighted by city planners.

The lawsuit cites another project in the 600 block of Santa Clara Avenue. “The new structure looms above adjacent homes,” the lawsuit says. “It is visually jarring and architecturally incompatible with existing homes.” The lawsuit adds that the Broadway and Santa Clara projects “are only two of hundreds of examples of VSO projects approved by Defendants.”

As the twilight crept across Venice one day this week, John Galbraith remarked that the Broadway duplex is “just a big rectangular box, with no room for foliage or landscaping. It’s the future.”

The “future” looms over the one-story duplex immediately to the west. On the other side is a vacant bungalow with junk mail piling up in a mailbox. It has all the hallmarks of being the next site for Venice’s future to plant its flag.

(John Schwada is the communications director for the Neighborhood Integrity Initiative. He is an award-winning journalist and an occasional CityWatch contributor who previously worked for KTTV, the Los Angeles Times and the LA Herald-Examiner.)