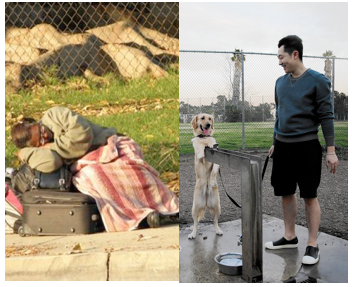 RUSS REPORT--Last week, the U.S. Veterans Administration (VA) introduced its Master Plan for the West Los Angeles VA (WLAVA) campus and dog owners are, once again, “up in arms” about the potential closure of the “community” dog park.

The gates to the Brentwood Dog Park were padlocked for one day last October, then magically reopened the next day because, it appeared, that some last minute deal making between “well connected” dog owners and “the powers that be” occurred.

What subsequently followed was an agreement to leave the dog park open until after the Master Plan developed by the VA was introduced in 2016. During mid-2015, the VA notified several leaseholders that their leases would be terminated. The City of Los Angeles, whose lease ran out in 1991 for the dog park, was notified the park would be closed unless the City could find a way for the park to directly benefit veterans.

But it’s not only JUST about the dog park on the VA campus; it’s about the fact that a dog park shouldn’t be there in the first place. It’s about an 1888 Deed that conveyed 300 acres of land to our nation’s veterans who honorably served this nation. It’s about a permanent home for them to recover in from their wounds of war -- not a place for wealthy people who take their dogs to play for free -- courtesy of LA taxpayers.

Marcie Polier Swartz, a property owner in Brentwood Village, penned an article for www.Westsidetoday.com in November 2015 urging her neighbors to oppose closing the dog park by commenting at the Federal Register because angry veterans and bureaucrats in Washington will be to blame for the potential “ruination” of their community. Swartz echoes the sentiment of many in the affluent Brentwood community.

Those who use the dog park would welcome veterans in “their” park but anyone with half a brain understands that not very many chronically homeless veterans are able to have or care for a dog.

Immediately following Otero’s decision, the Brentwood School and the UCLA Regents wasted no time in filing a Motion to Vacate and re-litigate Otero’s order. Both entities swore they knew nothing about the lawsuit until after the Judge’s decision -- a preposterous claim, indeed.

On the heels of that decision, an appeal filed by the VA landed in a settlement with the creation of a VA Master Plan after many months of often acrimonious meetings between the U.S. Department of Veterans Affairs (VA) and veterans, West LA residents, health professionals and elected officials to complete a Master Plan for the VA grounds. The VA took into account more than 1000 comments.

Last week, Secretary of Veterans Affairs, Robert McDonald, touted the Final Master Plan that calls for the construction of some 1,200 housing units for disabled and traumatized veterans. The Plan also calls for 700 short-term units for homeless veterans and a village for women veterans who have been sexually traumatized. McDonald envisions an entire community designated for the well being of veterans. At a Press Conference, McDonald shared his vision, “There’s amphitheaters, recreation facilities, everything for the physical health, the mental health and the spiritual health of veterans.”

But paying ‘lip service’ is not enough. [Any] plan must honor veterans first by terminating leases of companies taking up space on the VA campus and prohibiting all non-veteran events that have nothing to do with veteran well being.

Behind closed doors and much to the chagrin of many veterans, the VA signed a $300,000 per year “agreement” with UCLA to allow Jackie Robinson Stadium to remain on the property. The agreement hinges on passage of U.S. Senator Dianne Feinstein’s proposed legislation.

The Bill’s summary “authorizes the Department of Veterans Affairs (VA) to carry out certain leases at the VA's West Los Angeles Campus in Los Angeles, California, for: (1) supportive housing; (2) health, education, family support, vocational training, and other services that principally benefit veterans and their families; and (3) a lease of real property to a California institution that has had a long-term medical affiliation with the VA at such Campus.”

UCLA’s Jackie Robinson Stadium was illegally built on VA land but will be granted a 10-year lease that Feinstein’s bill, that Section 3 (in the summary) all but guarantees a permanent home for the Stadium based on the agreement between UCLA and the VA- after the bill passes and becomes law.

Perhaps it’s just a coincidence that Feinstein’s husband is serving his second 12-year term on UCLA’s Board of Regents. After 10 years, UCLA’s planned “new” initiatives will certainly credit UCLA as having a “long term medical affiliation with the VA at such campus.”

The Brentwood School insists that because they have impeccably landscaped the land and have offered ample access to the 20 acres of land to veterans where they built an athletic complex (that, by the way, is padlocked from the VA side and is off limits to veterans), somehow that earns them the right to remain on veterans land. Here are the crumbs the Brentwood School has thrown to veterans. Oh…and they also paid a paltry $5M in rent over a 16-year period. Feinstein’s bill would also insure the Brentwood School could remain on Veteran’s property.

It took over a decade and a whopping $20+ million to renovate Building 209 on the VA campus to house (at present) 37 veterans who have graduated a program and are gainfully employed in either private sector or government jobs.

Professor Gary Blasi of UCLA Law School said, “Building 209 cost $20 million because it was mismanaged and because the decision was made that the seismic work had to be at the level of "mission critical" (same as hospitals and fire stations) rather than "life safety," which is the case for all other housing.”

The promise to renovate buildings 208 and 205 were a part of a 2004 initiative designated for homeless housing of some sort under Secretary of Veterans Affairs, Jim Nicholson. Today in 2016, those buildings remain in disrepair.

Severe PTSD, traumatic brain injury, alcohol and substance abuse and mental illness makes it nearly impossible for many veterans to seek help but Blasi says if someone can get a homeless veteran to The Welcome Center (Bldg 257), there are options.

“There is bridge housing available from that night until the Vet finds housing,” he said. Blasi acknowledged issues with outreach and transportation but was optimistic about improvements in the future and promised an ongoing involvement.

“There are issues of outreach and transportation, but active work is going on to improve those, including being sure that every outreach effort (City, County, LAHSA, etc) identifies Vets and provides a ‘warm handoff’ to trained people who can assist with transportation and intake,” he said.

For years, the WLAVA has been lax in response time to veterans and care has been abysmal for thousands of them. In turn, that treatment has created an air of distrust among veterans.

“There is ample reason for Vets to be skeptical, given the history of this campus,” continued Blasi. “All I can say is that we (the legal team and the nonprofit we set up to work on implementation) are not going anywhere and will stay on top of this for at least the next 10 years. We can always go back to court, if that turns out to be necessary,” he concluded.

In late January, the U.S. Senate voted, unanimously, to authorize $35M for homeless veteran housing on the WLAVA campus. The money would be used to repurpose and/or retrofit one of the empty buildings into 65 apartments for veterans. That is a cost breakdown of $500,000 per bed -- comparable to the cost of Building 209’s retrofit. Approval must still pass in the House of Representatives.

Using veteran contractors instead of government contractors would save millions of dollars in construction costs and could employ hundreds of veterans in the process -- a suggestion that the VA will, most certainly, not consider.

As an afterthought -- perhaps charging membership fees for those who demand the dog park and baseball fields remain open isn’t such a bad idea after all.

(Katharine Russ is an investigative reporter and a regular contributor to CityWatch. She can be reached at [email protected].)