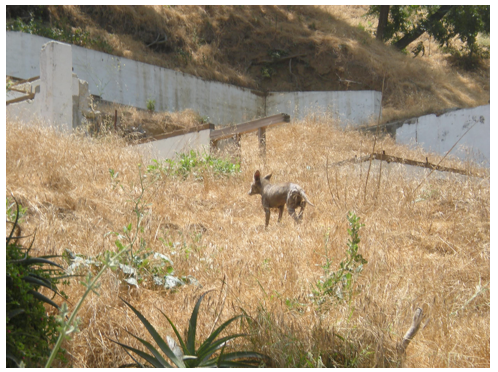 DEEGAN ON LA-Our hillside inhabitants, the wildlife species that once dominated and survived there, now desperately need help in moving around and through our increasingly congested built environment.

They must have the equivalent of “diamond lanes” that environmentalists say will help them move about quickly and safely. Without these “wildlife corridors,” fragmentation occurs, isolating wildlife within the man-made boundaries that obstruct free movement and prevent the animals in the hills of the Santa Monica Mountains from feeding, seeking refuge and migrating between seasons. Depriving these creatures of their natural habitat sets them on a downward trajectory toward extinction – and the countdown to zero habitation is underway.

We cannot allow ignorance of a situation to produce a result that could be remedied through awareness, education, and action. In particular, politicos should stop ignoring a legislative proposal that was made almost two years ago and start making the preservation of our wildlife a priority.

Incipient dangers to our hillside wildlife population is a pressing issue – but one that is barely on the radar of the human hillside residents, developers and builders, as well as elected officials. But a growing awareness of this situation may be due to the work being done by local environmentalists, including advocates like CLAW (Citizens for Los Angeles Wildlife,) that have organized to “promote, educate and protect the fundamental importance of wildlife, wildlife habitats and wildlife corridors in Los Angeles.”

Urban wildlife advocacy is becoming an urgent form of environmentalism in Los Angeles.

But even if the concept of “environmentalism” is embedded in our consciousness, it still needs activation by committed supporters. You can never be too rich, too thin or too concerned about the environment, whether it be climate change or wildlife protection.

Urban wildlife advocacy may be a “growth industry” on red alert, waiting for you to get involved and share your concerns and commitment to protecting and improving the health of the environment that surrounds us.

Who knows how many species of wildlife might be coexisting with humans in the hillside landscapes? Activists like Tony Tucci, a founding Co-Director at CLAW, are spreading the word to help us understand the holistic world we live in. Environmentalism is getting the attention it deserves; a new generation is learning that the hills are alive with the sound of not only house parties but….wildlife.

CLAW reminds us that “To live in Los Angeles is to be part of a unique and vital experiment: the co-existence of a growing human population within the urban wilderness interface.”

The mission of CLAW is threefold: (1) to protect wildlife habitats and corridors throughout Los Angeles and California, (2) to restore habitats destroyed by development, and (3) to educate citizens about how to co-exist with their animal neighbors. 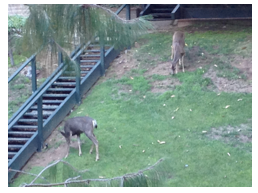 Our hills have always been alive with wildlife. We humans need to shift gears and learn to live with them instead of shutting them out by claiming the chaparral-studded canyons as exclusively our own.

The activists at CLAW understand this, as do the growing ranks of their supporters. Councilmember Paul Koretz (CD5,) whose district includes a large chunk of the Santa Monica Mountains, also understands. He is supporting a CLAW initiative to create an ordinance protecting wildlife corridors.

Awareness is trickling down from the mountain tops, so to speak; people are learning about wildlife corridors and wildlife preservation, gaining a respect for local wildlife and finally becoming part of the city planning conversation. But we need more people, including hillside homeowners and developers, to become engaged in the planning dialogue.

Unfortunately, these conversations have not prevented or even slowed down the continued building out of hillside canyons with housing, threatening the viability of wildlife. This is leading to what the experts call habitat fragmentation, a situation that occurs when animals lose their connectivity to wildlife corridors. As defined by CLAW, “a wildlife corridor, habitat corridor, or green corridor is an area of habitat connecting wildlife populations separated by human activities such as roads, fences or structures.” These are the “diamond lanes” that will preserve the future of our local wilderness habitat.

What exactly is a “wildlife corridor”? According to CLAW it:

Simply summarized, “Without a wildlife corridor, animals can’t get to the food, shelter and mates they need to survive.”

Almost two years ago, on April 23, 2014, Councilmember Paul Koretz (CD5) proposed an ordinance to create a wildlife corridor. Asked about its status by CityWatch, a spokesperson for Koretz hedged, "We expect the wildlife corridor motion to be heard in Planning Committee very soon." But we need to add an asterisk on that declaration: the motion has been gathering dust at City Hall, and its expiration date is April 23, 2016 -- seven weeks from now. If a sponsoring elected official can’t generate enough attention and interest from their colleagues before the statute of limitations runs out on a motion, it automatically dies.

But a developer who wanted to build in the hills would never need to wait that long for a zoning variance. During the 22 months that this wildlife corridor motion has been waiting to get the attention it deserves, more hillside housing has been built; the noose around our hillside wildlife has tightened. The results of this delay are literally deadly.

How seriously this motion will be taken at its next destination, the Planning and Land Use Management Committee, is unknown. This is why activists are starting to campaign for action before it’s too late. To be approved by both the PLUM committee and the full city council, the motion will need to have cleared the objections of developers who have routinely been carving up the Santa Monica Mountains – people who are either ignorant of, or, sadly, do not care about the environmental impacts they are making. So often, the only green that interests them is money.

Councilmember Paul Koretz’s motion was seconded by Mike Bonin (CD11), and included signatures from Jose Huizar (CD14), Tom LaBonge (CD4) (now retired) and Mitch O’Farrell (CD13.) CM Huizar is the current chair of the PLUM committee that is next in line to hear the motion. This could be an encouraging sign, but there’s no guarantee. In politics, twenty-four hours is a long time, and it’s been nearly two years since these council members publicly supported the motion. Who really knows how they feel about it now? Or, how the developers may have helped them feel about it?

The Koretz motion, known as Council File 14-0518, moves to “require the city planning department and department of building and safety to consider wildlife corridors in any new building plans in the hillsides and provide scientific guidance to keep wildlife habitat linkages and corridors open. It will also require a Biological Constraints Checklist and Wildlife Permeability Review as part of every new building project application in the hillsides of LA.

Further, [there should be] no issuance of building or grading permits until project applicants ensure that they will permanently accommodate wildlife habitat connectivity as part of their development projects. It will require easements or deed restrictions in perpetuity to protect wildlife habitat connectivity. Finally, the motion will formally designate a Regional Wildlife Habitat Linkage Zone in the Municipal Code, in as much as just one single-family residential project can cause adverse impacts [on] threatened wildlife populations.”

A concerned Tony Tucci explains, “Most of the open space parcels in the hills are private property and [what] I am worried about is that we are over-cementing, over-fencing, over-warming, replacing the native oaks with ficus and doing all of this hillside development willy-nilly, just running from project-to-project and not stepping back and looking at our remaining natural lands with the big picture of biodiversity in mind, without stepping back and considering the mountain-range eco system of our city.”

“To my knowledge”, says Tucci, “there is no planning tool on the city books that recognizes the importance of habitat connectivity. CLAW was founded over this deficit (or oversight) due to our first-hand experiences in the Laurel Canyon community. This motion -- the idea of a wildlife habitat ordinance or wildlife linkage zones -- needs to become ordinance, it is critical.”

People who are following the progress of the Neighborhood Integrity Initiative -- -and there are hundreds out collecting the thousands of signatures needed to qualify it for the November 8 ballot – may recognize a pattern here. When it comes to wildlife and development, just like in urban development, there is no “general plan” being followed. And developers have no current legislative barriers dictating where and how they may build in the hills vis-a-vis any protections that should be provided to wildlife.

Says Tucci, in an anecdote that perfectly captures the cycle created when a wildlife corridor is blocked, “I used to live next to almost an acre of lush dense hillside forest which one day became target for an aggressive LLC development group. Over one weekend, this group came in and almost completely clear cut this old growth forest of native oaks, walnuts, 75 ft pines, etc… the scorched-earth attack, presumably to lessen their mitigation requirements (tree replacement requirements,) was before their tree report. Their next move was to surround their cluster of parcels stated for development with a long perimeter fence.

“Witnessing a forest replaced by scored earth, I noticed some very immediate change. During the day the thermostat in my home was three degrees warmer; we did not hear the birds and at night the hoots of the owl and howls of the coyotes [had] disappeared.

“Then, as the real estate market tanked, this property sat for years as a scorched-earth, fenced-in eye-sore. And over that time, I noticed an outbreak of multiple gopher mounds on their property and eventually in all of our backyards; it seemed that the gopher population was growing fast.

“Then, on a slightly windy day, a huge tree directly across the street fell and snapped the power lines. I saw a plume of fire explode from the power pole; I saw power lines arc and spark right in front of my house. The fire department quickly responded, but I wondered what the scenario could have been if the winds were gusting a little stronger. The road was completely blocked until the next day when city workers came to cut and clear the tree. I went out and said hi to the workers and asked ‘what happened?’ The workers said that gophers undermined the roots of the tree…”

What Tucci relates is one of many similar stories and evidence of why action is needed.

The best possible solution for our wildlife and the environment they inhabit is for Councilmember Paul Koretz to build a consensus around his worthy motion. He needs to put it on a fast track to a “yes” vote in the PLUM committee, and then to the full city council. He should help put into law the notion that wildlife diamond lanes are forever.

(Tim Deegan is a long-time resident and community leader in the Miracle Mile, who has served as board chair at the Mid City West Community Council and on the board of the Miracle Mile Civic Coalition. Tim can be reached at timdeegan2015@gmail.com.)   Edited for City Watch by Linda Abrams.