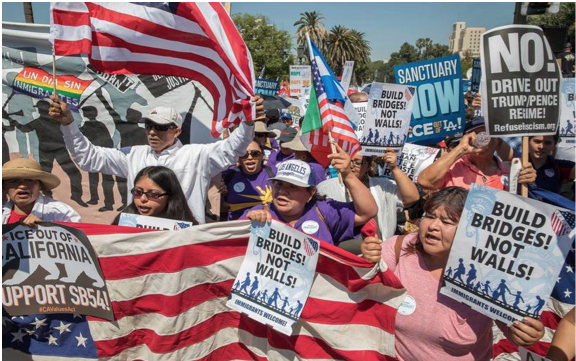 RESISTANCE WATCH--One of Trump’s most horrendous campaign promises was to build a border wall — a divisive structure that will not keep us safe from harm nor create infrastructure to help our country fix crumbling roads and bridges.

There are countless examples of the failure of our nation’s outdated, underfunded infrastructure. Hurricane Katrina and the levees in New Orleans. Lead in the drinking water in Flint, Michigan. The crumbling Oroville dam and resulting evacuation in Northern California. These are all cases of critical structures that year after year are not properly funded in the federal budget.

Trump is either oblivious to or unmoved by the consequences of these catastrophic events on American lives as he remains fixated on the costly wall, even as his administration was forced to pull back the budget allotted for it to prevent a government shutdown.

Resistance from Congress, and from grassroots efforts in cities and nationwide, is gaining momentum. Infrastructure aside, the symbolism of this wall deeply offends American values. It has increased racist anti-immigrant rhetoric and communicated to the entire world that people seeking refuge in America are not welcome here.

Here in Los Angeles in early May, my organization, Los Angeles Alliance for a New Economy (LAANE), joined Los Angeles City Councilmember Gil Cedillo when he announced a motion requiring companies seeking contracts with the City to publicly disclose if they are also submitting contracting bids to build the controversial border wall. This proposal, which is the first of its kind, would also impose strict penalties and fines on any company who fails to disclose this required information.

The motion is aimed at ensuring transparency in the City’s contracting process. Nearly two out of three Angelenos are either immigrants or the children of immigrants who are a vital part of the City’s economic engine. Immigrants contribute billions of dollars in income and make up a significant percentage of both the workforce and business community.

Cedillo’s colleagues on the Los Angeles City Council agreed that residents deserve to know how public funding is spent, and whether or not they are supporting individuals or entities who are involved in the construction of a colossal barrier that is chilling and morally unacceptable to a majority of Angelenos.

Los Angeles labor groups have firmly supported the motion. Rusty Hicks, Executive Secretary-Treasurer of the Los Angeles County Federation of Labor, AFL-CIO, said, “Our message is fairly simple – no wall, no way, not now, not ever. Los Angeles will enshrine the values of respect and inclusion, and reject the false notion that we have to choose between a good job and the safety and well-being of our immigrant neighbors.

Nationally, the Partnership for Working Families (PWF), a national network of leading regional advocacy organizations, has pushed for companies to publicly disclose their affiliation with the border wall. PWF called on Berkshire Hathaway, the company with the largest capacity to provide bonding required for federal construction projects, to publicly commit not to insure the border wall or detention centers.

The pressure is working. Most recently, Zachry Federal Construction Corporation and Shimmick Construction Co. have pulled out of the border wall bidding process. That means that at least 13 companies, including seven of the largest 25 design-build firms, have said they are not bidding.

“It’s bad enough that Trump is focusing his energy on dividing families rather than rebuilding our country,” said Nikki Fortunato Bas, Executive Director of the Partnership for Working Families. “We’re demanding that companies stand up for what is right and refuse to profit off of this politics of hate.”

Whether in Los Angeles or nationally, labor and community leaders are fighting the same fight alongside immigrant rights and other social justice groups. Together, we are resisting, and we are rejecting the false notion that we must choose between jobs and the safety and well-being of our neighbors. We insist that immigrants are not only welcome here — they are critical to the success and the life of our communities and our nation’s economy — and we will never support the building of a border wall.

(Roxana Tynan is Executive Director of the Los Angeles Alliance for New Economy.)