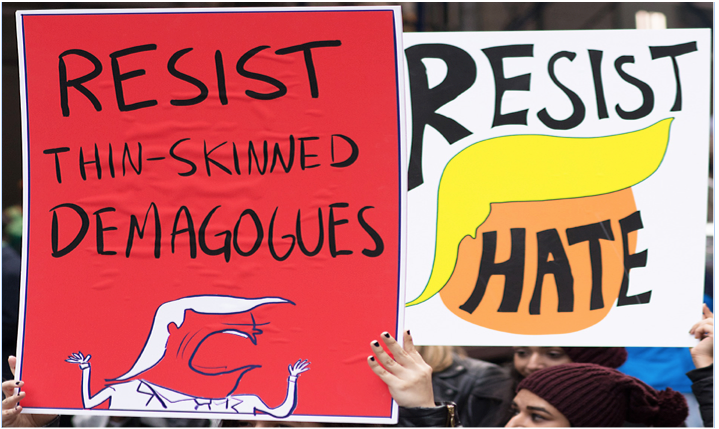 ENGAGMENT--He always knows how to get me.

Whadd’ya think? Ken asks: Resistance Watch? A place to help navigate and organize participation in Los Angeles and parts around? Calendars of marches and meetings, links and profiles of groups doing the work? Videos of resistance activities? News of our successes? Enhanced social media reach?

CityWatch editor Ken Draper is a hard man to say no to. So I’ll bite. And ask you: Whadd’ya think? Here’s what we’ve got so far:

In Your Guide to the Sprawling New Anti-Trump Resistance Movement in The Nation, Joshua Holland sums it up pretty well:

“The widely held view that Trump is an illegitimate president who’s poised to enact an agenda combining the worst of House Speaker Paul Ryan’s ‘granny-starving’ fiscal conservatism with White House consigliore Steve Bannon’s ethno-nationalism has fueled the formation of dozens of new grassroots resistance groups. Some were launched by seasoned political operatives, others by people who hadn’t engaged in activism in the past. Some were germinated during chats on long bus rides to the Women’s March. Not all of them will succeed—some false starts are a given—but like any collection of innovative start-ups, it only takes a few successes to change the landscape.”

He starts us off with a great bunch:

And from CityWatch LA’s own Bob Gelfand: Resistance: Some Call It Treason, or What's an Indivisible To Do?

We’re launching nationwide, volunteer-led canvasses to organize our communities against Trump. Sign up to canvass where you live and invite your friends to get involved, especially if you live in a county that flipped from Obama in 2012 to Trump in 2016. Once you sign up to canvass, you can read our door knocking guide here and register for a volunteer orientation call here.

Control of the House in 2018 will be decided by a handful of Swing Districts, places where the last election was decided by a thin margin. Find your closest Swing District and join its team to learn about actionable opportunities to support progressives—and defeat Republicans—in that district, no matter where you live. We can stop Trump and the GOP agenda by working together NOW.

Run for Something will recruit and support talented, passionate youngsters who will advocate for progressive values now and for the next 30 years, with the ultimate goal of building a progressive bench.

We’ll take a chance on people the usual “institutions” might never encounter. We’ll help people run for offices like state legislatures, mayorships, city council seats, and more. We’ll do whatever it takes to get more under-35 year-olds on the ballot.

Operation 45: Transparency and Accountability for the Administration of Donald J. Trump, the 45th President of the United States.

Freedom of Information Act guru Ryan Shapiro, who has been a thorn in the side of both the Bush and Obama administrations, calls FOIA a “radical experiment in transparency,” at least in theory. In practice, government agencies have become adept at deflecting or deferring FOIA requests, and it takes a special skill set to navigate these bureaucracies.

On November 9, 2016, we immediately started organizing locally for 2018. But we quickly realized that movements need money now. And in addition to local groups, there is a gap in funding scrappy national networks. Our question is always “where can my money make the biggest difference?” We’re also establishing a long-term home (that doesn’t change every year) called the Movement Voter Project (MVP). MVP integrates funding and donor advising with other types of support for social movements and local organizations to do vote work.

Who would have thought of knitting as a vehicle for defending women’s rights? Two erstwhile non-activists from Los Angeles—architect Jayna Zweiman and screenwriter Krista Suh. And they appear to have hit on something, given how rapidly the Pussyhat Project has taken off.

The Pussyhat Project was about making a powerful visual statement at the January 21, 2017, Women’s March on Washington, D.C.  But there’s a whole lot more to this. At its core, this project is about:

And we have just begun to achieve these goals. Because of the hundreds of thousands of people involved in the Pussyhat Project so far, the Pussyhat has grown into a symbol of support and solidarity for women’s rights around the globe.

What's your Movement Match? Are you fired up to fight Trump but not sure where to start? Take this quiz to find your #MovementMatch and get connected! When you've found your match, take the #JoinTheMovement Pledge to commit to join or stay with an organization working for justice in 2017!

People are imperfect. Organizations are imperfect. This quiz is imperfect! If you get a match that you don't like, take the quiz again or check out the list of all the orgs who are looking for new members to pick your own!

This project started as a small group trying to brainstorm about these issues:

#JoinTheMovement was born from these questions.

One thing we know for sure is that there are many groups and organizations that are ready to provide the training, community, and accountability that we’ll need to stay strong for the work ahead.

Our goal is to connect more people to existing activist powerhouses before the inauguration to further build the strength of our movement and fight isolation, alienation, and complacency.

And there are many others, continuing with others on Holland’s list:

Town Hall Project empowers constituents across the country to have face-to-face conversations with their elected representatives. We are campaign veterans and first time volunteers. We come from a diversity of backgrounds and live across the country. We share progressive values and believe strongly in civic engagement. We research every district and state for public events with members of Congress. Then we share our findings to promote participation in the democratic process.

This movement is diverse, open source, and powered by citizens. We are proud to be a part of it.

#ResistTrumpTuesdays is a joint project of The Working Families Party, MoveOn, and People’s Action. Its goal is to turn large numbers of activists out every Tuesday to fight back against a different element of Trump’s agenda. You can follow the action by clicking on the hashtag above, or go here to find a local action near you.

Co-founded by Cenk Uygur and Kyle Kulinski of Secular Talk, JUSTICE DEMOCRATS is recruiting progressive candidates to challenge “corporate-backed Democrats” in primaries and “rebuild the party from scratch.”

By aligning with Wall Street over working men and women, the Democratic Party has allowed Republicans to take over most state legislatures, most governorships, Congress, and the presidency.

The solution is not unity with the corporate-backed Democrats. The solution is to challenge them and replace every single one of them with people who will fight for voters, not donors. It’s time to rebuild the Democratic Party from scratch to be a party that fights for a clear progressive vision.

Feeling overwhelmed by the rush of real news about the Trump regime? Matt Kiser, a tech writer by day, launched a side project chronicling “the daily shock and awe in Trump’s America.” The goal of whatthefuckjusthappenedtoday.com, according to the site’s “about” page, “is to capture the most important news in a digestible form.”

Buycott Trump is trying to get people to vote with their dollars. Organizers have launched a new campaign on top of an existing app that allows you to scan barcodes and QVCs, and offers you information about the politics of the companies who make the products you see on store shelves. You can find links to download the app at the link above.

To make it simply irresistible for Americans to become active participants in our democracy.

He promised a wall.
He will be stopped by a wall of us.

FOUR CONCRETE ACTS OF RESISTANCE
DELIVERED TO YOUR INBOX EACH WEEK

Speaking of the ACLU:

The ACLU will continue to defend our basic freedoms and hold this administration accountable for every unlawful or unconstitutional measure they propose. We will use the courts as one avenue to aggressively advance our agenda, but we cannot do it alone.

That is why the ACLU is launching a major new grassroots mobilization platform, PeoplePower.org, in response to the growing number of people who believe that Trump’s actions cannot go unchallenged.

And for much fun and information: Can't Trump California

‘Til next time, time for action! You’ll feel so much better!

"It falls to each of us to be those anxious, jealous guardians of our democracy. Embrace the joyous task we have been given to continually try to improve this great nation of ours because, for all our outward differences, we in fact all share the same proud type, the most important office in a democracy, citizen." ~ President Obama, Farewell Address

(Julie Butcher writes for CityWatch and is a retired union leader now enjoying her new La Crescenta home and her first grandchild. She can be reached at [email protected] or on her new blog ‘The Butcher Shop - No Bones about It.’)