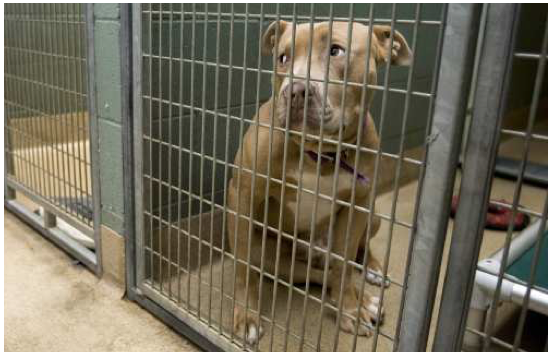 ANIMAL WATCH-“If there is nothing bad or dangerous in a dog’s history--especially Pit Bulls--why would Brenda Barnette hide its records?” asked a visitor at the September 12 Los Angeles Animal Services Commission meeting.

This was the second meeting to gain approval for moving forward with a plan to remove the breed on kennel cards of dogs in LA City shelters. The Commission authorized the preparation of a full report by GM Brenda Barnette. The stated goal is to increase Pit Bull adoptions.

However, removing the known breed of dogs relinquished by owners, or the probable breed or mix designated by the shelter staff, is not the only thing that will be withheld from adopters, according to Barnette.

Barnette emphasized that information on file with LA Animal Services provided by the prior owner or notes of concerns by shelter staff will NOT be shared with potential adopters choosing a canine companion or a family pet. However, it will be kept by LAAS for statistical reporting.

Los Angeles Dog-Bite Attorney Kenneth Phillips, a leading authority on this topic, advises, "A shelter that places dogs into the homes of families should know that the public expects only suitable dogs will be placed. Essentially an implied warranty of suitability arises from the very relationship between the public and the shelter. People have the right to expect either a suitable dog or at least a full disclosure."

On his website, he writes, "Sellers, rescue organizations, adoption agencies, shelters and dog owners, known as 'transferors,'  have certain legal obligations when they place a dog with a new owner. A breach of any of those obligations can result in civil liability or even criminal charges."

"Civil liability will result from adopting out a dog that is known to be dangerous, is known to have dangerous propensities, or is misrepresented as being safe when the transferor has no reasonable basis to make that representation," Attorney Phillips explains.

"A transferor may also be liable for breach of a promise, representation or warranty. A common problem is the transferor who says a dog is safe with children and other animals when, in fact, the transferor has no reasonable basis for making the assertion."

He also reminds shelters, rescuers, or anyone transferring ownership, "There can be criminal consequences if a dangerous dog seriously injures or kills someone in the new household."

ASSIGNING BREED ID IN SHELTERS IS AN 'IMPERFECT SCIENCE'

Mayor Garcetti’s newly appointed Commissioner Layne Dicker -- who has been brandishing an above-elbow ‘Best Friends’ tattoo while “touring” the shelters recently, according to employees -- contends that LAAS staff is inaccurate in its assessment of breeds and that the method used historically by employees (experience and a breed chart) is more "deceptive" than omitting it entirely. GM Brenda Barnette agrees.

Barnette has been the General Manager of LAAS since 2010 and has not mentioned any particular concerns about the breed identifications made by her staff at prior public meetings. If this is such a pervasive problem, shouldn’t Brenda have brought in trainers to improve their expertise?

One kennel employee said he recalls a breed identification refresher class about six to seven years ago. Several newer kennel Animal Care Technicians said that, other than their initial training, LAAS has not provided any further breed-ID instruction (easily available through the AKC and other on-line sources.)

Visual ID is an “imperfect science,” even when done by professionals. DNA testing is improving dramatically, but even that is not 100% accurate. Also, experts agree that neither "probable-breed ID" nor DNA are exact predictors of future behavior and can only point to breed propensities.

VISUAL ID IS MORE IMPORTANT IN SHELTERS THAN DNA

Lost pets that end up in shelters are identified by appearance, not DNA. So, although experts argue that visual identification of multi-breed dogs is unreliable, in the everyday world of animal sheltering, it plays an important role.

For example, if I have adopted/purchased a Basenji-Cocker Spaniel mix, who looks like a Labrador-Beagle cross (as cited by Victoria Yoith, DVM, in  CVC in San Diego Proceedings) that is how I will describe it--identifying it by the breed it “most appears” to be. I will not go into the shelter, hand them DNA test results and ask if they have "seen this dog.

Dogs over four months are automatically given a rabies vaccination by LA Animal Services' upon adoption, and a license is issued before they leave the shelter. Under the Commission proposal, it appears that while no breed designation would be available to adopters before payment, immediately after the shelter transfers ownership it would be disclosed for issuance of a license.

CAN LOS ANGELES RISK THIS EXPERIMENT?

By contrast to the intake numbers listed/approximated by the small agencies (below) which have dropped Breed ID, Los Angeles Animal Services' Intake of Dogs for fiscal year 2016-2017 was 25,000.

It appears from media reports that only a few smaller shelters have removed breed ID from kennel cards and postings and some only within the past year. In at least one case, breed ID is still provided on the shelter's website, and it is used on Petfinder. Another shelter manager stated all background information is available to adopters upon request.

(Note:  None of the following agencies indicate withholding known history.)

FOLLOWING ARE EXCERPTS FROM MEDIA REPORTS OR ON WEBSITES:

The shelter currently has 171 dogs in its care, compared to 163 dogs on this date last year. Shelter leaders say this is their slow time for adoptions.

Also in 2016, 239 dogs were returned to the shelter within 30 days of adoption for different reasons including behavioral issues, a living situation changed, not all members of the family agreed to the adoption, or the dog was “too big.”

About 40 percent of Rochester [NY] dog licenses issued in 2016 went to "mixed breed" animals, with terrier, Labrador retriever and shepherd mixes accounting for three of the next five most popular identified breeds.

Historically, intakes at Animal Services were approximately 6,000 cats and dogs annually…intakes have dropped below 4,000. (City of Rochester NY FAQS)

LYNDHURST, Va. (AP) - While the kennels are full with dogs at the Shenandoah Valley Animal Services Center, [which opened on Sept. 1, 2011] there are no pit bulls, hounds, beagles or shepherds. In fact, there are no breeds at all; SVASC has dropped using breed titles and started labeling each dog as an all American shelter dog.

Number of annual impounds not found, but  news article on Nov. 3, 2016, announces, "Dogs Gone? Valley animal shelter finds itself in a bind ...

Until recently, a search for adoptable dogs in Orange County's animal shelter led to a confounding conclusion: The shelter apparently was packed with pit-bull mixes of one kind or another. That has changed — officially at least — as the county has stopped formally identifying dogs by breed.

Indy Humane is the largest, private nonprofit shelter in Indiana and currently cares for about 315 puppies, kittens and adult dogs and cats (including those in foster care), taking in more than 3,000 animals a year.

Should a patron inquire about a dog's breed for an apartment rental or insurance policy, Indy Humane staff will be available to offer an educated guess.

Swaim said dogs will still have a breed listed online, just not at the shelter.

THE "INCONVENIENT TRUTH" ABOUT PIT BULLS

I asked Attorney Ken Phillips, who has been a frequent guest on CNN, NBC, CBS, ABC, MS-NBC and Fox News, and has been called "the dog bite king" (Today Show and Lawyers Weekly), to discuss pit bulls. Here is his candid response:

All pitbull owners will tell you that pitbulls are highly energetic and need a lot of exercise. They also need a lot of attention. To be fair to the dog, it's new family should know these things. So they need to know it's a pitbull.

All pitbull owners are aware that their dogs require keen supervision and restraint around other dogs…A pitbull's new family might already have a dog that they don't want harmed, and certainly won't want to endanger their friends' and neighbors' dogs. To be fair to everyone, a pitbull's new family should know these things. So they need to know it is a pitbull.

Everyone would agree that if a dog has a history of viciousness – not the breed, but that particular dog – a potential adopter needs to know it. When it comes to pitbulls, breed information is very important, too. Medical studies and municipal records have clearly established that pitbulls do the most biting, inflict the most damage on people, and are the dogs that kill people the most often. It is important to realize that 50% of the people killed by pitbulls are their owner, their owner's children, and their owner's parents.

I'm not saying that every pitbull will bite, or every pitbull is vicious…What I'm saying is that the risk of injury is higher around a pitbull. So a potential adopter needs to know it's a pitbull.

It's only fair to give the whole picture about anything we are selling or giving away. Soda cans and cereal boxes have a list of ingredients. Movies have ratings. We abhor propaganda, liars, and people who conceal the truth. The government should not hide important facts from people. A goodhearted person who wants a nice dog for her children or for himself is entitled to the real facts, the whole picture, the inconvenient truth – especially when it concerns the safety of their family and the well-being of their other pets.

HIDING INFORMATION FROM THE PUBLIC

I also asked Attorney Phillips what he believed will be/are the major potential legal issues in not identifying breeds (or at least providing possible-breed information) and/or not providing information given by the prior owner or negative behavior observed by staff?

He responded, "Not identifying the breed or giving the history of the dog constitutes fraud and concealment. A public official who suggests withholding information from citizens should be removed from office."

L.A. Animal Services has given no indication that it has performed even an informal survey to determine if animals were returned by adopters because of misleading breed ID. If a problem hasn't been identified, why is the Commission suddenly trying to fix it with a Best Friends program?

This appears to be very problematic for a major government agency, even if it is acceptable in small, private shelters. Here are just a few of many important issues:

It is likely in LA's busy world, that people will just go to another shelter after being put off by the fact that LAAS denies them access to known history and observed behavior of dogs, asking, "If there is nothing wrong with the dog, why is the City hiding information?"