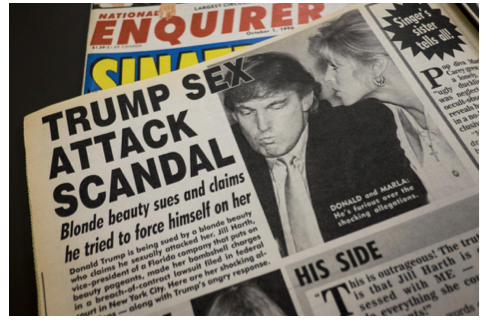 GUEST WORDS--“I am over the passivity of good men. Where the hell are you? You live with us, make love with us, father us, befriend us, brother us, get nurtured and mothered and eternally supported by us, so why aren’t you standing with us?”—Eve Ensler

Forget Harvey Weinstein. And Bill Cosby, and Bill O’Reilly, and Roger Ailes. But do remember the women. Remember all the women, famous and unknown, who have survived everything from catcalls to rape for as far back as well, forever.

The playwright and activist Eve Ensler is right to be past feeling impatient, to be so “over the passivity of good men.” She’s honed in on the question men have to answer: “Where the hell are you?” As of now, we’ve mostly been absent.

For decades, men who have never battered or raped would offer excuses for not standing up for women who faced harassment—and worse—offering this lame rationale: “I don’t engage in these behaviors, I’m a good guy, these are women’s issues, not mine.”

Those days are over. Sexual assault is not a women’s issue; it’s a community issue, and men, ready or not, we have to break our silence.

A half-century ago, women began dragging domestic and sexual violence from society’s shadows to center stage in the national—and international—conversation about gender-based violence and gender equality. From the beginning there were always some men who stood with them as allies, but not enough.

It was women who created rape crisis centers and shelters for domestic violence survivors. When men asked how they could help, women replied immediately, “Talk to other men. Tell them to stop beating us, raping us, killing us.” Some men responded, working with women to create batterer intervention programs and began grappling with some uncomfortable truths about their lives, including how they benefited from then-unfamiliar terms such as “privilege” and “entitlement.” It was the late 1970s, the era when the profeminist men’s movement began, in part sparked by a comment by Gloria Steinem: “Women want a men’s movement; we are literally dying for it.”

Ironically, the fall of so many powerful men—all brought on by their sexually assaultive behaviors—occurred in the same timeframe as the election of one of their high-powered brothers: Donald Trump, described by some as predator-in-chief.

As more and more brave women step forward to tell painful stories of having been sexually assaulted, and as they stand with and by other women, there’s a jarring simultaneous truth we cannot ignore: Trump has not yet fallen. He has yet to pay a price for his sexual assaults. More than a dozen women came forward to accuse him, detailing his assaults. He pledged to sue them all after the election but never has.

Harvey Weinstein’s fall may spark renewed investigations into Trump’s alleged sex crimes. In the aftermath of a tainted election in which his female opponent received three million more votes than he did, poetic justice would be meted out if, more than collusion with Russia during the election, more than revelations about potential tax return criminality, it is a sea of pussy hat-wearing women who bring down the president.

When Academy-award winner Jane Fonda (Photo left) spoke about Weinstein, she said, “Let’s not think this is some unique, horrific [incident]. This goes on all the time. It’s this male entitlement in Hollywood—and everywhere. In offices and businesses all over the world; in bars, and restaurants and stores, women are assaulted, abused, harassed and seen for just being sexual objects—there for a man’s desire, instead of as whole human beings.”

Trump’s election, Fonda believes, has contributed to undermining efforts to combat sexual assault. That he is president has emboldened some men, she says, counteracting “a lot of the good that we’re doing, because a lot of men [can now] say, ‘Well, our president does it, and he got elected even after people discovered that he was an abuser, so I’m just going to go ahead and do what I want to do.’” She added, “We have to stand up to them.”

The “we” she is referring to, guys includes men, all of us.

(Rob Okun is editor of Voice Male. A new edition of his book, Voice Male – The Untold Story of the Profeminist Men’s Movement will be published this month. This column is made available to CityWatch by PeaceVoice.)