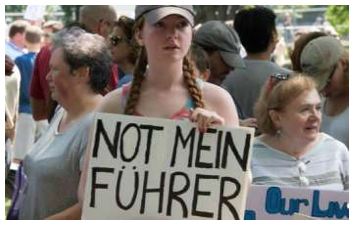 GUEST WORDS--Another week, another barrage of transgressions. There were the Nazis: After Charlottesville, when he "confirmed his place in the pantheon of those who believe institutional racism is something that made America great," the U.S. was one of just three countries to vote against an anti-Nazi resolution at the U.N.

There was Arpaio: Under cover of natural disaster, in another of his impotent "acts of spiteful erasure" and "cheap yet profoundly damaging acts of undoing," he not only pardoned the cruelest sheriff in America - a fellow  racist, sadist and sociopath who for years profiled and abused Latinos and kept inmates in pink underwear, spoiled food and sweltering tent prisons reaching 130 degrees, thereby driving 24% of them to suicide - but, it turns out, asked Sessions to drop his case altogether - a potentially impeachable offense.

In the midst of a catastrophic hurricane devastating thousands of lives, he bragged like an excited kid at the circus, with a pathological absence of empathy and using many exclamation points!, about the historic bigness of the event, the wonderfulness of the response, the margin of his electoral victory and his fucking wall. And he set the stage for an expected announcement Monday that local police - who he thinks are already way too nice to all the brown thugs who must be guilty if they're being arrested - will be able to go back to beefing up using tanks, armored vehicles and other military gear, just like in any good fascist state.

And it's only Monday. How to get through? In Vox Populi, poet Robert Okaji offers a sort of searing solace with Scarecrow Calls Out the Man. "How does one come to want/everything and nothing at the same time?" he asks. In the end, he warns, "Accept what the mirror sees/ and await karma....I name you/ Scourge, and laugh at the smallness of you."

Scarecrow Calls Out the Man

These things I cannot name: that finger of night

between fear and peace, in which darkness both cloaks

and hugs the wide-eyed. A snake, in the open. And that space

behind the watcher? Perhaps it is easier to call it something

else - a gasp, or the immeasurable measure. A presidential

folly. My friends, ever cautious, swoop in and away, taking

with them only those grains they need, unlike you. What use

is a hoarded larder if it rots? How does one come to want

everything and nothing at the same time? A gilded house

spotlights wealth, not right. Is this edifice your legacy,

your monument to self? The heart monitor's blip paints one

forever, your pursed lips, another. But even the concrete

you cringe behind lacks permanency; regard your hands

and all they can't stuff into your pockets. Loosen that

coiled tie lest it choke you. Accept what the mirror sees,

and await karma. Though you will not hear my voice,

I offer this: may the combined weight of your lies and

into one fist-size bankroll placed upon your chest, and

fueled by the gravitational forces of forty-four black holes,

slowly, with each turn of the earth's axis, press down and

down and down in search of that shriveled organ, and finding

it, pluck out and replace it with one resembling that of a

and humility. I am the sum of integrated, discarded

pieces assembled to observe and warn, collecting only

diminishment and the means to become less. Wanting

little, the world welcomes me. It arrives free, honest, on

wings, bringing wealth beyond your reach, your greed.

I own nothing. I know nothing. But this: I name you

Scourge, and laugh at the smallness of you. I name you

(Guest columnist Abby Zimet offers her insight daily at the popular Common Dreams … where this perspective was first posted.)