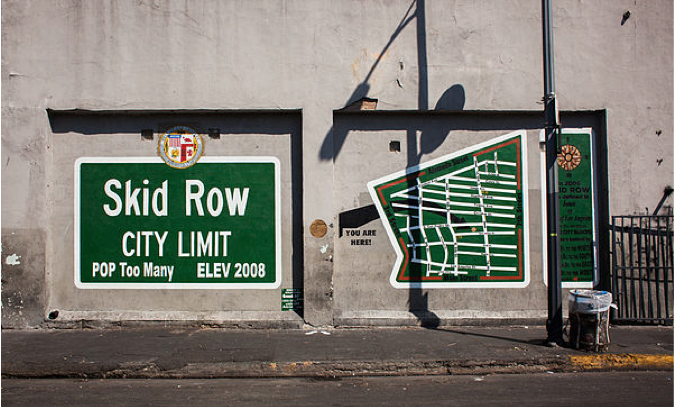 What’s wrong with this picture? Why is DONE allowed to even speak and put its finger on the scale? In spite of the unequal treatment, the Panel ruled for Skid Row on all three challenges, recommending the approval of a Skid Row Neighborhood Council or a new election. Subsequently, DONE, in a shocking but predictable ruling, tossed out the Panel’s recommendations stating “there was no factual basis to determine that…[they] would have made a difference in the final election results.” Say what? So the Panel’s conclusions mean nothing?

How is this possible, you ask? Answer: a flawed City ordinance. Ordinance No.183487, approved on March 20, 2015, established a process for resolving grievances by independent Regional Grievance Panels. Although this ordinance is not specific to election challenges, it has been used by DONE for the 2016 Neighborhood Council elections and this subdivision’s challenges.

Unfortunately, the Ordinance language affords DONE the right to ignore the Panel’s conclusions and recommendations. In other words, a clear message to neighborhood council volunteers for the Regional Panels: don’t waste your time!

If the purpose of the ordinance was to give total control to DONE, why even bother with the Regional Grievance Panels? Unless the ordinance is amended, this process is insulting to Neighborhood Councils and their ability to self-govern. Where are the checks and balances? And please don’t say BONC because all Commissioners are the Mayor’s appointees. And who does the General Manager of DONE report to? If you guessed the Mayor, you’d be right. So in essence, the Mayor wields as much, if not more, control over Neighborhood Councils as the City Council. It’s hard to believe that this is what the Charter intended.

Attention Neighborhood Councils: the Los Angeles City Council does not consider you part of the government. ARE YOU INSULTED YET?

And the beat goes on. Council File No. 17-0600-S82, although identified as an adopted Budget recommendation, it has nothing to do with the Budget. It recommends the postponement of the Neighborhood Council elections from 2018 to 2019 and to hold them in odd numbered years thereafter. When stakeholders went to the polls in 2016 to elect their Neighborhood Council members it was, in most cases, for two year terms. To change the rules after the fact is unfair.

Are they kidding? Council File No. 17-0600-S83 requests “…recommendations consistent with those requested by Motion (Krekorian-Huizar) Council File No. 15-1022-S2, including the budgetary impacts of the proposed Neighborhood Council online voting platform.” This does not come close to fulfilling the requirements of the Motion. Until there is an accounting of the costs associated with the 2016 election, no additional funds should be allocated for online voting. Online voting is still suspended by the Los Angeles City Council for Neighborhood Council elections. Or is the outcome preordained from on high?