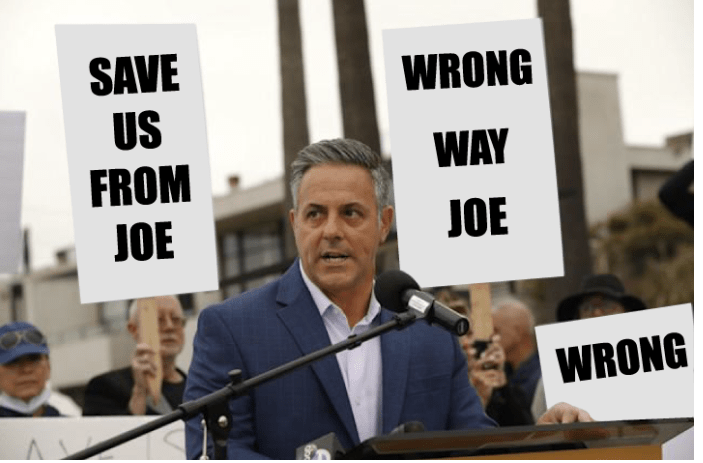 This is nothing new. Last time it was the anti-camping ordinance; the time before that, it was homeless “sweeps;” and before all of the hand-wringing over homelessness, he was responsible for the eviction of some 170 souls from Ken Malloy Park in Harbor City. Then he was shocked when these unhoused individuals began conspicuously camping in the public domain. Between then and now, Buscaino has disregarded the neighborhood councils’ advice, never seeking their support. Instead, he went on a gentrification spree using non-union labor and building less than mandatory affordable units.

Joe was a Johnny Come-Lately to the Bridge Home concept. And he only fell in line with the tiny homes solution when Mayor Eric Garcetti adopted the policy once the name was changed to “pallet homes” and placed at a distance far from his hometown of San Pedro. That there has been any movement policy-wise on more effective and quicker solutions addressing homelessness is due to Judge David O. Carter’s holding homeless hearings in council chambers at city hall. I have said it before and I’ll repeat it here for the hard of hearing, if ordinances could solve the homeless crisis, it would have been solved a long time ago!

Somehow, Buckets Buscaino, as he is known in the district, has convinced a majority of his city council colleagues to pass his latest political theater act over to his mayoral opponent, City Attorney Mike Feuer, to write up this bright idea in such a way that it’s not unconstitutional. The four dissenters, Mike Bonin, Nithya Raman, Marqueece Harris-Dawson and Curren Price, pointed out this needless act of grandstanding. Raman rightly pointed out that blocking any public right-of-way is already illegal as is bike theft, which is what Buckets seems bent on preventing. For all the effort, the proposed law would specifically target one class of people, expend scarce police resources better used elsewhere, while clogging already packed court dockets with quick catch-and-release misdemeanor cases. Does anyone see the problem with this scenario?

This manipulation of public policy toward political ends is reminiscent of Buscaino showing up on the Venice Boardwalk last summer and pointing out homelessness in Bonin’s district while announcing his mayoral campaign. It only serves him and doesn’t address the larger problem.

A better solution would be to set up bike repair shops at all of the shelters run by Lime Bike and others already littering our sidewalks with sanctioned Gen Z mobilizations. Here’s an opportunity to help the able-bodied and the willing to acquire a skillset and a means to help themselves get off the streets. Of course, a solution such as this is only viable if you are a believer in redemption. Something Buscaino clearly is not.

However, I do understand the frustration of many Angelenos. After a decade of promises and millions spent on promises, it seems like the solutions to the homeless crisis are as elusive as curing poverty in California itself. Are they not one and the same? What is needed are compassion and practicality, both of which seem to be missing in Buscaino’s approach.

First you have to meet the homeless crisis head-on with the facts — not fantasy. Homeless people are where they are for a multitude of reasons but the common denominator is that they are all just desperately poor. It is unsafe and unsanitary for them to live on the streets. So let’s confront this as a public health crisis rather than as a crime scene. Provide them with safe, secure and sanitary campsites out of the public right-of-way. Provide services in a centralized area away from neighborhoods and sort out the mentally ill from the drug addicted; and the disabled vets from the just down-on-their-luck people, and get them the help they need. Permanent housing, or institutional care can come later. Some may be saved from the scourge of poverty or addiction, some may not. But I cannot believe that this city with all its wealth can’t do better and take care of what amounts to less than one half of 1% of its residents.

This is not the civil society to which I belong, nor is it the one I know exists across this city. Think of the many hundreds of nonprofit organizations who, in their own ways, are a part of solving this humanitarian crisis. Buscaino’s anti-homeless measures are both counter to our culture and the current politics of this city. He may get some to follow him down this path of reckless disregard as he promotes his new “law and order” agenda, but it just mustn’t be the policy that ever gets him elected mayor!