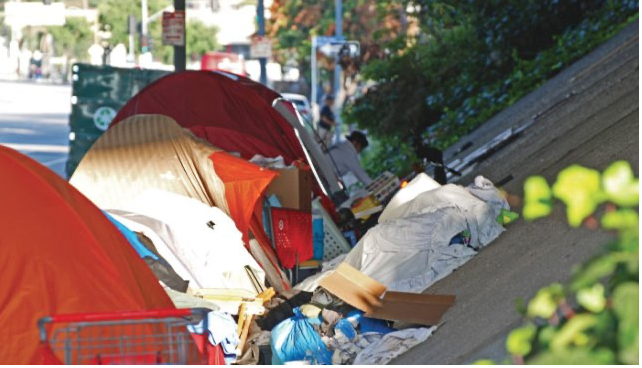 THE EASTSIDER - The City of Los Angeles’ Comprehensive Homeless Strategy was proudly announced back in 2016. You can find full information here.

Homelessness crosses all demographics, from age to race to gender and sexual orientation. As unique as each homeless person’s story is, standardizing a response to the issue and committing resources accordingly begins to address our homeless crisis. Basic needs of tens of thousands of homeless persons and families are not being met. Everyone has a role in responding to these needs.

The City of LA's Comprehensive Homeless Strategy adopted by the Los Angeles City Council on February 9, 2016, reflects the collaborative efforts of the City Council, its Homelessness and Poverty Committee, The Office of the Mayor, City Departments, the Los Angeles Homeless Services Authority, the County of Los Angeles, homeless service providers and the public. It is meant to be a comprehensive approach to address short- and long-term homelessness issues and is adopted in tandem with the Homeless Initiative approved concurrently by the County of Los Angeles Board of Supervisors.

The full strategy document can be downloaded from the City Clerk's website.

As of February 2022, here are the highlights of recent lows, at least for those of us living in Northeast LA, and I suspect the same is true for most of the rest of Los Angeles

- At the homeless encampment in Eagle Rock on Broadway by the freeway onramp, its “cleanup” providing some homeless going to Project Roomkey, was followed by homeless coming right back to the encampment.  And oh yes there was a spiffy fire at the encampment just to announce they’re back.

- In Highland Park, most of the homeless from the old encampment on Figueroa got a Kevin De Leon Tiny Village, only to have a large number of the them getting kicked out by their Hope of the Valley Provider. For the record, I reached out to Hope of the Valley using their suggested link, on December 24th of last year.

As of this writing, Hope of the Valley has never bothered to respond. Nor have they explained how the homeless they kicked out of the Tiny Village predictably wound up in their old encampment.  Or the new one that’s in CD1’s area..

- And in the biggest OMG of them all, LAHSA is spending a very large amount of money without making much of a dent in the homeless count.  Of course we don’t know that for sure, because their count has been delayed again :-)

The entity known as the Los Angeles Homeless Services Authority dates back to the early 90’s, which tells you how long LA City and County have been unsuccessful in trying to deal with the homeless. You know, the by product of  their sell-out to Developers. Here’s how the website describes their creation:

I’ve also included a link showing the City’s delegation of authority to and from the entity called the Los Angeles Homeless Services Authority, or LAHSA back in 2012.  It shows how the money flows back and forth, as if somebody doesn’t want ordinary citizens to be able to track the ins and outs.

Since looking at LAHSA was new to me, I tried to get someone to explain how LAHSA works.  So I used their media contact portal back on January 15th.  Just like Hope of the Valley (one of their providers), I’m still waiting for a reply. Like waiting for Godot.

In terms of who gets what we have $34 plus million for administrative, almost $524 million for “Subrecipient”,  and a bit over $33 million for “Direct Program”.

The second you try and get into the weeds of their budget, there is a wilderness of bureaucratic jargon.  So when you try and look up what Project Homekey is up to, here’s what you get:

“There are a total of 20 LAHSA-administered Project Homekey sites across Los Angeles County.

- 15 are currently active as interim housing, with a total of 1049 units

- 2 are preparing to open as interim housing

-3 are under construction to prepare to operate as Permanent Supportive Housing.”

If you find this unenlightening, so did I.

To help the research minded,  I have provided a link to the audited financial report for fiscal year 2019-20.  You can find it here.

You could also  look for document 5978-0128-22, which is the January 28, 2022 meeting agenda for the Los Angeles Homeless Services Authority Commission. The financials are linked to the agenda.

A convenient way of looking at LA City’s incomprehensible handling of the homeless explosion in the City of Angels, is to track Mayor Eric Garcetti’s tenure.

Remember, he served as Council President long before becoming Mayor. In fact he was initially elected to the old CD13 in 2001, later becoming  Council President from 2006-2012, and finally Mayor from 2013 until terming out at the end of this year.

After years of talk and no joy for the increasing homeless population in the City, Garcetti led the charge for Measure HHH, which turned out to be a giant bait and switch.  You can find my 2017 Citywatch article  here.

Two years after HHH passed, I wrote a follow up further demonstrating the failure of HHH. You can find that link here.

Now, of course, I realize that the big bucks have been buried in LAHSA.

Shifting of the Political Winds

This was pretty much the pattern until the homeless population exploded, and they starting putting up tents in cool places like Echo Park and Venice Beach. About that time the relatively affluent homeowners went nuts, as those very expensive homes they were buying suffered an invasion of the unhoused.

The City Council started to get a lot of flack from the homeowners and renters in their Districts.  They seemed to suddenly wake up to the fact that not only were they doing no good to the homeless, the people who actually go to the polls and vote were demanding that the elected officials do something to root out the homeless from the encampments they created.  Especially in nice places like Echo Park Lake, and Venice beach.

So the Council responded by criminalizing the unhoused, and used the police to do their dirty work. Here’s the link to the 2021 Ordinance.

“The Los Angeles City Council Wednesday approved an ordinance that would ban homeless encampments from certain areas of the city, including sidewalks.

It now goes to Mayor Eric Garcetti for final approval, and if signed, will go into effect 30 days later.

In a July 1 vote, the ordinance received support by a 13-2 margin from the city council. However, it required unanimous approval to pass on its first go-around. Councilman Mike Bonin and Councilwoman Nithya Raman were the two dissenters.

The ordinance bans encampments on sidewalks and driveways, freeway overpasses and on-ramps, and near libraries, parks, schools and homeless shelters.

It specifically bans homeless encampments from within 500 feet of a “sensitive” facility, such as schools, daycare facilities, parks and libraries.”

This is really a snapshot of LA’s attempts to deal with rampant homelessness, as of early 2022.

Regarding the success of our governmental agencies, both City and County, to manage or improve homelessness, clearly we are failing.  In my attempts to follow the money, a good case can be made that the real beneficiaries of over 1/2  a billion dollars is in fact the bureaucracy, such as the Providers and the Contractors that LAHSA funds.  The homeless themselves are still out there in record numbers, with the City Council deciding to demonize them with their draconian Municipal Code sweeping them off the streets with no real solutions in sight.

It is also not reassuring that the public agencies and those they fund will not come out and respond to questions regarding how they work and how the system spends our taxpayer money. Of course I’d still love to talk to them.

Politically, its important since this is a big year for elections, including the 1st and 3rd Districts of the LA County Board of Supervisors, as well as over half of the City of Los Angles politicos, including the Mayor.

It would be nice to see any of them come up with a realistic plan to help those unfortunate enough to wind up living on our streets.