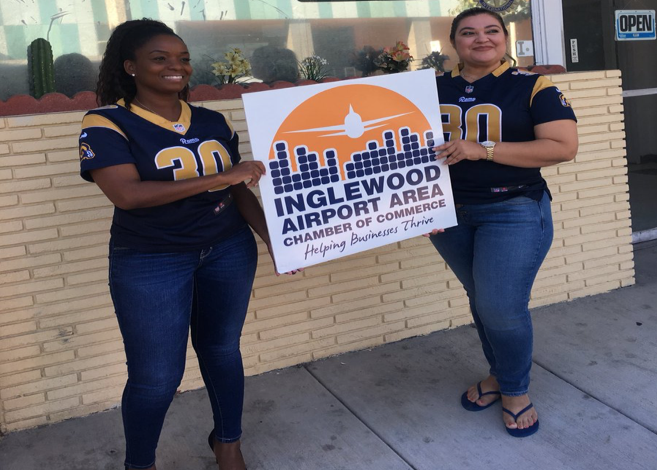 NEIGHBORHOOD POLITICS--Inglewood Airport Area Chamber of Commerce (IAACC) will host Women Business Leaders Champions of Change on June 13, 2019. The event will honor a couple of business owners and two municipal employees. Why is IAACC hosting so many events, charging thousands to potential sponsors and more importantly, who is really benefiting financially from their costly events?

Cinder Eller-Kimbell works for the Inglewood Police Department, as a civilian, in the Community Affairs department. She was gifted a 2018 Black Chevy Tahoe, identical to the one driven by Mayor James Butts, to assist with the homeless issue in the city. A review of city records show that 2018 Chevy Tahoes purchased between 2016 and 2018 have all been outfitted with “Code 3” lights for IPD officers to use in cases of emergency.

2UrbanGirls has submitted public records requests to determine how much was spent for Black and White Emergency Vehicles to outfit the departments fleet of Black 2018 Chevy Tahoes.

Mari Morales runs One For All, a nonprofit based out of her home that supports back to school drives for Inglewood Council District 2 area students. After heavily supporting Councilman Alex Padilla’s two campaigns, she was hired by Republic Services as the city residents liaison for trash issues. One could assume she has access to confidential information, related to all Inglewood residents, which includes their phone numbers and email addresses. Morales is regularly present at every event featuring members of the city council.

Trena Thompson Lawson is an administrator for Children of Promise Charter School (COPCS), in Inglewood Council District 4. The charter school was featured in a 2016 LA Times article titled “Can Inglewood’s NFL-fueled turnaround be a success if its schools are failing?” They cited COPCS as a failure.

Although Animo brought up the overall test scores for charters, the full picture of education in Inglewood remains bleak. Among the worst examples, only 1%, of students at Morningside High, a traditional public school, and at Children of Promise Preparatory Academy, an elementary charter school, met state standards for math.

Mayor Butts assists the troubled school by hosting fundraisers where Murphy’s Bowl/LA Clippers are generous supporters. In turn, Lawson is listed as a supporter of the arena on the Murphy’s Bowl funded InglewoodForward.com website.

School insider share with 2UrbanGirls the students have yet to meet state targets for reading and math.

Assistant Fire Chief Eleni Pappas is most likely tasked with ensuring the various city projects are “up to code” and don’t raise any flags for non-compliance. A 2UrbanGirls investigation revealed the LA County Fire Department regularly looks the other way where Mayor Butts campaigns donors are concerned.

2UrbanGirls ponders why long-time Inglewood businesswomen like Pearlean Rocket, owner of Crenshaw Imperial Car Wash or Connie Cossio, owner of Coni’Seafood aren’t being honored for their decades of service to the Inglewood community. It appears that the only people worthy of being honored are those somehow tied to favors for the mayor.

Former IAACC chamber board members have shared that Executive Director Erick Holly has unscrupulous ways that involve misappropriation of funds. One particular instance being a deposit for the chambers annual state of the city.

Related: Chamber No Longer in Charge of Anaheim’s State of the City Address

Past board members commented on the article below and raised community members eyebrows over their assertions of Holly’s alleged fiduciary antics.

Former board members expressed their frustrations of Holly’s misappropriating chamber funds, directly to Mayor Butts in a meeting at City Hall, after they fired Holly only to have Butts insist they rehire him.

Related: Letter to the Editor: Inglewood Mayor threatens Board of the Inglewood Airport Area Chamber of Commerce

It would be a shame if Holly is accepting donations from businesses, seeking to do business in Inglewood, and somehow funneling that money to the hands of members of the Inglewood City Council.

That sounds a little far fetched or does it?