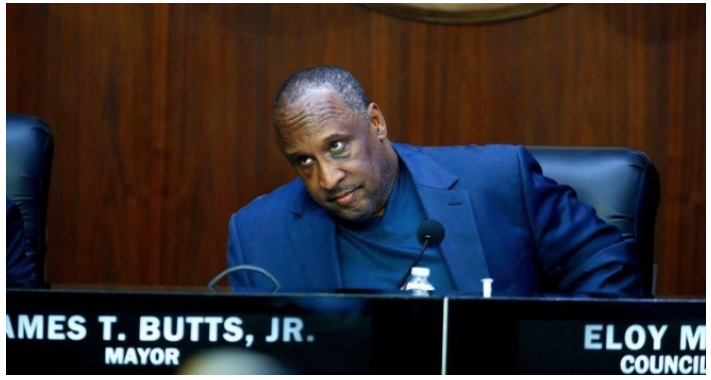 Over the holiday weekend residents of an apartment complex, located at 99th Street and Prairie Ave, took to social media to put their property management company, Malin Asset Management on BLAST for raising their rent $1500. Allegedly, the rent on their two-bedroom apartments increased from $1200 to $2725 come March 1st. Is this a tactic to rid the apartment of undesirable tenants or the anticipation of Stan Kroenke’s stadium 2020 opening across the street?

Never missing an opportunity to promote himself, Mayor Butts promised a “swift and certain” response in the event he verified the increase to be authentic. Whatever that thinly veiled threat means.

2UrbanGirls spoke with “Karen” from Malin Asset Management who confirmed Adrian Malin is still the owner but wouldn’t confirm the number of apartments owned in Inglewood nor if the rent increase was accurate. 2UrbanGirls has consistently reported on rent increases in Inglewood since April 2016.

The Mayor has had AMPLE opportunity to show his support to Inglewood residents facing huge increases, some of which are city of Inglewood employees.

Third, he could ensure the Housing Commission actually meets so residents could share their concerns and work towards better helping the city understand their needs on a regular basis and finally, Mayor Butts could have publicly supported the rent control petition that circulated. Instead, it is alleged, he called businesses to keep the petitioners from accessing their property to collect signatures.

Mayor Butts is a disgrace to the seat of mayor and based on his record of shady real estate deals with city contractors, getting family members jobs with city contractors, exorbitant salaries to city employees he has alleged personal relations with, shredding documents and wasting taxpayers money suing residents, it is time for Inglewood residents to WAKE THE FUCK UP AND RECALL HIS ASS IMMEDIATELY.