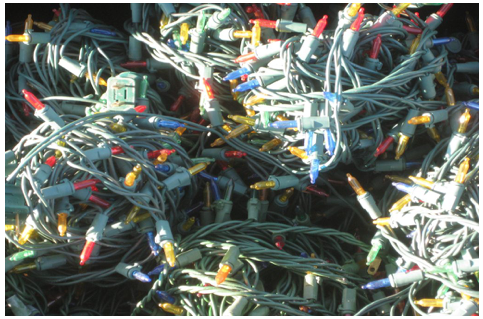 NEIGHBORHOOD POLITICS--Wells Fargo & Company has decided to evict a popular tree-lighting festival from the parking lot of one of its branches, a move coming at a time when the bank is working to rebuild its image in the aftermath of a scandal involving the opening of accounts for millions of customers without their permission.

The company’s decision riled neighbors so much that they collected almost a thousand signatures on petitions, as well as letters from children, before assembling outside the bank with handmade signs and kids in strollers. 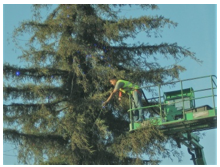 Video footage of the November 9 demonstration at the Atwater Village branch shows bank security forcefully shutting the door on protesters. “It just makes no sense,” said community resident Bahar Tolou. A bank of Wells Fargo’s size and influence, she explained, “could figure out some way” to work with the local community and “have this sweet little event that happens for two hours once a year.” The Tree Lighting Festival, which attracted about 1,300 people last year, typically features Santa Claus, fire trucks, children’s activities and local dancers and musicians.

Wells Fargo released a statement Monday underscoring its work to help the group find another site and its commitment to Atwater Village, where the bank has “been a long-standing community partner” and has “actively supported the tree lighting event.”

But the bank stood by its decision to discontinue hosting a gathering that it says was becoming a safety hazard. It “violates our parking lot’s legal capacity limit, closes our business to our customers, and places our customers’ and the community’s safety at risk,” its statement said.

Shelli-Anne Couch, a festival organizer, said the group had offered to hold the event on a weekend so it would not interfere with bank business.

“Had we known back in August, if they’d been forthright and just honest about not using this space, we would have had ample time to shift the event,” Couch said. “But they kept dragging us along. We were left scrambling.”

As Couch spoke, a worker in a cherry picker strung lights around the festival’s focal point, a dusty and towering evergreen that sprouts from a median strip on Glendale Boulevard. The bank parking lot is ideally situated to allow residents a space to gaze at the lit tree from across the street, she said. 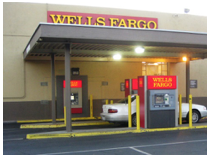 Residents’ frustrations also stem from the fact that bank officials offered shifting explanations for why its parking lot could not accommodate the tree-lighting ceremony after organizers met with the company in August, Couch said.

When event organizers proposed moving the tree lighting to the weekend so it would not interfere with customer traffic through the ATM lane, bank officials said the all-volunteer group needed to buy a $5 million liability insurance policy, organizer Courtney Morris said.

“We told them that we would try to secure a sponsor to pay for it, but could not in fact buy the insurance before we even knew if the branch would host,” Morris said. “They seemed to want us to put the cart before the horse.”

Luanna Lindsey, the banking district manager, who has reportedly led ongoing talks with community members, declined to comment for this story. Councilman Mitch O’Farrell’s office did not respond to a request for comment.

As of Monday, the plan was to hold the tree lighting festival on December 10, from 5 to 7 p.m., on the lot of All’Aqua, an Italian restaurant located next door to the Wells Fargo branch. Its parking lot is a fraction of the size of the original spot, and so organizers had hoped to secure permission to close Glendale Boulevard, a potentially costly move that will be hard to accomplish on short notice.

Wells Fargo, which spent $281 million on corporate philanthropy in 2016, is choosing to curtail this event when it is seeking to generate goodwill in the communities it serves. Wells Fargo revealed in August that it may have created as many as 3.5 million deposit and credit card accounts without customers’ permission over the last eight years. In July, the U.S. District Court in San Francisco approved a $142 million settlement in a class action lawsuit brought over the unauthorized accounts.

Some Wells Fargo critics have speculated that the bank is punishing City Councilman O’Farrell, who represents Atwater Village. O’Farrell filed a motion in March requesting that the city explore options to divest its $40 million holdings from the bank. Wells Fargo’s contract for providing banking services to the City of Los Angeles is coming up for renewal in June 2018. The motion cites the city’s 2015 lawsuit over the sham accounts, which was settled for $50 million in civil penalties, and the bank’s financial support of the controversial Dakota Access Pipeline running through a sacred Native American burial ground and the tribe’s water source.

“Any allegation that our decision is related to any specific activity by any member of the L.A. City Council is false,” the bank said in Monday’s statement.

Last spring, the LA Griffith Park Lions Club, which sponsors an annual pancake breakfast, was asked to increase its liability insurance from $1 million $5 million, at an increased cost to the club of $2,700, according Louis Buono, the club’s vice president.

“I just think the property management people don’t want the liability, not that anybody has ever gotten hurt,” Buono said.

James Haydu, executive director of SEE-LA, said he began having conversations with the bank more than a year ago about the need to find another space for an event that has grown over the past dozen years. The Farmers Market, he said, has known “we would outgrow that space.”

The events Wells Fargo hosted at its Atwater Village branch fostered a small-town feeling that can help neighborhoods cohere in a vast metropolis that can often feel isolating, supporters said. “It is a splendid event,” resident Tricia Russo wrote on Facebook.

This year, Couch jumped up from a parking lot wall where she had been sitting and pointed to the tree. “Look,” she said, “they are doing color this year.”

It was just after 4 p.m. and the tree’s newly-installed lights were beginning to glow. “I want to get a shot of that,” she said before snapping a picture of the tree.