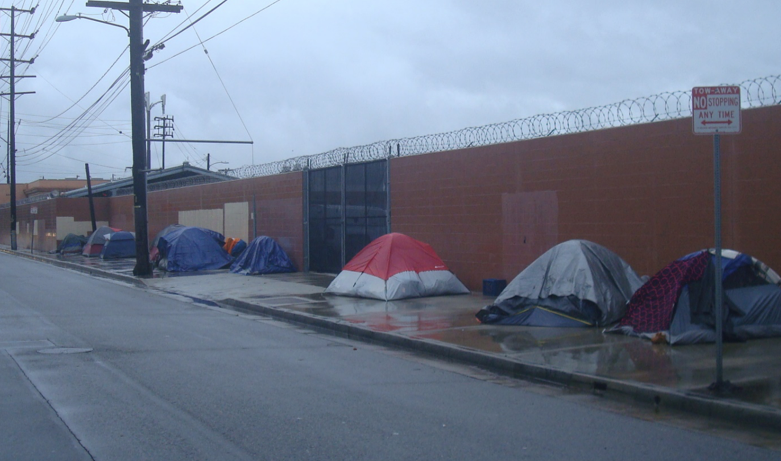 EIGHT MOST READ - PERSPECTIVE-In April of this year, the Los Angeles City Council declared an emergency shelter crisis, and Mayor Eric Garcetti followed up by announcing “A Bridge Home,” a new initiative intended to fast-track the construction of temporary homeless shelters.

The Mayor has set aside $20 million from his 2018-19 Budget for this program, and the funds will be available to all 15 Council Districts. To access the funds, Councilmembers "must identify a site or building adjacent to a high-density homeless population and create an emergency shelter."

Given the scope of the homeless crisis in LA, this may sound like welcome news, but the program has already run into problems. The rollout of A Bridge Home hit a nasty snag when Councilmember Herb Wesson unilaterally selected a City-owned parking lot near Vermont and Wilshire, in the heart of Koreatown, as the site for a temporary shelter in his district. Wesson's move was obviously meant to show his commitment to the Mayor's plan, but by taking this step without consulting any local leaders he sparked a wave of outrage in the Korean-American community. Protests were held, and the list of speakers included representatives from East LA and South LA neighborhoods who spoke of their concern that City Hall was pushing the program forward without adequate input from communities.

Early in June Garcetti managed to make things even worse. The Mayor's Office of Public Engagement organized a two-part Homeless Solutions Workshop on June 5 and June 11. Publicly posted announcements billed the workshop as "a convening of community advocates, congregants, lay leaders and clergy to develop a strong foundation for homeless service partnership, sharing comprehensive education, resources and best practices." Members of the Korean American community RSVPed for the event, but on arriving they were barred from entering by a security officer, who showed the group a Post-It note with their names on it.

Korean media asked for an explanation. The Mayor’s Office responded with this statement: “The Mayor's Organizing team held an invite-only meeting sponsored by the Jewish Federation to educate religious leaders on the Westside of Los Angeles about the Mayor's homelessness strategies. The June 11 meeting is also specific to invited residents of the Westside.” But the announcement that was widely available on the web says nothing about invitations. In fact, the posted flyer says, "Enlist other members of your community or congregation to join you as a team."

There are a few questions we could ask here, like, why is an event intended only for Westsiders being held in Mid-Wilshire? An even better question would be, if participation is limited to Westside residents, why aren't the Councilmembers who represent that area holding this event? Why is the Mayor, who is supposed to represent the entire City, organizing an event for one community? And since the information presented at the event was supposed to educate people about dealing with the homeless population, shouldn't that information be available to all communities?

The Korean American Coalition sent a letter to the Mayor demanding an explanation, and they're not alone on this issue. The letter was also signed by representatives of the NAACP, the Unification of Disabled Latin Americans, Asian Americans Advancing Justice - LA, the Anti-Defamation League - Pacific Southwest, and the Asian Pacific Policy & Planning Council.

Garcetti's and Wesson's arrogant and insensitive actions are troubling in themselves, but a closer look at the Mayor's A Bridge Home initiative reveals that it's deeply flawed on many levels. While being billed as an emergency effort to fight homelessness, it seems more like a public relations move designed to make it look like the City is taking decisive action after years of neglect.

Let's go back to the proposal's basics. The Mayor's budget sets aside $20 million for temporary shelters that will theoretically be divided between the 15 Council Districts. This means the Mayor is offering each District about $1.3 million to incentivize the construction of temporary shelters, with the provision that the site selected must be adjacent to a high-density homeless population. But without any real framework to guide the process, Councilmembers are basically left to figure it out on their own, and the results are bound to be uneven.

On the one hand, you have Paul Krekorian, who has said he'll study eight different sites and has pledged to meet with his constituents before deciding. Seems like a reasonable approach, which is likely to earn the community support necessary for this effort to succeed. On the other hand, you have Herb Wesson, who immediately blew any possibility for meaningful community engagement by choosing a site without any public outreach.

There are other possible pitfalls. How well-equipped are the various Councilmembers to make good decisions when it comes to implementing this program? Mitch O'Farrell has chosen an unusual approach. He's asked the City to study the feasibility of using a parking lot at 1533 Schrader, in the heart of Hollywood, for a temporary shelter. This is an interesting choice for several reasons. First, Central Hollywood probably has the highest alcohol density of any area in the City. On top of that, LAPD stats show that drug arrests there are way higher than the citywide average.

You have to wonder if this site would be appropriate for any homeless individual dealing with substance abuse issues. Also, with the Hollywood Division reporting 578 violent crimes so far this year (a 16% increase over 2017), Hollywood has a much higher crime rate than most of LA's communities. Does O'Farrell see any risks to the safety of the homeless men and women who might inhabit this site? And since City Hall has been working hard to build the party scene in Hollywood, it can be noisy and chaotic at night, especially on weekends. Maybe not the best environment for people trying to pull their lives together.

There's also the question of exactly who these shelters will be serving. It's not like the encampments we see on the street are made up of standard, generic homeless people who just need a roof over their head. Shelters are designed and staffed for specific homeless populations, like veterans, battered women, people with substance abuse issues, or the mentally ill, to name just a few.

When I asked Wesson's office about how candidates for the shelter would be selected, I was told that, "The city is partnering with Los Angeles Homeless Services Authority (LAHSA) to recruit homeless individuals living on the streets in Koreatown." That's interesting. LAHSA's mission is to help the homeless countywide, and they have a comprehensive system in place that handles referrals for people needing shelter, but I was surprised to hear they were going to "recruit" homeless folks in Koreatown for a shelter in Koreatown. Generally, LAHSA's process is much more sophisticated and involves matching the needs of the homeless individual to the housing and services that will be most beneficial. I wanted to know more about the criteria for referring candidates to shelters under the Mayor's program, so I contacted LAHSA with a few questions. I was told that, "the Mayor's Office would be most appropriate to answer them."

There are still more problems with Garcetti's approach, one of the biggest being his tactic for encouraging communities to accept the shelters. The Mayor's website says, "Once Council Districts stand up their shelters and homeless Angelenos move into them, the City’s Sanitation department will work to restore spaces that were previously encampment sites into safe, clean, public passageways. These extra resources will only be available to Districts that stand up shelters." In other words, the City will get rid of any remaining homeless individuals in the neighborhood.

For communities that have been dealing with the impacts of encampments, this may seem tempting, but it's not a solution. The temporary shelters will house only a small percentage of the homeless population in any given area. The rest of the people still living on the streets will simply be shunted off to a different neighborhood. Really, this is just a continuation of what City Hall has been doing for years, pushing the homeless from one place to the other.

No one can deny that LA is in the middle of a homelessness crisis. We all want a solution, and certainly no one wants that more than the homeless men and women who are living on the city's streets. Voters showed they were willing to pitch in when they approved Measure HHH to build permanent supportive housing and Measure H to pay for support services. But this problem was years in the making, and it will be years before we see substantial progress.

The promise of a quick fix is always appealing, but a real solution is going to require careful planning and thoughtful execution. Instead, the Mayor gives us a poorly conceived initiative that's nothing more than a vague outline, leaving the Councilmembers to figure out the details. This isn't a plan, it's a public relations move. Garcetti knows that the rapid growth of the homeless population during his first term is making him look bad, and he wants to create the perception that he's taking action. But what we need is meaningful action.

Garcetti's aggressive approach to pushing A Bridge Home is like something you'd see on a late-night infomercial. By offering $1.3 million to Councilmembers who buy in -- and telling communities they have to climb on board if they want encampments cleaned up -- the Mayor is acting like a pitchman pressuring customers to make a sale. But is A Bridge Home a product you really want to buy? Or is it just a flashy package with nothing useful inside?

(Casey Maddren is President of United Neighborhoods for Los Angeles (UN4LA [www.un4la.com]), a grass roots group advocating for better planning and a CityWatch contributor.) Edited for CityWatch by Linda Abrams.