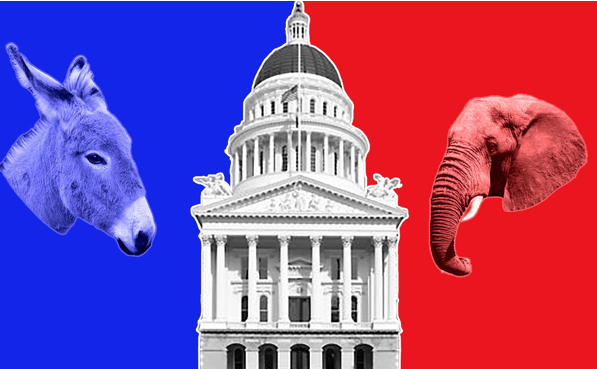 CAL BUZZ ON POLITICS--(Ed Note: Jerry Roberts spends most of his energy these days wrangling horses and politicos in Santa Barbara, where he is the RW Apple of hyper-local concerns. Occasionally he lifts his sights beyond Santa Maria to offer his thoughts on the state at large. This is from a recent post on the Santa Barbara Independent.)

… Around California there are a host of campaigns and contests whose outcomes will reverberate throughout the state and across the nation. It starts with the paramount political question of 2018: Can Democrats snatch early defeat from the jaws of victory in their momentous bid to win the House of Representatives in November?

In the general election, Democrats must flip at least 24 House seats now in the GOP column in order to fracture Republican hegemony in Washington. Essential to their calculus is California, where Dems need to capture at least seven Republican seats ​— ​most in Orange County and the Central Valley, where Hillary Clinton beat Donald Trump in 2016 ​— ​to find a viable path to national victory in the fall.

However, anti-Trump enthusiasm on the left has clogged the ballot in several contests with a surfeit of Democrats, setting up a scenario under California’s open primary system in which Democratic contenders may splinter the liberal vote, paving the way for a one-two Republican finish in June and hence an all-GOPrunoff in November.

Case in point: In Orange County, embattled Rep. Dana Rohrabacher, aka “Putin’s favorite congressman,” had been seen as a strong favorite to lose his seat to a Democrat ​— ​until widely known GOP former assemblymember Scott Baugh recently jumped into the race. With six ​— ​six, count ’em, six ​— ​Democrats running, each of whom has raised more than $100,000, it’s easy to see Rohrabacher and Baugh finishing 1-2, freezing the Dems out of the general election runoff.

With less than 50 days until the election, here are a few other big questions framing the primary:

Can immigration outrage save the Reps? To date, there is considerably more partisan enthusiasm among Democrats about the midterms, fueled by resistance and loathing toward Trump. In recent weeks, however, GOP leaders have found an issue that may galvanize their voters: A series of conservative local governments, most prominently the Orange County Board of Supervisors, have joined Trump Attorney General Jeff Sessions in his lawsuit challenging California’s “sanctuary state” law, which limits the cooperation law enforcement here extends to federal immigration authorities. Republican campaign operatives hope the anti-Sacramento Democrat action will give their voters a rallying cry and a reason to turn out in the primary.

Can Netflix save Antonio? The trick for Antonio Villaraigosa in the race to succeed Governor Jerry Brown is to place second on June 5,

amid widespread expectations that Lieutenant Governor Gavin Newsom, who’s way ahead in fundraising and has been campaigning for three years, will finish first. However, the former L.A. mayor in recent polls has slipped into third place, behind Republican John Cox, who is consolidating GOP votes. Then last week, Villaraigosa received a huge boost from Netflix chair Reed Hastings, who donated $7 million to an independent expenditure group backing him. Hastings likes Villaraigosa because of the latter’s record of support for charter schools; if the money helps put him in the runoff, education will be a central issue, because Newsom enjoys the full-bore support of the anti-charter California Teachers Association.

Is there a future for independents? Although No Party Preference independents by far are the fastest growing portion of the California electorate, no candidate outside the two major parties has ever come close to winning a statewide race. Now that could change, as former insurance commissioner Steve Poizner, who served in the aughts, is campaigning for his old job ​— ​running as an independent. A Silicon Valley zillionaire, Poizner made a fortune on GPS technology; after losing a bitter primary race for governor to Meg Whitman in 2010, he would win national attention by finishing in the top two in a campaign that features two Democratic wannabes.

(Jerry Robertsis a California journalist who writes, blogs and hosts a TV talk show about politics, policy and media. He is co founder of CalBuzz … where this piece was most recently posted.)