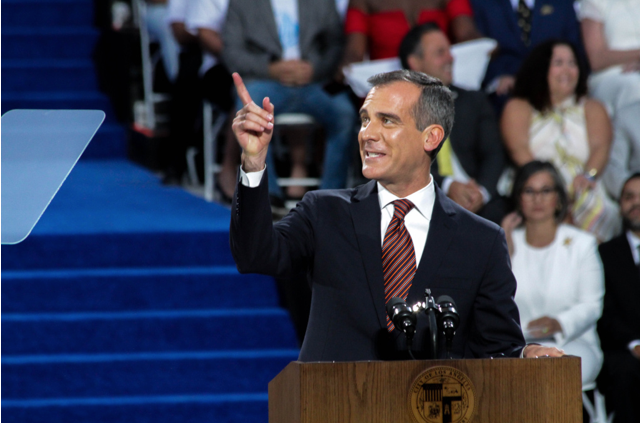 ALPERN AT LARGE--To many of us who remembered the dream of more responsive Los Angeles city government with respect to transportation and planning, and who remember the push for Neighborhood Councils and Neighborhood Plans, the year 2016 is part of an interesting turning point with respect to how Mayor Eric Garcetti and other City Hall officials chose to work with their citizens.

"Bait and Switch" isn't anything new in the world of business or politics, but inasmuch as our Mayor is turning to presidential politics, and inasmuch as certain City Councilmembers are eyeing his position as his successor, it's worthy to note that the City's role in Metro leadership and on issues ranging from sustainable Planning to the Homeless and Affordable Housing crises have CHANGED.

And CHANGED for the worse.  Decidedly so.  Dangerously so, even.

BEFORE 2016:Things are again getting interesting in the world of transportation, and in large part due to visionary, consensus-oriented and regional efforts started in part by grassroots groups such as Friends4Expo Transit, The Transit Coalition, and Friends of the Green Line.

There were no shortage of Neighborhood Councils and other, non-City neighborhood associations who wanted another way to get around, and the arguments of buses vs. rail became moot as fringe organizations such as the Busriders Union became less important than the citizenry in general...who wanted better buses, AND better rail.

Major City transportation leaders like Eric Garcetti and Mike Bonin finished their predecessors' efforts to bring Metro Rail and mass transit to LAX, and are doing so with the LAX People Mover concept once started in the 1980's-90's.

The Green/Crenshaw Line connection to the LAX People Mover to the individual airline terminals, ground and Metro stations and a new, consolidated rental car terminal is huge (LINK: , and is more akin to other airports throughout the nation and world.

Other regions from the San Fernando Valley and throughout L.A. County are focusing on city, county, state, and federal funding to offer opportunities to improve transportation, mobility and the environment, and this regional approach was a hallmark of Garcetti's approach.

AFTER 2016:While our erstwhile Mayor is off campaigning for a future 2020 run for the White House in Iowa and South Carolina, he is showcasing how much of a bully he is, despite being a smilling, and affable bully.

1) Garcetti is doubling down on a misleading, poorly-implemented, and potentially dangerous VisionZero effort that is based on lousy science, lousy presumptions, and a lousy narrative that somehow Angelenos don't care or do enough for pedestrians and bicyclists.

This is the same City that voted for more pedestrian/bicyclist/transit funding with not just one but at least four county tax initiatives over the past few decades, and is hardly a City that disparages the need for safety and alternative forms of transportation for ALL who want to get from Point A to Point B.

2) Yet as safety issues on Metro buses and rail lines were ignored (or at least not addressed sufficiently) out of political correctness, Angelenos of all ethnicities and socioeconomic backgrounds are buying cars, using cars, and embracing Uber/Lyft instead of bus mass transit ... even when Uber/Lyft is used to take commuters to the Expo Line or other major rail lines.

With respect to zoning, planning, misuse of transportation and related funding, Garcetti and his City Council allies have proven themselves to be as guilty of "Scofflaw Behavior" as Wiener and his creepy, self-absorbed, self-enriching allies.

In other words, Wiener didn't lose in Sacramento because he failed to bring Los Angeles on board, as some have claimed.

Wiener lost, and if Angelenos had the chance they would also make Garcetti also lose, because Garcetti is as guilty as Villaraigosa, Newsom, and Wiener of falling into the "Progressive" camp of Big, Bullying, Big Development that has nothing to do with addressing the plight of the middle class, the homeless and business development in California ...

... and everything to do with enriching a few at the expense of the overwhelming majority of Angelenos and other Californians.

4) Goodbye, JFK Democrats, and hello to a perpetual rule of "Progressives" who want CONTROL and force everyone into beehive complexes that are incompatible with families (LINK: ).

So we now have a post-2016 era where the City of Los Angeles has a notorious reputation of stepping on their citizenry, rather than empowering their citizenry, and Garcetti is as much at the center of this reputation as his City Council allies (who damn well know who they are).

It is doubtful that there is much that can be done before 2020 with respect to fixing this reputation, and it is also uncertain that Angelenos will vote for more reformers and grassroots-enablers like David Ryu, who is probably the only current member of the City Council who has earned the trust and love of his constituents as the late Bill Rosendahl (who also bucked the system).

Until then, the respect of Angeleno leaders (and NOT just a few screaming activists who have more time, and perhaps more money, than the rest of us with day-jobs and family obligations) will remain on life support.

And we can only hope that there will be a new, and better, and more representative, generation of City leaders who will harken back to the era of grassroots cooperation and consensus that once offered hope to the majority of Angelenos.

All this while Garcetti postures, proclaims, and prances around as if to suggest that the era of such cooperation and consensus still exists. But, as the Wiener bill crash demonstrates, Angelenos know a bully when they see one.

(Kenneth S. Alpern, M.D. is a dermatologist who has served in clinics in Los Angeles, Orange, and Riverside Counties, and is a proud father and husband to two cherished children and a wonderful wife. He is also a Westside Village Zone Director and Board member of the Mar Vista Community Council (MVCC), previously co-chaired its Planning and Outreach Committees, and currently is Co-Chair of its MVCC Transportation/Infrastructure Committee. He was co-chair of the CD11 Transportation Advisory Committee and chaired the nonprofit Transit Coalition and can be reached at [email protected]. He also co-chairs the grassroots Friends of the Green Line at www.fogl.us. The views expressed in this article are solely those of Dr. Alpern.)