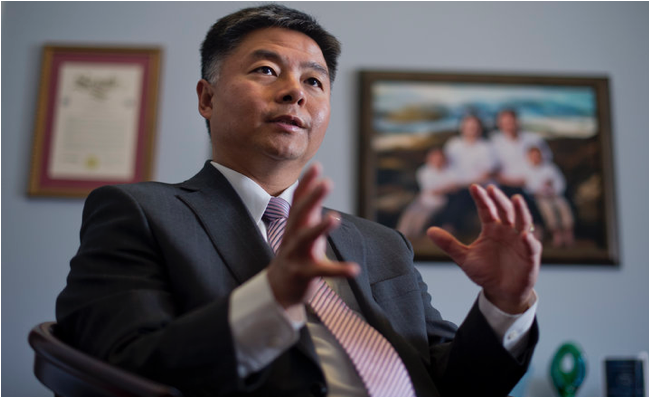 D.C. DISPATCH-Taking over Henry Waxman’s job is no easy undertaking.

With 40 years as a Congressman and as one of the most powerful members of his day, Waxman’s departure created quite a void in 2015. However, since assuming CA-33’s congressional seat from Waxman, Congressman Ted Lieu has done just that. He has managed to cement his reputation as one of the most powerful and influential Democrats in Congress. As a formidable leader of the Resistance movement, Mr. Lieu had made blocking the Trump agenda and advocating for his constituents his top priorities.

Though Representative Nunes may have shut down the House investigation against the wishes of many Democrats, Lieu continues to offer on air perspective on The Mueller Investigation & multiple scandals that seem to engulf this current Presidency. In his short 3 years in office Lieu stands to supersede the legacy of Waxman. Forthcoming are excerpts from our interview in April 2018:

It has been widely discussed in the media that Trump is not the target of a criminal investigation but a subject. Can you envision any scenarios where a subject could become a target?

There are basically three classifications: witness, subject and target. A witness is someone who has relevant information. A subject is someone who engaged in conduct that is under investigation. A target is someone that the grand jury has substantial evidence linking him to a crime. The Washington Postreported that Special Counsel Mueller told President Trump’s attorneys in March that he was investigating the president but did not consider him a “criminal target” in the Russia probe “at this point.” That is an important qualification. As a former prosecutor, I can tell you that during any investigation things are fluid and often depend on new evidence or real-world events. A subject can always become a criminal target as the investigation progresses.

What active steps are you and your fellow committee members taking to limit Russian and foreign agent influence in our elections? Any thoughts on the role social media played in facilitating outside actors and do you think it's time for tougher regulations on Facebook and other social media outlets? Would you support individual privacy protections that many Europeans enjoy?

I’m proud to serve on the House Judiciary Committee, which has jurisdiction over the Department of Justice. We have questioned Attorney General Sessions, Deputy Attorney General Rosenstein, and FBI Director Chris Wray during appearances before our Committee about Russian interference in our democracy. I was glad our Committee recently came together to pass an amendment to the Foreign Agent Registration Act that would close a legal loophole and improve transparency around foreign lobbyists. Ultimately, though, I am deeply disturbed by this Administration’s failure to take the threat of foreign meddling seriously on all fronts.

Platforms like Facebook and Twitter are coming to grips with the fact that, although they are private companies, they can affect billions of people very quickly. They can impact their lives in ways no government can. Discussions about regulating technology companies shouldn’t happen in a vacuum – there are real, technical considerations that need to be addressed.

The EU has a unique legal regime surrounding privacy and information disclosure. I think we can learn a lot from their approach.

So, do you embrace the "Silicon Beach" moniker for the growing tech sector in the Santa Monica area, and what can be done at the federal level to avoid the San Francisco crisis with housing costs?

I love the name! It shows how innovative and impressive our creative constituents are. In terms of housing, I support increased funding at both the state and federal level for additional housing.

Given the role of beach-related tourism industry in your district, what are you doing to ensure the oceans and beaches remain clean?

According to the NOAA, in 2014, the ocean economy contributed $41.9 billion to California’s gross domestic product, nearly half of which came from the tourism and recreation industries. That’s why I am committed to supporting policies that protect the ocean and the environment. One threat to the ocean I am particularly worried about is increased offshore drilling in the Pacific. In the last year, I have sent several letters to the Trump Administration with my California colleagues to express our opposition to this drilling. I’m committed to fighting to protect our coastlines.

Do you really have 634,000 followers on Twitter? How does that feel? Given your Trump tweets, is there any one or two you wish you could take back? What's your favorite?

I have approximately 665,000 followers. Since Trump was elected, I’ve learned to hone my voice on social media to represent my constituents and oppose stupid ideas or outrageous behavior by Trump. I believe we must not normalize what cannot be normalized. Constituents are upset. And I’m upset. I realized the most patriotic thing I could do is to tell the truth.

As somebody who represents a very urban area and who began public service on the Torrance City Council, how do you access the apparent urban/rural divide when it comes to President Trump and other issues?

I am very concerned and alarmed by President Trump’s recent executive order that would cut critical benefits, including housing, that help low-income families. It is a deeply flawed and misguided EO that will harm families. Proposals to cut housing benefits through work requirements, time limits, and rent increases will only increase the ever-growing homelessness and poverty issues Americans are facing in California and around the country. I also reject dividing our nation. Federal policies that help rural families also help urban families, and vice versa.

Do you ever get to Taiwan to visit? What do people there make of your being in Congress?

I still have family in Taiwan and visited a few years ago. My family immigrated to the United States when I was three years old. We first lived in the basement of a person’s home, and my parents sold gifts at flea markets to make ends meet. That business grew into eventually opening up six gift-and-jewelry stores. It occurred to me that my family had achieved the American Dream, from coming here with almost nothing to starting a business that provided for my brother and me. I’m so grateful to the United States because I can genuinely say it was the land of opportunity for my family. It’s one reason I joined the Air Force, because I learned that American ideals are worth defending.

What do you think of the recent tit for tat tariff spat with China? Do you think this has the potential to escalate into a trade war? What are your thoughts on the trade tension between US and China?

As with most of the President’s foreign policy decisions, the tariff spat with China is impulsive and lacks any real plan for success. Instead of pursuing our trade disputes through the World Trade Organization to give our claims international legitimacy, the President has set us on an uncertain path and left our manufacturers and exporters to bear the brunt of it.

What is your role with the Los Angeles ports, and what do think is its biggest challenge now?

The Los Angeles and Long Beach ports are the largest in the U.S. driving economic growth not just in the Southland, but across the nation. At the same time, though, the high volume of traffic coincides with high levels of greenhouse gas emissions. In the next few years, the port and related industries will need to take serious steps to green the infrastructure to ensure that it reduces the climate impact and meets California’s emissions goals.

What effect have the ICE raids has had in our district?

ICE should be targeting individuals who are dangerous, but its current practice of conducting random raids without discretion is instilling fear in our communities. Students are fearful that parents will be deported and are less productive at schools, parents fear seeking medical help, and individuals are less likely to report crimes to the police. All of this makes our communities less safe.

What legislation of significance will be passed before November that will impact Los Angeles – HUD funding or lack thereof, cuts to local sanctuary cities?

Just this week, a U.S. District judge ruled that the Department of Justice cannot deny federal funds to cities with sanctuary type policies.

What is your position on the Torrance refinery?

The Torrance Refinery has been a key pillar of our local economy for generations. Like any major facility anywhere, the Torrance refinery has an obligation to the community and to its workers to maintain the safest possible operations. While recognizing the Refinery’s contributions, this community knows that there are legitimate questions surrounding the use of a highly-toxic chemical, hydrofluoric acid, in its operations.

If the Democrats manage to flip the House in 2018, expect to see and hear a lot more of Ted Lieu. Armed with subpoena power, Congressman Lieu could lead the push to have Congressman Nunes’ midnight White House runs investigated.So, while Nunes faces a formidable challenger to his seat, the real challenge will be Congressman Ted Lieu, waiting for him to return to Washington.

(Sara Corcoran writes for CityWatch and is a correspondent and contributing editor, as well as founding publisher of the National Courts Monitor. She literally grew up in a “legal family.” She is the granddaughter of “Tommy the Cork,” who advised President Franklin D. Roosevelt and is considered an “author of the New Deal.” As a former Real Estate Executive, Sara was a VP at Remington Capital where she was responsible for originating and servicing the mid cap portfolio for a leading hospitality REIT. Concurrently, she did business development for Jack Kemp at Kemp Capital Partners. She received her MBA from the Antai School of Economics and Management in Shanghai, China, and a BA in Political Science from the University of Southern California. Sara also specializes in Forex, Merger Arbitrage, Cryptocurrencies, and Futures and Commodities.) Prepped for CityWatch by Linda Abrams.