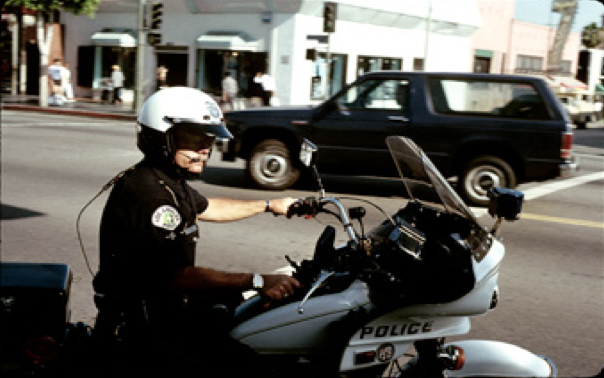 RANTZ & RAVES--The City of Los Angeles and its Department of Transportation has for many years neglected to follow the law when it comes to surveying the thousands of miles of city streets for radar speed enforcement.  The law in California requires all cities to routinely survey streets in order for the police to use radar when enforcing speed laws.

In the Good Old Days back in the early ‘70’s when I was a young LAPD Motorcycle Officer on that old Harley Davidson that broke down from time to time there was no radar speed enforcement in the City of Los Angeles.  The only way to cite a motorist for a speeding violation was to chase and clock the speeding violator or estimate the violator’s speed.That was the only way it was done back in the days of mandatory traffic patrol hours from 7:00 am to 9:00 am and 4:00 pm to 6:00pm.  Those were the days when the freeways ran smooth for the most part and surface streets were clear of most traffic congestion after the patrol hours due to the city’smanageable population and number of vehicles on the roads.  The roads could easily handle the traffic volume and travel time was measured by the miles driven and not so much by the time it took to arrive at your destination like it is today.

It was fun car times with car clubs cruising Van Nuys Blvd and Hollywood Blvd and Whittier Blvd for many hours.  It was hanging out at Bob’s Big Boy on Van Nuys Blvd and in Toluca Lake on Riverside Drive.  Yes, those were the days when traffic ran smooth and KMPC Radio had a chopper in the air reporting on traffic conditions along with KGIL Radio with their air unit checking out the Valley roadways for traffic incidents.  There was KNX Radio and KFWB with Rhonda Kramer and so many others reporting on the moderate traffic in Los Angeles.

Today we see so many ways to check traffic on our cell phones and with dedicated traffic reporters on local radio and TV stations.  KFI in the sky and KNX Radio with Denise Fondo and the air units.  How times have changed.  While I reminisce about the good old days and take you back in time, it is time to bring you up to date with the traffic gridlock that strangles all of the cities in Southern California.  I am talking about the roadways in your neighborhoods and the freeways that carry us from town to town on the 101 and 405 and 118 and 10 and 60 and on and on.  If Cal Trans had completed the other scheduled freeways originally planned for Southern California, it will never happen now, like the one down Santa Monica Blvd that would have taken a load off the 101 and 10, who knows what out traffic situation would look like today.  Back to contemporary times and the reality we live with today in Los Angeles traffic.

While there is a constant push by many elected officials for more buses and trains and public transportation like other parts of the country, we are a car culture in Los Angeles and California that is not changing in the near future.  With those shiny cars lined up along Roscoe Blvd at Galpin Motors and other car dealers there is the constant temptation to have your own means of transportation and privacy and safety of a personal vehicle.  Many years from now, our residents in Los Angeles and throughout California might be receptive to public transportation.  But, it is not happening now to any great extent.  One Los Angeles City Councilmember recently stated that she was afraid to ride the public transit system with her 8 year old daughter due to her safety concerns.  Just look at the 7 day week traffic on our local freeways.  From early morning to late evening, traffic is a constant reminder that we are in a traffic mess and it is not improving as time passes.

This brings me back to the Zero Vision or Vision Zero plan by Mayor Eric Garcetti.  While our Mayor is looking at his next political office, that is the way it is with term limits, he needs to address some serious issues in Los Angeles.  Traffic one of the big ones.  It is at the top of the list along with the Exploding Homeless population, Crime increase, selection of the next LAPD Chief, Federal Immigration issues and the impact on Los Angeles and so many more issues and concerns dealing with the lives of people living and working in Los Angeles.

Vision Zero or like I like to say Zero Vision is the plan to eliminate fatal traffic collisions in Los Angeles.  While I would like to see that happen, with the drivers in Los Angeles and all the police pursuits, can it truly happen here?  We can only hope for the best.

Now that many of the out of date radar surveys have been brought up to date by the city’s Department of Transportation  hundreds of Los Angeles streets again qualify for radar speed enforcement by the LAPD.  With the thousands of dollars of overtime money being dedicated to speed enforcement you can be assured that the LAPD Officers will be out on the local roads enforcing the vehicle code with an emphasis on speeding violations.  Consider this your warning.  If you speed, your chances of being cited are much greater than in the past.  There is a rather unknown way an officer can note your violation without costing you money or time in court or traffic school.  I will discuss this in my next edition of RantZ and RaveZ.Drive safe and remember that traffic fines can run into hundreds of dollars with or without traffic school.

(Dennis P. Zine is a former and retired LAPD Supervisor, former and retired 12-year Los Angeles City Councilman and current General Manager at Bell Canyon in Ventura County. He is a candidate for the upcoming Assembly District 45 election.) Edited for CityWatch by Linda Abrams.