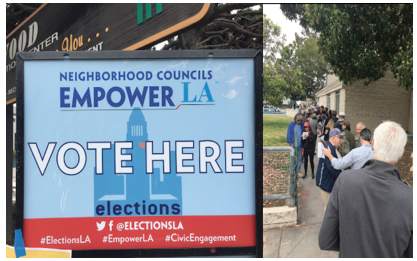 EASTSIDER--If ever there was a system that is broken beyond repair, it is DONE.  As I have reported before, their election systems and Election Grievance Panels make a mockery of due process of law, and Ryu’s Committee knows it!

Of course there was one little teeny-weeny problem with all this.  DONE’s very own Election Challenge Portal states unequivocally that:

Can the Regional Grievance Panel determination be appealed?

No, the Regional Grievance Panel determination cannot be appealed.

No kiddin’.  For those with morbid curiosity, here’s the video of the 2nd Hearing:

Looking at the 2016 election cycles, which were a mess even if you don’t factor in the online voting debacle, demonstrate they can’t run a fair and square election.  For example, their 2016 Election Manual runs to 34 pages of mostly gobbledygook definitions, and was being revised as late as April 29th.  This with the cycle starting in March and ending in June.

I can personally attest that as late as scant weeks before some of the NC polling dates, the skeleton DONE staff were running around to various Neighborhood Councils giving contradictory information as to how the elections would be run, and whether and how much money the Councils could actually spend on their elections.  Good one.

And that doesn’t even factor in the Manual doesn’t even cover Challenges.  Nope, I’m not making it up!  On page 27 the Elections Manual proudly announces you have 5 days to file a challenge, but you have to go to the separate Elections Challenge Portal to find  “Specific instructions regarding how to file a challenge and how the challenge will be handled are provided on the Portal.”

Think rats running around a Skinner Box, with the Psych Professors taking notes. This wouldn’t pass muster at the local Church auxiliary or Homeowners Association or a Student Body President’s Election.

Then There is Online Voting and ‘Stakeholders’

Just look at the pile of manure called Online Voting, by a bogus firm that botched the first round so badly the City Clerk called a halt.  Not only that, the same vendor slurping up City Funds is so morally bankrupt that the California Secretary of State recently Certified a CalPERS election using their online voting, and at the same time took the unprecedented step of Refusing to Certify the Election Process!

I have covered the second class status of Neighborhood Councils and their election process before, and there is absolutely no way the City Council Committee can be unaware of the fact that if these were regular City Council Elections, both the City Ethics Committee and the Superior Court system would throw out the results so fast heads would spin.

Look, the City Clerk is perfectly suited to conduct elections of registered voters.  That’s what they do.  But Neighborhood Councils include “stakeholders” which opens up a whole can of worms the City Clerk has no interest in or idea of how to handle.  Not so long ago, CityWatch Contributer Bob Gelfand and yours truly wrote a couple of articles on the subject.

About a week ago, Beth  Cone Kramer very politely wrote about  DONE setting up a Grievance Panel against the Venice NC, even though the allegations did not meet the baseline criteria, and ultimately DONE had to eat their words and dump the Panel.

More recently, the 2016 Elections Administrator,Jay Handal, weighed in with the real policy issues.  His piece is called More to the Venice NC vs. DONE Scuffle than a Few Policy Differences.

And let’s not forget the Skid Row Subdivision experience, where Jose Huizar weighed in to use online voting to disenfranchise the very homeless who were trying to break away from the Downtown Developers

Finally, there are all the nonsense going on with San Pedro’s NC and the BONC.

Is Ryu and His Committee the Knights in Shining Armour?

So far, the efforts of the Committee have been less than stellar.  For example, with Council File 04-1935-S1, which wound up making recommendations contrary to the evidence in front of the Committee:

- Full greenlight to use online voting

- Have the City Clerk Run Elections

- DONE to do intensive and expensive Outreach

Ryu recently sent out emails to some NC officials, actually soliciting input as to what changes should be made to the NC System.  Taking him at his word, I strongly urge you to complete his Survey.  It’s an actual, real survey, as opposed to the DONE/BONC persiflage.  Let’s give the Councilmember a chance.

Of course I am personally less than sanguine.

As we all know, ever since Eric Garcetti moved from ‘gifting’ us in CD 13 and became Mayor, Neighborhood Councils have not had a real advocate as General Manager of DONE.  Witness Grayce, Liu, who at best can be described as the Mayor’s head cheerleader.  Just look at a recent, typical, weekly message from her here.

I think the Neighborhood Councils need a General Manager that will represent us, not the Mayor’s agenda.  Assuming Garcetti can be bothered as he jets over LA to whatever next gig he’s angling for.

As to my other personal recommendations:

Online Voting should be scrapped unless someone finds a quick, simple way for stakeholders to sign up and vote easily.  This lets out DONE, BONCE and the City Clerk.

The City Clerk needs to come up with a way to handle stakeholders without having to electronically transmit your life secrets to sign up for a NC election.

The Grievance Panel system, for both elections and grievances, is an ongoing, constitutionally questionable time bomb and should be abolished.  Further, someone needs to conduct an inquiry exactly how this abomination came to be.

DONE staff should also butt out of the Agenda and Meetings of the Neighborhood Councils.  They have no business calling up and canceling meetings, showing up at meetings where they only prove they don’t know what they are talking about, or trying to control the NC’s.  They don’t have the staff, they don’t have the knowledge, and they sure don’t have the skills to do any of this stuff.