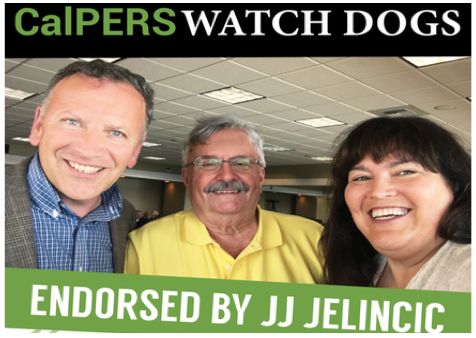 EASTSIDER-CalPERS is having an election which will directly affect more than 1.5 million Californians who are part of the CalPERS system, have huge tax implications for the rest of us, and probably affect the fate of a $300 billion dollar plus institution. I am urging everyone to vote for Michael Flaherman and Margaret Brown for the Board. They are serious about addressing CalPERS’ problems, and have the right background to truly make a difference.

Few are aware that the CalPERS election for these two seats is taking place as we speak: ballots go out September 1. These board elections are usually a ho hum insider game of musical chairs.  Faces change (though usually not), but whoever wins is the same as the rest and the Board stays as it was before. No change. No oversight. No fiduciary duty. The members kowtow to staff. Business is shrouded in secret.

We simply can’t afford this “go along to get along” exercise anymore, elections in which only 15% of eligible voters even bother to get out and vote. This time there’s something we all can do.

Here’s Why We Need Change

Shortly after his “‘retirement” in 2008, CalPERS CEO Fred Buenrostro and another former Board member turned CalPERS placement agent, Alfred Villalobos, were indicted in a pay-to-play scheme involving, you guessed it, Private Equity! What’s scary is that this prosecution lasted until 2016, when Buenrostro was finally sentenced to 4 1/2 years in federal prison. In the interim, Villalobos committed suicide on the eve of his own court appearance. Talk about a soap opera. CalPERS did everything in its power to sweep the affair under the rug.

Well, flash forward to 2014. While the scandal was playing out in the courts, and the new CEO, Anne Stausboll, was still hiding the details of their private equity investments.

I wrote a scathing letter to the CalPERS Board of Directors, calling them out over Stausboll’s promise of “openness and transparency” and contrasting her subsequent delivery of secrecy and hiding behind lawyers.

The CalPERS Board has maintained roughly the same stance from 2010 until today, still hiding the details of their Private Equity investments, shielding the details of their secret business dealings, and voting 13-0 to let their General Counsel Matthew Jacobs run the institution under the cloak of attorney-client privilege, keeping the public in the dark. It has also allowed Jacobs to conspire with staff in deciding what pablum to feed the Board.

I am compelled to note that the current President of the Board, Rob Feckner, was the President of CalPERS back in 2009 when the Buenrostro/Villalobos scandal broke, and has obviously learned nothing in the intervening years to ensure that it doesn’t happen again. The only thing he’s done is get re-elected President time and again.

So How Does the September Election Work?

There are 13 Board seats on CalPERS, seven of which are appointed, so we can do nothing about them -- and do nothing is the mantra of those appointed members. The lone exception is William J. Slaton, who has done something, namely trying to fire retiring member JJ Jelincic for speaking out and asking questions. So, let’s hear an “amen” for the fake probity of our elected officials who handed carte blanche to CalPERS staff.

Of the six remaining seats, two Board members are elected by everyone in the system, and it is those two seats that are up this year, with ballots going out September 1, and the new four-year term of office starting in January 2018. Ballots are due back on October 2, with a runoff, if necessary, to be held on November 10.

Position A is the seat previously held by our friend willing to speak truth to power, JJ Jelincic, who finally got tired of non-stop personal attacks from ethically-challenged Board Members. He decided it’s time to retire while he has some good years ahead of him, and the possibility of having a life.

Fortunately for us, there is a candidate on the ballot who will continue in JJ’s tradition: asking questions and demanding answers from staff. Michael Flaherman is a former Board member who served eight years and left the Board in 2003, well before the decline of CalPERS and the ascendancy of Fred Buenrostro. From there, he went into business with the firm New Mountain Capital and did well.

With this background, he knows how CalPERS works, and during the last couple of years has used the public comment portion of Board meetings to call the agency to task for their bizarre investment strategies, particularly in the area of Private Equity. Best of all, he obtained a Harvard fellowship to study financial corruption, and continues that work at UC Berkeley.

Just what the doctor ordered, and as the frosting on the cake he has been endorsed by none other than JJ Jelincic himself. You can find his campaign website here.

If you would like to ask him questions, his campaign email is [email protected]

Position B is a seat that has an incumbent, one Michael Bilbrey. He has been on the Board since 2011, and was obviously there during the depths of the Buenrostro/Villalobos scandal. Yet, as I looked back through CalPERS files, I couldn’t find a single instance in which Mr. Bilbrey voted against anything the staff wanted to do, or against the Board. As such, I would characterize him as an “empty suit.” The only reason I think he got on the Board in the first place was that he was president of the California School Employees Association (CSEA), an organization that did their members and us no favor by sliding him into a Board seat. Considering what CalPERS has done over the last few years, clearly Bilbrey has no clue what the phrase “fiduciary duty” means.

On the other hand, we are lucky again to have another candidate endorsed by JJ who has also been vocal in calling out the Board when they are dead wrong. Her name is Margaret Brown, and you can find her website here.

Margaret has the public sector financial chops to know what questions to ask of staff and how to hold them accountable. She has worked in fiscal administration, mostly with school districts, including a survival course administering the LASUD’s $20 billion investment bond program. (And believe me, that bunch has a Byzantine bureaucracy that almost makes CalPERS’ look okay.) The good news is that there is no way the CalPERS staff is going to be able to slide anything by her. She will respond to any questions you have at her email address, [email protected]

So, there you have it -- two viable candidates for the CalPERS Board of Directors. Candidates who, if elected, will provide the openness and transparency that is so lacking. These people have the knowledge to ask penetrating questions of the staff and their bland, meaningless reports. They understand fiduciary responsibility.

If I sound impassioned, it’s because I am. If we can get one or two real, knowledgeable and independent members elected to the Board, the whole game of hiding and lying changes. The rest of the elected Board members can either step up or run the risk of being unelected the next time out.

The stakes are high. Fred Buenrostro and Alfred Villalobos did not happen in a vacuum; rather, they were a result of a cult of secrecy. CalPERS cannot afford to run the risk of another scandal. Public sector pension plans are already under high levels of scrutiny and attack. One more big-time scandal or series of smarmy conduct revelations could have a devastating effect. If the General Counsel and the Board are incapable of understanding this fact, then shame on them.

Let’s see if some Bernie-style grassroots ground-up people power can make a difference.

IF YOU CAN, VOTE!  If you can’t vote, find someone who can, and get them to VOTE!