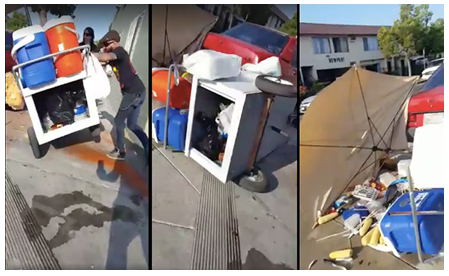 BELL VIEW--Hate. It’s everywhere these days. When Carlos Hakas overturned an immigrant street vendor’s food cart in a fit of rage over a slight inconvenience, the inevitable video went viral and the tsunami of hatred started flowing in both directions. Don’t get me wrong – Carlos is easy to hate. I’ve just burned through so much hate since November, I’m having trouble keeping the flame going. (Photo above: Hakas overturns vendor cart.)

When Trump gave his speech to the Boy Scouts last week, the only response I could muster was sadness and disgust. Something about it hit me on a visceral level – like Sandyhook or the Tamir Rice shooting. I understand no one died because of Trump’s speech, but something about the disruption of innocence sent me over the edge. Sneering at a former president, trashing the press, airing old grievances, and somehow managing to sully the concept of “loyalty” in the Boy Scout oath.

I was never much of a Boy Scout – but I went through it as a kid. I have two boys of my own now, and shudder in horror at the thought of them having to stand and listen to this president of the United States.

Each day of the Trump administration has felt like a gut punch. I realize my horror, on some level, is a symptom of my privilege. I’ve been obsessed with politics since I first saw the Willie Horton ad. But even through the dark days of the Bush/Cheney years I never felt as if my own identity were being stomped on by a gang of drunken cannibal frat boys. Now I’m numb to it.

What was it today? Transgender soldiers – soldiers! – thrown into the wood chipper. But the Boy Scout speech felt different. Surely, I thought, someone who supports this guy would be disgusted by this.

I think I get it now. We live in a world where people run down cyclists, dump over food carts, mock the disabled. We feel free to call people we’ve never met the most vile names. And it goes both ways.

When I heard John McCain had brain cancer, my first thought was whether a Democrat could win his seat in the Senate.

Watching Trump speak to the assembled Boy Scouts, the first thought that occurred to me was that he reminded me of a fat, foppish little king. A gone to seed Louis XVI. And then it hit me. That’s the core of his appeal to a lot of his fan base.

As an American, I’ve always felt a native aversio  n to royalty. Or at least I thought it was an American trait. But maybe I’m an outlier. After all, you can’t walk through a supermarket checkout line without four different royals smiling at you from the front pages of the tabloids.

It looks as if millions of Americans feel the need to be ruled by someone. And Trump fits the bill for now.