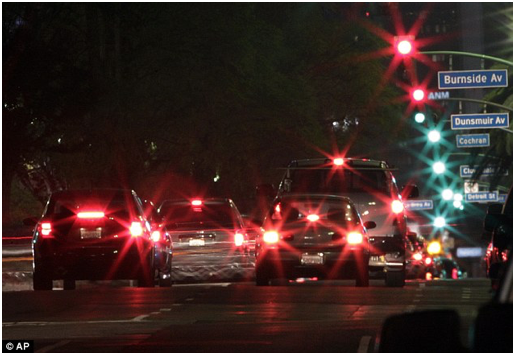 CORRUPTION WATCH-Starting in 2014, Judge Alan Goodman and Judge James Chalfant warned us that Super Gridlock was being planned for Los Angeles, but we weren’t listening. Perhaps, we missed them sound the alarm. They used polite legalese.

In January 2014, Judge Goodman in rejecting the Hollywood Community Plan Update said that the city based its plans on fatally flawed data and wishful thinking which subverted the law. Maybe, we would have heeded Judge Goodman, if he had he taken the approach of Paul Revere and used a more stirring phase like, “The Redcoats are coming.” (By the way, Revere did not say the “British are coming,” since that would have been meaningless as we all were British.) Anyway, Revere was clear that the colonists were under attack. Perhaps, Judge Goodman should have used alarmist words, like “Lies and Myth Are Attacking Hollywood.”

Fifteen months later in April 2015, Judge James Chalfant rejected the Hollywood Millennium Towers due to the devastating impact of traffic gridlock from this single project. In using the prudent words of judicial writing, Judge Chalfant set forth the irresponsible and unlawful way the City was bringing gridlock to Hollywood. In fact, the judge found that the traffic gridlock on the Hollywood Freeway would impact both the San Fernando Valley and DTLA.

In 2011, “Caltrans stated that trip generation, trip distribution, choice of travel mode, and assignments of trips to the 101 Freeway should be analyzed for all on/off ramps within five miles of the Project site, preferably using the Caltrans Traffic Impact Study Guide ("TISG").” Chalfant 4-30-2015 Decision, page 13.

Such boring words, but a judge’s role is to be judicious and make rulings based on facts and the law.  As the judge ruled, the City was not free to ignore the directive from CalTrans, which in essence had told the City: “The project will likely bring gridlock to much of the surface streets in Hollywood. Thus, the City must conduct a study of traffic near all the freeway ramps.”

The City, however, took its cue from the old Laugh In TV show and gave CalTrans and the public the Flying Fickle Finger of Fate by refusing to follow CalTrans’ directive. The judge noted, “The [City’s] FEIR fails to analyze traffic impacts to the 101 Freeway as Caltrans directed....”

In layman’s words, the City broke the law in order to conceal the fact that The Millennium Project would bring gridlock to much of Hollywood. Had Judge Chalfant been Paul Revere, he could have entitled his decision, “Gridlock is Coming, Gridlock is Coming.”

Judge Chalfant emphasized the gridlock threat, noting that CalTrans directed the City to analyze the traffic impacts of the Millennium Towers Project in conjunction with another 58 proposed Hollywood projects.  4-30-2015 Chalfant Decision. The City refused to assess the impact of any other projects.  The City’s motivation is clear. Since the Millennium Project by itself would make the Hollywood Freeway non-functional and bring unbearable traffic tie-ups to surface streets, when all the other small and large projects were included, the results of an honest traffic study would show that The City was deliberately proposing horrible gridlock.

Since the general public does not spend its hours hunting down and studying judicial opinions, almost no one knows that Judge Chalfant’s 4-30-2015 decision rejecting the Millennium Tower lays bare the City’s aggressive plans to bring unbearable traffic gridlock to this portion of Los Angeles.

The Palladium Project replicas the same traffic nightmare which caused Judge Chalfant to reject the Millennium Towers and it is only two blocks to the south. The same with The Crossroads Project – which is about one block from Hollywood-Highland intersection which has now the distinction of being named the most dangerous in the nation. The scores of smaller In-Fill projects also add a huge strain on Hollywood traffic. The City’s game plan is simple – issue false and misleading plans in order to deceive the public.

How Does the Update to the Hollywood Community Plan Deal with Vehicle Traffic Gridlock?

When they City says “encourage” it means people are not acting the way that the City wants. Thus, they need to be encouraged.  That takes the form of providing more Bike Lanes to “encourage” people to ride bicycles in major streets. Judge Chalfant did not find the problem was with lack of bicycles, the problem of vehicle gridlock. Taking away travel lanes while attracting thousands of more cars into Hollywood will magnify gridlock.

When the city ignores the most significant legal decisions impacting development in Hollywood, we realize that the City has no solution for gridlock. They don’t acknowledge it as they don’t want people to think about gridlock. Cars are evil, and hence, we all will be encouraged to be good citizens and walk, bike, and use mass transit.

The Revival of Lies and Myths to Subvert the Law

Just as the City ignores Judge Chalfant, it ignores Judge Goodman who rejected the Hollywood Community Plan due to its use of fatally flawed data. Presently, the City bases it Hollywood Plan firmly on additional fraudulent data.  Here’s the structure of the fraud.  By pretending Hollywood is about to experience a population crush, the City is trying to stampede Hollywoodians into acquiescing in the mind-numbing density.  This ploy is an old one.

In 2012, the City falsely represented the population data from Southern California Association of Governments (SCAG) by claiming that in 2005 Hollywood’s population was 224,000 people, while the actual SCAG figure was only 200,000 people, which was a decrease of 10,000 people from five years early in 2000.   Judge Goodman found that the City had actively concealed the real population data from the public.  The City is perpetrating the same fraud in the new Hollywood Plan by providing an ersatz rationalization with more high rise projects and protected bike lanes.

However, the City’s behavior becomes more egregious.  Since the 226,000 population projection for 2040 does not justify all the mega-projects which the City is approving, the City asserts that the “reasonable development” is 243,000 people by 2040. From whence cometh is figure?  No source.  Table 2-1 of the June 2017 HCPlan provides no support. The City also conceals the high vacancy rates for new high density construction.

The objective of the continued population frauds is the same today as was in 2012 – to deceive people into approving absurd increases in high density construction and more Bike Lanes along with the fiction that Angelenos should walk more, and thus, unbearable traffic gridlock is good for us.  I suppose that if I have to walk an extra 20 blocks after parking my car, the City is doing me a favor by increasing my cardiovascular exercise.

When one reviews the City’s Mobility Plan 2035 and its provision for Bike Lanes, when one sees the fraudulent population data in the Hollywood Community Plan to support more Bike Lanes, and when one looks at Hyperion in Silver Lake, at Mar Vista and at Venice, then one realizes that the City is pursuing a plan for never-ending traffic gridlock with a religious fervor that trumps facts and logic.

We need to recognize the religious zeal of the Garcetti Administration to bring about its new order.  Like other religious fanatics, it has no doubt in its battle against the forces of evil, e.g. automobiles and detached homes. The purity of its cause justifies its mis-information, deception and subversion of the law.  If endless traffic congestion is the cost we must pay for its vision, then so be it.

(Richard Lee Abrams is a Los Angeles attorney and a CityWatch contributor. He can be reached at: [email protected]. Abrams views are his own and do not necessarily reflect the views of CityWatch.)